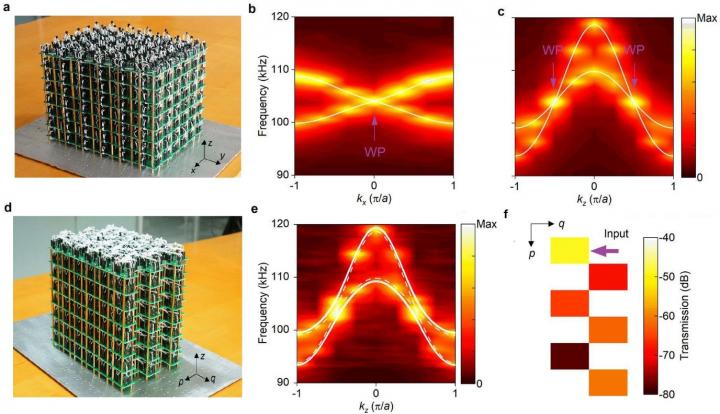 The elementary particles that build the universe have two types: bosons and fermions, where the fermions are classified as Dirac, Weyl, and Majorana fermions. In recent years, Weyl fermions are found in condensed matter systems Weyl semimetals as a kind of quasiparticles, and they manifest themselves as Weyl points from dispersion relations. In contrast to the high-energy physics which requires the stringent Lorentz symmetry, there are two types of Weyl points in condensed matter systems: type-I Weyl points with symmetric cone-like band structures and type-II Weyl points with strongly tilted band structures.

Type-II Weyl points have been observed in condensed matter systems and several artificial periodic structures, such as photonic and phononic crystals. However, these type-II Weyl points are not symmetry-related, and they have small separations and different energies. Thus, it is challenging to distinguish the type-II Weyl points with other degenerate points and observe the related phenomena such as topological surface states.

Recently, Dr. Rujiang Li and Prof. Hongsheng Chen from Zhejiang University, Dr. Bo Lv and Prof. Jinhui Shi from Harbin Engineering University, Prof. Huibin Tao from Xi'an Jiaotong University, and Prof. Baile Zhang and Prof. Yidong Chong from Nanyang Technological University observe the ideal type-II Weyl points in classical circuits by utilizing the high flexibility of circuit node connections. For a circuit structure with periodic boundaries in three dimensions (Fig. 1a), this Weyl system only has two bands. Due to the protections from mirror symmetries and the time-reversal symmetry, there exists the minimal number of four type-II Weyl points in momentum space and these Weyl points reside at the same frequency. Experimentally, they prove the existence of linear degenerate points and the strongly tilted band structure by reconstructing the band structures of the circuit system (Fig. 1b-c), which imply that these four Weyl points are ideal type-II Weyl points. Besides, they fabricate a circuit structure with an open boundary (Fig. 1d) and observe the topological surface states within an incomplete bandgap (Fig. 1e-f). These phenomena further imply the existence of ideal type-II Weyl points.

Circuit system has high flexibility and controllability. Compared with other experimental platform, lattice sites in a circuit system can be wired in an arbitrary manner with arbitrary numbers of connections per node and long-range connections, and the hopping strengths are independent of the distance between the nodes. Precisely because of this flexible and highly customizable connectivity, and the distance independent hopping, a circuit lattice that can observe the ideal type-II Weyl points are easily fabricated. This circuit platform can be used to the further study of Weyl physics and other topological phenomena.