Humans and climate drove giants of Madagascar to extinction 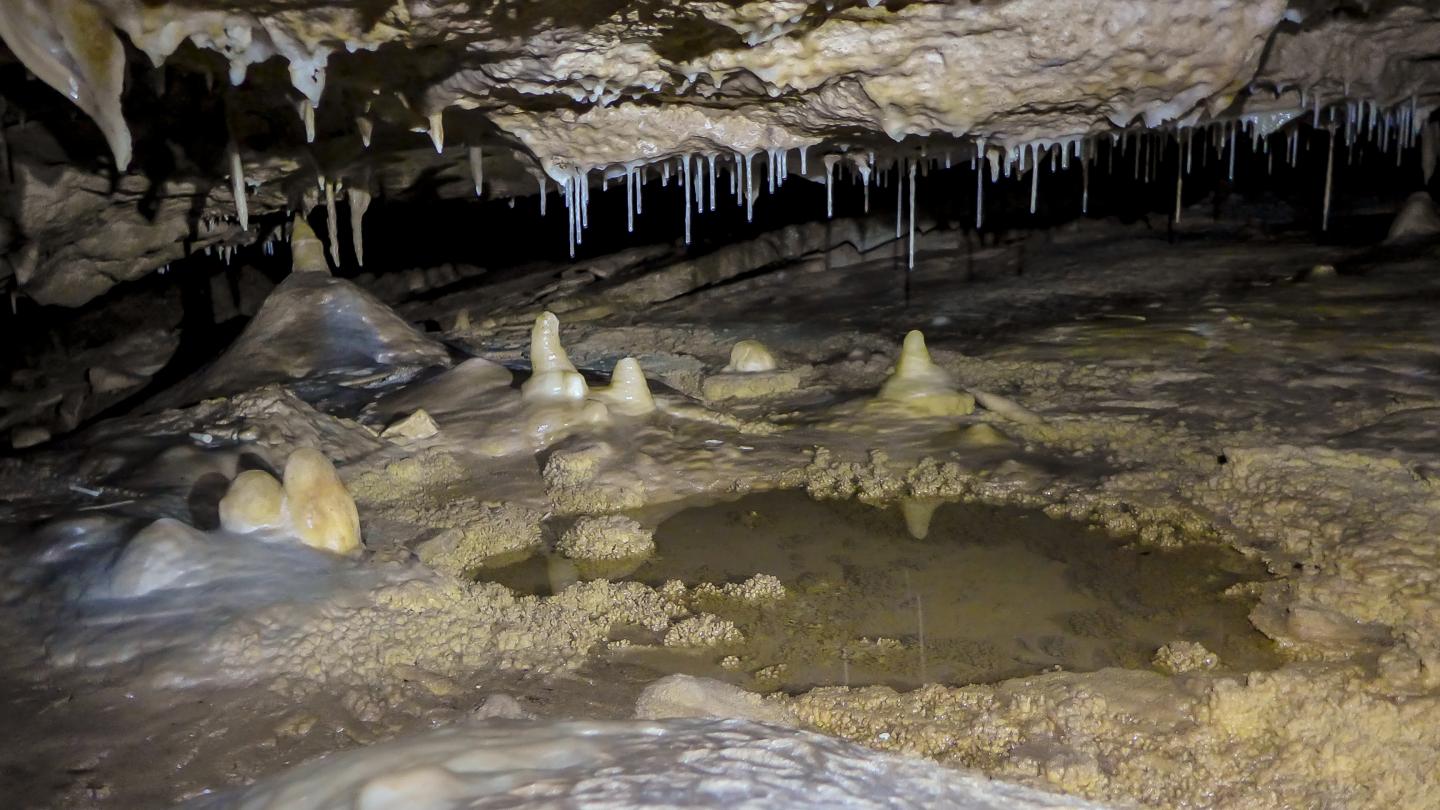 IMAGE: Investigating the drivers of extinction: By analyzing stalagmites from the La Vierge Cave located on Rodrigues the scientists reconstructed 8000 years of the region's past climate.

Nearly all of Madagascan megafauna - including the famous Dodo bird, gorilla-sized lemurs, giant tortoises, and the Elephant Bird which stood 3 meters tall and weighted close to a half ton - vanished between 1500 and 500 years ago. Were these animals overhunted to extinction by humans? Or did they disappear because of climate change? There are numerous hypotheses, but the exact cause of this megafauna crash remains elusive and hotly debated. The Mascarene islands east of Madagascar are of special interest because they are among the last islands on earth to be colonized by humans. Intriguingly, the islands' megafauna crashed in just a couple of centuries following human settlement. In a recent study published by Science Advances, a team of international researchers found that it was likely a "double whammy" of heightened human activities in combination with a particularly severe spell of region-wide aridity that may have doomed the megafauna. The researchers rule out climate change as the one and only cause, and instead suggest that the impact of human colonization was a crucial contributor to the megafaunal collapse. Hanying Li, a postdoctoral scholar at the Xi'an Jiaotong University in China and the lead author of this study, pieced together a detailed history of the regional climate variations. The primary source of this new paleoclimate record came from the tiny Mascarene island of Rodrigues in the southwest Indian Ocean approximately 1600 km east of Madagascar. "An island so remote and small that one will not find it on most schoolbook atlases," says Gayatri Kathayat, one of the co-authors and an associate professor of climate science at Xi'an Jiaotong University.

Li and colleagues built their climate records by analyzing the trace elements and carbon and oxygen isotopes from each incremental growth layer of stalagmites which they collected from one of the many caves from this island. The bulk of these analyses were conducted at the Quaternary Research Group at the Institute of Geology at the University of Innsbruck, led by Prof. Christoph Spötl: "Variations in the geochemical signatures provided the information needed to reconstruct the region's rainfall patterns over the last 8000 years. To analyze the stalagmites we used the stable isotope method in our lab in Innsbruck". Despite the distance between the two islands, the summer rainfall at Rodrigues and Madagascar is influenced by the same global-wide tropical rain belt that oscillates north and south with the seasons." And when this belt falters and stays further north of Rodrigues, droughts can strike the whole region from Madagascar to Rodrigues," Hai Cheng explains, the study's senior coauthor. "Li's work from Rodrigues demonstrates that the hydroclimate of the region experienced a series of drying trends throughout the last 8 millennia, which were frequently punctuated by 'megadroughts' that lasted for decades," notes Hubert Vonhof, scientist at Max Planck Institute of Chemistry in Mainz, Germany and coauthor.

The most recent of the drying trends in the region commenced around 1500 years ago at a time when the archaeological and proxy records began to show definitive signs of increased human presence on the island. "While we cannot say with 100 percent certainty whether human activity, such as overhunting or habitat destruction, was the proverbial last straw that broke the camel's back, our paleoclimate records make a strong case that the megafauna had survived through all the previous episodes of even greater aridity. This resilience to past climate swings suggests that an additional stressor contributed to the elimination of the region's megafauna," notes Ashish Sinha, professor of earth science at California State University Dominguez Hills, USA. "There are still many pieces missing to fully solve the riddle of megafauna collapse. This study now provides an important multi-millennial climatic context to megafaunal extinction," says Ny Rivao Voarintsoa from KU Leuven in Belgium, a native of Madagascar, who participated in this research. The study sheds new light on the decimation of flora and fauna of Mauritius and Rodrigues: "Both islands were rapidly stripped of endemic species of vertebrates within two centuries of the initial human colonization, including the well-known flightless 'Dodo' bird from Mauritius and the saddle-backed 'Rodrigues giant tortoise' endemic to Rodrigues," adds Aurele Anquetil André, the reserve manager and chief conservator at the Francois Leguat Giant Tortoise and Cave Reserve at Rodrigues.

"The story our data tells is one of resilience and adaptability of the islands' ecosystems and fauna in enduring past episodes of severe climate swings for eons - until they were hit by human activities and climate change", the researchers conclude.