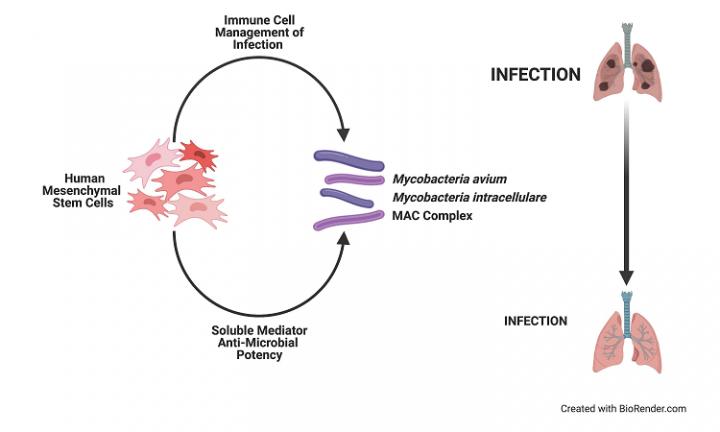 Durham, NC - A study released today in STEM CELLS Translational Medicine offers hope for those suffering from a chronic, difficult to treat condition called non-tuberculous mycobacteria (NTM) lung infection. The study describes how researchers at Case Western University developed a new model of NTM lung infection and then used it to show how effective human mesenchymal stem cells (hMSCs) are in treating this condition - and even which donor cells might be best for doing so.

NTMs are naturally occurring, and everyone inhales them into their lungs as part of daily life. For most people, they are harmless. But in a small number of vulnerable individuals, such as older people or those with cystic fibrosis (CF) or COPD, NTM bacteria can settle in the lungs and cause infection. While not contagious, more than 100,000 people are living with NTM lung disease in the U.S. alone, and that rate appears to be increasing.

"NTM infections can be very difficult to resolve," said Tracey L. Bonfield, Ph.D., the study's corresponding author. "Treatment typically requires taking multiple antibiotics, often for years. Patients who suffer from chronic NTM infection not only deal with the consequences of the disease, but also the toxicity, as well as inefficiency and side effects of the antibiotics used to treat it."

In the search for better therapies, some researchers are focusing on hMSCs, which are collected from adults and can be coaxed into becoming a variety of cells types. hMSCs have significant potential for treating infection and inflammation, Dr. Bonfield said. "They are dynamic storehouses of anti-microbial activity. They are unique in their capacity to respond to infection by secreting multiple bioactive factors, contributing to the host environment. That gives hMSCs a clinical advantage over traditional pharmaceuticals."

Previous studies by the Bonfield team described the potential for hMSCs and their secreted products ("supernatants") to treat other types of lung infections including Pseudomonas aeruginosa and Staphylococcus aureus, but these studies are the first to describe the ability of hMSCs to manage two of the most problematic groups of NTMs, Mycobacterium avium (M. avium) and Mycobacterium intracellulare (M. intracellulare). Like these current studies, hMSCs demonstrated significant anti-microbial, anti-inflammatory and anti-fibrotic potential, both in culture medium (in vitro) and in animals (in vivo). Further, they also documented that hMSC treatment improves the effectiveness of antibiotics, leading to a decrease in the dose necessary for eradicating bacteria.

At the same time, those studies pointed out that not all hMSC preparations have the same level of potency or sustainability. "This suggested to us that it is essential to identify the appropriate hMSC donor and subsequent preparation for disease specific applications. That was the goal of our current study," said Dr. Bonfield.

Both M. avium and M. intracellulare are slow growing bacteria, so researchers have found it difficult to study what happens in sustained NTM infections because in small animals the bacteria clear up quickly, while larger animals are too expensive for defining dosing, timing and duration of a new treatment, Dr. Bonfield noted. So, her team first needed to develop new models of M. avium and M. intracellulare lung infections that would effectively allow them to study this issue.

"In the earlier studies we had developed an innovative protocol in which M. avium and M. intracellulare can be evaluated over the course of a week instead of the typical four to six weeks," Dr. Bonfield explained. To sustain infection in vivo for chronic disease required an additional innovation "We did this by embedding NTMs into beads of a polysaccharide extracted from seaweed called agarose, and then injecting them into mice with CF. The beads degrade gradually, releasing the NTM into the mice and thus extending the time of infection and inflammatory response. This modeling system has been very efficient in generating acute and chronic scenarios of infection in all of our models."

The researchers then went on to identify donor-specific hMSC potency against M. avium and M. intracellulare, once again in vitro and in vivo using CF mice. "Every donor hMSC preparation has a unique profile in terms of how the cells respond to pathogens, which likely translates into their successful potency and how the patient responds to hMSC treatment," Dr. Bonfield said.

"Focusing on hMSC response to NTMs and efficiency of in vitro and in vivo anti-NTM activity provides direction for identifying the optimal hMSC signature for anti-NTM therapy. Data gained from our study begins to define this unique hMSC fingerprint."