Hubble studies gamma-ray burst with the highest energy ever seen 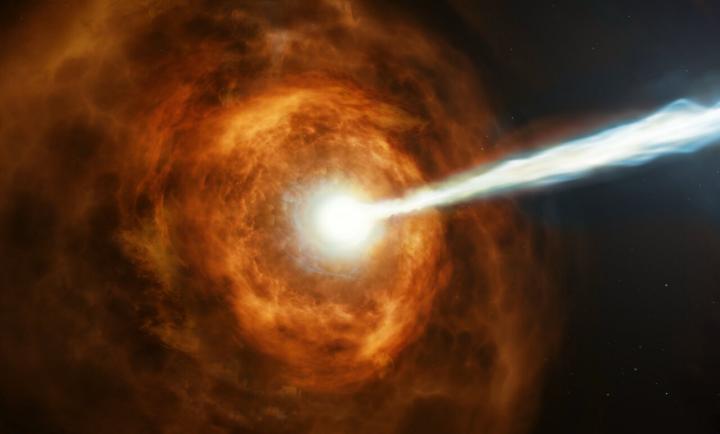 IMAGE: New observations from the NASA/ESA Hubble Space Telescope have investigated the nature of the powerful gamma-ray burst GRB 190114C by studying its environment.

New observations from the NASA/ESA Hubble Space Telescope have investigated the nature of the gamma-ray burst GRB 190114C.

Gamma-ray bursts are the most powerful explosions in the Universe. They emit most of their energy in gamma rays, light which is much more energetic than the visible light we can see with our eyes.

In January 2019, an extremely bright and long gamma-ray burst (GRB) was detected by a suite of telescopes, including NASA's Swift and Fermi telescopes, as well as by the Major Atmospheric Gamma Imaging Cherenkov (MAGIC) telescopes. Known as GRB 190114C, some of the light detected from the object had the highest energy ever observed: 1Tera electron volt (TeV) -- about one trillion times as much energy per photon as visible light. Scientists have been trying to observe such very high energy emission from GRB's for a long time, so this detection is considered a milestone in high-energy astrophysics.

Previous observations revealed that to achieve this energy, material must be emitted from a collapsing star at 99.999% the speed of light. This material is then forced through the gas that surrounds the star, causing a shock that creates the gamma-ray burst itself. For the first time, scientists have observed extremely energetic gamma rays from this particular burst.

Several ground- and space-based observatories have set out to study GRB 190114C. European astronomers were provided observing time with the NASA/ESA Hubble Space Telescope to observe the gamma-ray burst, to study its environment and find out how this extreme emission is produced[1].

"Hubble's observations suggest that this particular burst was sitting in a very dense environment, right in the middle of a bright galaxy 5 billion light years away," explained one of the lead authors, Andrew Levan of the Institute for Mathematics, Astrophysics & Particle Physics Department of Astrophysics at Radboud University in the Netherlands. "This is really unusual, and suggests that might be why it produced this exceptionally powerful light."

Astronomers used the NASA/ESA Hubble Space Teleescope, together with the European Southern Observatory's Very Large Telescope and the Atacama Large Milimeter/submilimeter Array to study the host galaxy of this GRB. Hubble's Wide Field Camera 3 was instrumental in studying whether the environmental properties of the host system, which is composed of a close pair of interacting galaxies, might have contributed to the production of these very-high-energy photons. The GRB occurred within the nuclear region of a massive galaxy, a location that is rather unique. This is indicative of a denser environment than that in which GRBs are typically observed and could have been crucial for the generation of the very-high-energy photons that were observed.

"Scientists have been trying to observe very-high-energy emission from gamma-ray bursts for a long time," explained lead author Antonio de Ugarte Postigo of the Instituto de Astrofísica de Andalucía in Spain. "This new observation is a vital step forward in our understanding of gamma-ray bursts, their immediate surroundings, and just how matter behaves when it is moving at 99.999% of the speed of light."