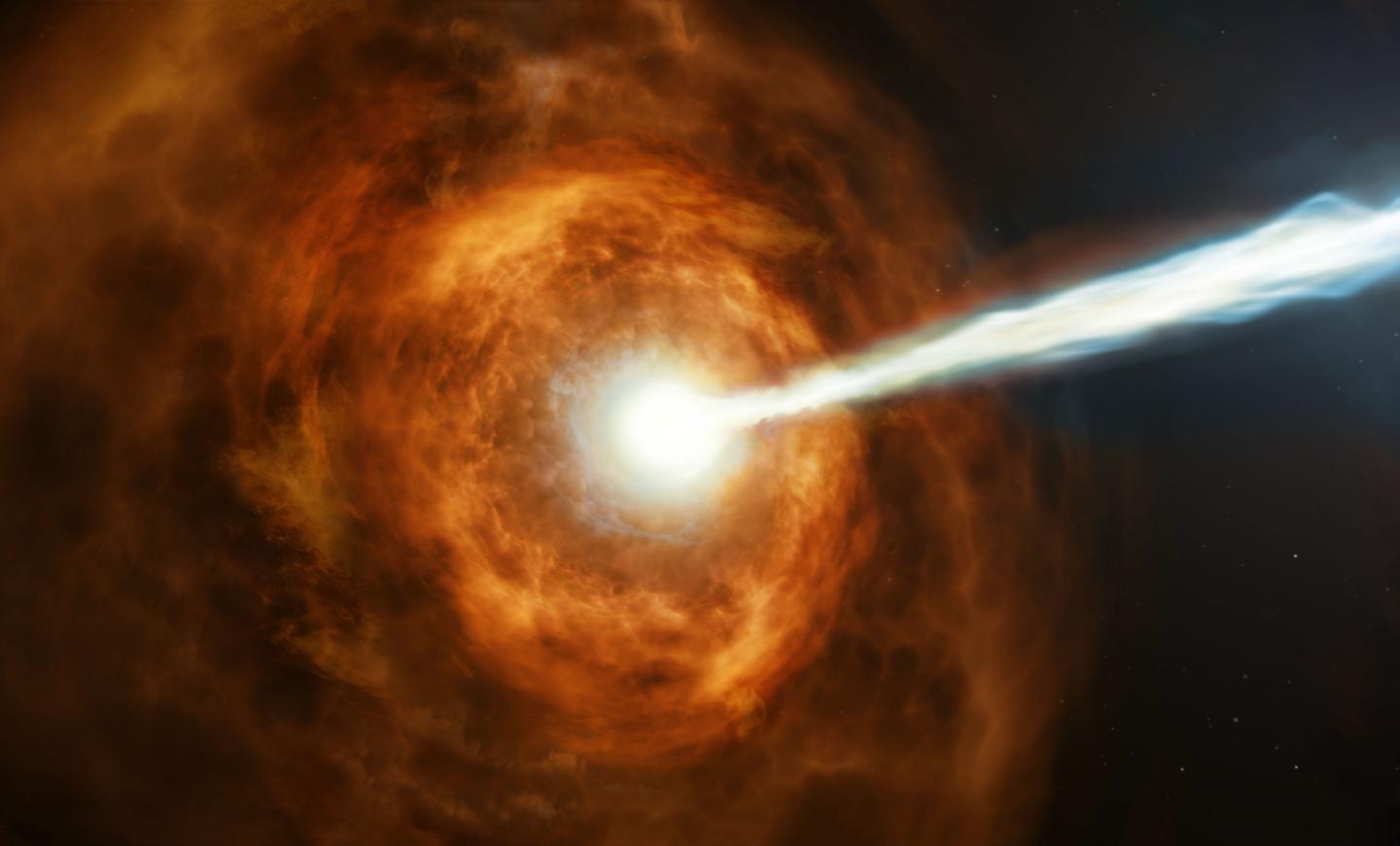 IMAGE: New observations from NASA's Hubble Space Telescope have investigated the nature of the powerful gamma-ray burst GRB 190114C by studying its environment. Shown in this illustration, gamma-ray bursts are the...

NASA's Hubble Space Telescope has given astronomers a peek at the location of the most energetic outburst ever seen in the universe -- a blast of gamma-rays a trillion times more powerful than visible light. That's because in a few seconds the gamma-ray burst (GRB) emitted more energy than the Sun will provide over its entire 10-billion year life.

In January 2019, an extremely bright and long-duration GRB was detected by a suite of telescopes, including NASA's Swift and Fermi telescopes, as well as by the Major Atmospheric Gamma Imaging Cherenkov (MAGIC) telescopes on the Canary islands. Follow-up observations were made with Hubble to study the environment around the GRB and find out how this extreme emission is produced.

"Hubble's observations suggest that this particular burst was sitting in a very dense environment, right in the middle of a bright galaxy 5 billion light years away. This is really unusual, and suggests that this concentrated location might be why it produced this exceptionally powerful light," explained one of the lead authors, Andrew Levan of the Institute for Mathematics, Astrophysics and Particle Physics Department of Astrophysics at Radboud University in the Netherlands.

"Scientists have been trying to observe very high energy emission from gamma-ray bursts for a long time," explained lead author Antonio de Ugarte Postigo of the Instituto de Astrofísica de Andalucía in Spain. "This new Hubble observation of accompanying lower-energy radiation from the region is a vital step in our understanding of gamma-ray bursts [and] their immediate surroundings."

The complementary Hubble observations reveal that the GRB occurred within the central region of a massive galaxy. Researchers say that this is a denser environment than typically observed (for GRBs) and could have been crucial for the generation of the very-high-energy radiation that was observed. The host galaxy of the GRB is actually one of a pair of colliding galaxies. The galaxy interactions may have contributed to spawning the outburst.

Known as GRB 190114C, some of the radiation detected from the object had the highest energy ever observed. Scientists have been trying to observe such very high energy emission from GRBs for a long time, so this detection is considered a milestone in high-energy astrophysics, say researchers.

Previous observations revealed that to achieve this energy, material must be emitted from a collapsing star at 99.999% the speed of light. This material is then forced through the gas that surrounds the star, causing a shock that creates the gamma-ray burst itself.