Hubble captures giant star on the edge of destruction 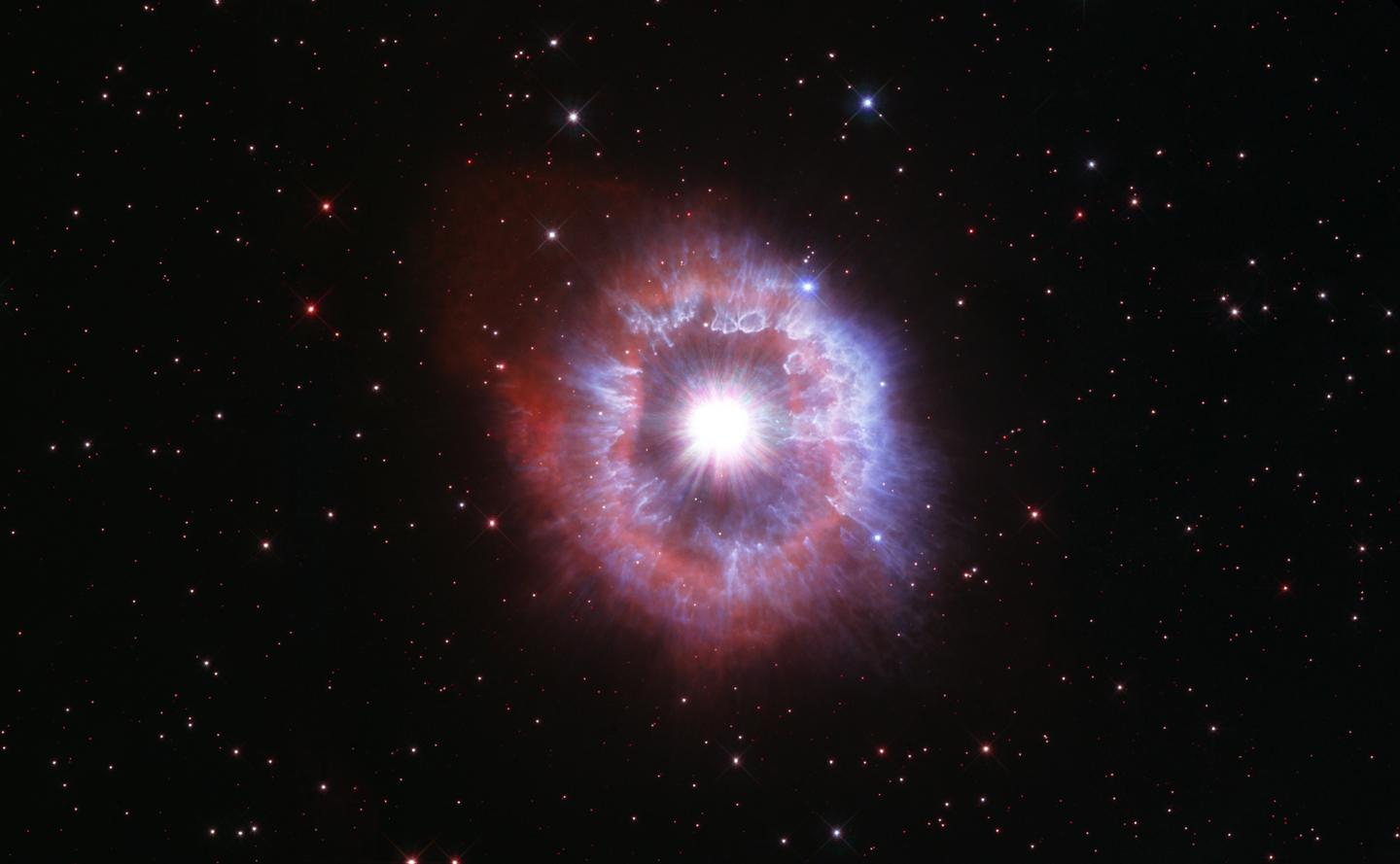 IMAGE: In celebration of the 31st anniversary of the launching of NASA's Hubble Space Telescope, astronomers aimed the renowned observatory at a brilliant "celebrity star, " one of the brightest stars seen...

In celebration of the 31st anniversary of the launching of NASA's Hubble Space Telescope, astronomers aimed the renowned observatory at a brilliant "celebrity star," one of the brightest stars seen in our galaxy, surrounded by a glowing halo of gas and dust.

The price for the monster star's opulence is "living on the edge." The star, called AG Carinae, is waging a tug-of-war between gravity and radiation to avoid self-destruction.

The expanding shell of gas and dust that surrounds the star is about five light-years wide, which equals the distance from here to the nearest star beyond the Sun, Proxima Centauri.

The huge structure was created from one or more giant eruptions about 10,000 years ago. The star's outer layers were blown into space - like a boiling teapot popping off its lid. The expelled material amounts to roughly 10 times our Sun's mass.

These outbursts are the typical life of a rare breed of star called a luminous blue variable, a brief convulsive phase in the short life of an ultra-bright, glamorous star that lives fast and dies young. These stars are among the most massive and brightest stars known. They live for only a few million years, compared to the roughly 10-billion-year lifetime of our Sun. AG Carinae is a few million years old and resides 20,000 light-years away inside our Milky Way galaxy.

Luminous blue variables exhibit a dual personality: They appear to spend years in quiescent bliss and then they erupt in a petulant outburst. These behemoths are stars in the extreme, far different from normal stars like our Sun. In fact, AG Carinae is estimated to be up to 70 times more massive than our Sun and shines with the blinding brilliance of one million suns.

"I like studying these kinds of stars because I am fascinated by their instability. They are doing something weird," said Kerstin Weis, a luminous blue variable expert at Ruhr University in Bochum, Germany.

It's an arm-wrestling contest between radiation pressure from within the star pushing outward and gravity pressing inward. This cosmic match results in the star expanding and contracting. The outward pressure occasionally wins the battle, and the star expands to such an immense size that it blows off its outer layers, like a volcano erupting. But this outburst only happens when the star is on the verge of coming apart. After the star ejects the material, it contracts to its normal size, settles back down, and becomes quiescent for a while.

Like many other luminous blue variables, AG Carinae remains unstable. It has experienced lesser outbursts that have not been as powerful as the one that created the present nebula.

Although AG Carinae is quiescent now, as a super-hot star it continues pouring out searing radiation and powerful stellar wind (streams of charged particles). This outflow continues shaping the ancient nebula, sculpting intricate structures as outflowing gas slams into the slower-moving outer nebula. The wind is traveling at up to 670,000 miles per hour (one million km/hr), about 10 times faster than the expanding nebula. Over time, the hot wind catches up with the cooler expelled material, plows into it, and pushes it farther away from the star. This "snowplow" effect has cleared a cavity around the star.

The red material is glowing hydrogen gas laced with nitrogen gas. The diffuse red material at upper left pinpoints where the wind has broken through a tenuous region of material and swept it into space.

The image was taken in visible and ultraviolet light. Ultraviolet light offers a slightly clearer view of the filamentary dust structures that extend all the way down toward the star. Hubble is ideally suited for ultraviolet-light observations because this wavelength range can only be viewed from space.

Massive stars, like AG Carinae, are important to astronomers because of their far-reaching effects on their environment. The largest program in Hubble's history - the Ultraviolet Legacy Library of Young Stars as Essential Standards - is studying the ultraviolet light of young stars and the way they shape their surroundings.

Luminous blue variable stars are rare: Less than 50 are known among the galaxies in our local group of neighboring galaxies. These stars spend tens of thousands of years in this phase, a blink of an eye in cosmic time. Many are expected to end their lives in titanic supernova blasts, which enrich the universe with heavier elements beyond iron.