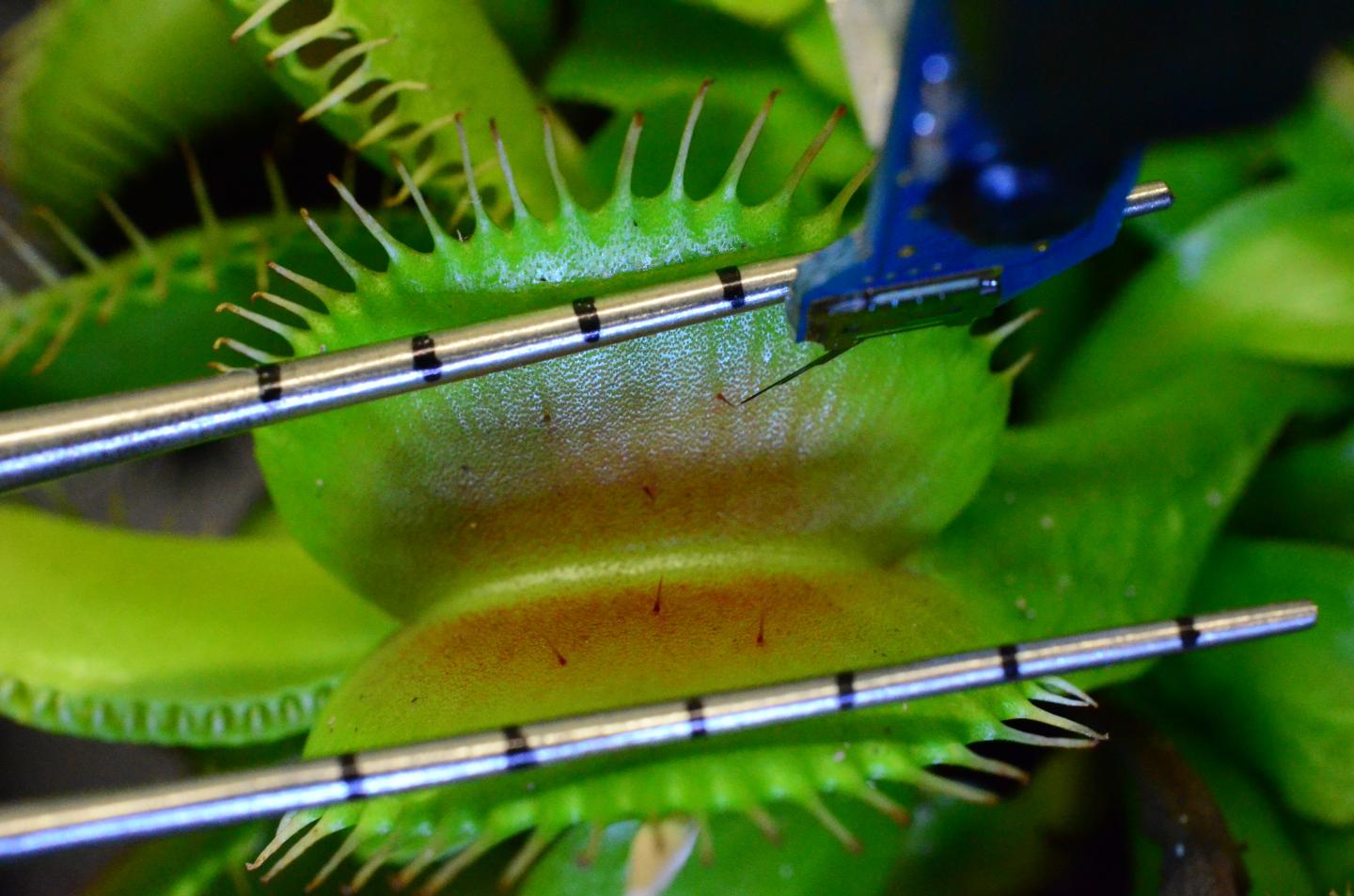 IMAGE: The force sensor of the microrobotic system deflects a sensory hair of a fllytrap that is kept open by the sensors of the load cell.

Venus flytraps catch spiders and insects by snapping their trap leaves. This mechanism is activated when unsuspecting prey touch highly sensitive trigger hairs twice within 30 seconds. A study led by researchers at the University of Zurich has now shown that a single slow touch also triggers trap closure - probably to catch slow-moving larvae and snails.

The Venus flytrap (Dionaea muscipula) is perhaps the most well-known carnivorous plant. It catches its prey, mostly spiders and insects, using a sophisticated trapping mechanism. Its distinct leaves have three highly sensitive trigger hairs on each lobe. These hairs react to even the slightest touches - e.g. when a fly crawls along the leaf - by sending out an electrical signal, which quickly spreads across the entire leaf. If two signals are triggered in a short time, the trap snaps within milliseconds.

The physiological reactions on which this trapping mechanism is based have been studied for over 200 years. The consensus has been that every sufficiently strong touch of a trigger hair causes an electrical signal, and that two signals within 30 seconds result in the closing of the trap. A new study from the University of Zurich (UZH) and ETH Zurich has now found another triggering mechanism. "Contrary to popular belief, slowly touching a trigger hair only once can also cause two signals and thus lead to the snapping of the trap," says co-last author Ueli Grossniklaus, director of the Department of Plant and Microbial Biology at UZH.

First, the interdisciplinary team of researchers determined the forces needed to trigger the plant's trapping mechanism. They did this by using highly sensitive sensors and high-precision microrobotic systems developed by the team of co-last author Bradley J. Nelson at the Institute of Robotics and Intelligent Systems at ETH Zurich. This enabled the scientists to deflect the trigger hairs to a precise angle at a pre-defined speed in order to measure the relevant forces. These experiments confirmed the previous theory. If the chosen parameters approximate the touch of regular prey, it takes two touches for the trap to snap.

From the collected data, the researchers at the ETH Institute for Building Materials developed a mathematical model to determine the range of angular deflection and velocity thresholds that activate the snapping mechanism. "Interestingly, the model showed that at slower angular velocities one touch resulted in two electrical signals, such that the trap ought to snap," says Grossniklaus. The researchers were subsequently able to confirm the model's prediction in experiments.

When open, the lobes of the Venus flytrap's leaves are bent outwards and under strain - like a taut spring. The trigger signal leads to a minute change in the leaves' curvature, which makes the trap snap instantaneously. The electrical signals are generated by ion channels in the cell membrane, which transport atoms out of and into the cell. "We think that the ion channels stay open for as long as the membrane is mechanically stretched. If the deflection occurs slowly, the flow of ions is enough to trigger several signals, which causes the trap to close," explains co-first author Hannes Vogler, plant biologist at UZH. The newly discovered triggering mechanism could be a way for the Venus flytrap to catch slow-moving prey, such as larvae or snails.