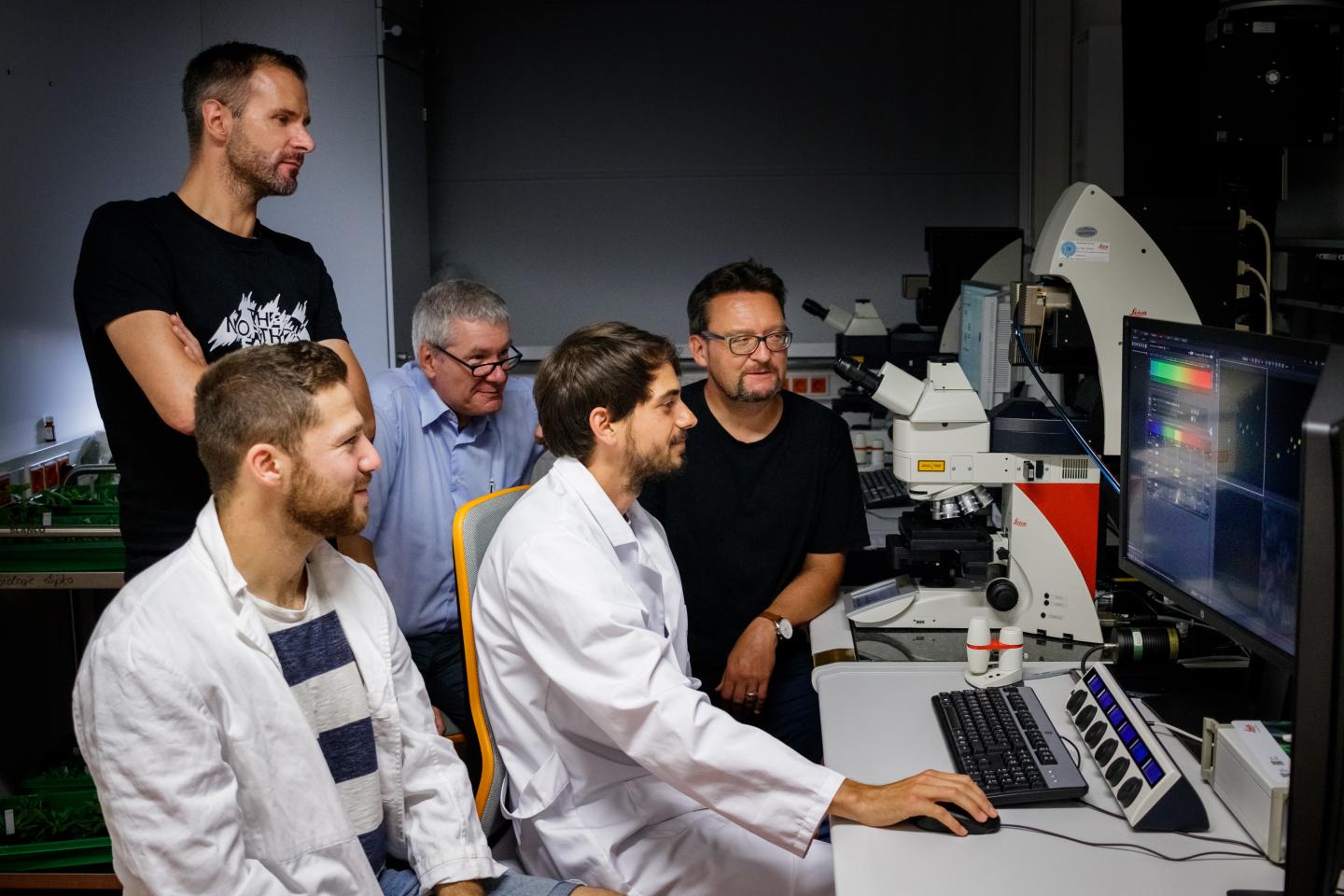 IMAGE: Daniel Lüdke shows his colleagues the results of the microscopic examination.

The pain-relieving effect of salicylic acid, now sold as Aspirin, has been known for thousands of years. Besides being a useful drug with numerous health applications, it is a stress hormone made by plants which is essential in enabling them to fight off damaging pathogens. What was not known, however, is how plants generated this hormone. Now, an international research team led by the University of Göttingen with the University of British Columbia in Vancouver have at last unravelled the biosynthesis of this crucial hormone. Their results were published in Science.

As far back as Neanderthal times, bark containing salicylic acid was chewed to self-medicate; the first chemical extraction was in the 1820s, and an improved version has been marketed as Aspirin for over 120 years. But no-one understood how plants actually made it. Then, 20 years ago researchers using the plant Arabidopsis thaliana discovered the first gene involved in salicylic acid synthesis. Ever since, countless groups have tried to identify the missing steps on the way to salicylic acid.

Dmitrij Rekhter and colleagues from the Department of Plant Biochemistry at the University of Göttingen found a way to investigate. They used special Arabidopsis plants isolated by Professor Zhang's team at the University of British Columbia, which have extremely elevated levels of salicylic acid. Then the researchers found that the precursor to salicylic acid accumulates in these plants if a gene of previously unknown function (PBS3) is removed. The team in Göttingen was therefore able to deduce the action of the gene product.

As first author Rekhter explains, "PBS3 attaches isochorismic acid to glutamic acid resulting in the formation of the previously unknown compound isochorismate-9-glutamate. This highly unstable substance decomposes spontaneously into salicylic acid and by-product." Solving the riddle of how plants biosynthesise salicylic acid was a joint effort of the teams of Professor Ivo Feußner, Dr Marcel Wiermer and Professor Volker Lipka at the University of Göttingen together with the team of Professor Yuelin Zhang at the University of British Columbia in Vancouver, within the International Research Training Group "PRoTECT".

Furthermore, it looks like this pathway applies across the plant kingdom. Feußner from the Department of Plant Biochemistry at the University of Göttingen says, "This research not only increases our understanding of how plants synthesise this hormone, but also opens up new opportunities to breed crops that are more resistant to disease. The important role of salicylic acid for plants in their battle against disease make these findings of fundamental importance for research areas such as plant immunity and therefore also food production."