How an infectious tumor in Tasmanian devils evolved as it spread 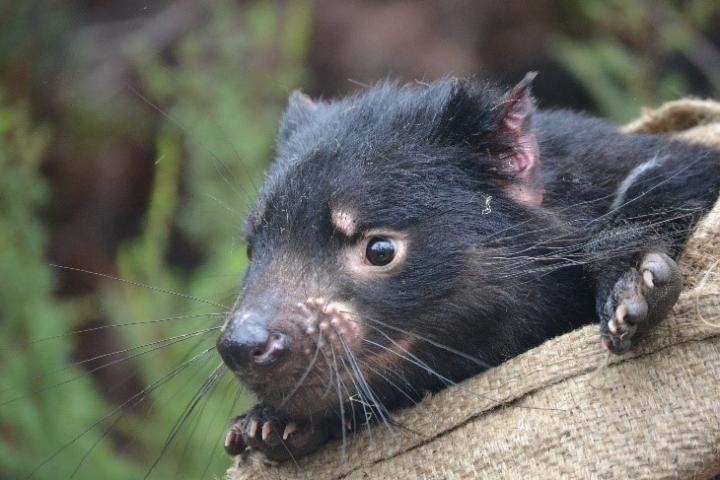 A transmissible cancer in the Tasmanian devil has evolved over the past two decades, with some lineages spreading and replacing others, according to a new study in the open access journal PLOS Biology by Young Mi Kwon, Kevin Gori, and Elizabeth Murchison of the University of Cambridge (UK) and colleagues. The evolutionary dynamics of the cancer help explain how this Australian marsupial has become so quickly endangered, and may shed light on the evolution of other forms of cancer.

The Tasmanian devil is a carnivorous marsupial, about the size of a small dog, that is found only in Tasmania, an island state off the southern coast of eastern Australia. Devil facial tumor 1 (DFT1) was first observed in the mid-1990s, and has since spread to devils across much of the island, transmitted from one animal to another through biting, a common social behavior. Remarkably, tumor cells transferred in this way, rather than being eliminated by the new host's immune system, survive and establish a new tumor. Infection is usually fatal.

To understand more about the spread of the disease, the authors analyzed the genomes of 648 DFT1 tumors collected between 2003 and 2018. They found that early on in the spread of the tumor, DFT1 split into five clades, or sublineages. Two of these died out, while three continued to spread. One, clade A, split yet again. The authors mapped the distribution of each clade, which revealed how diseased devils have spread the cancer through the environment; their findings support those from epidemiological research and highlight the importance of geography in influencing the movements of devils and their disease.

Effects of human attempts to prevent spread were also reflected in the data--a pilot program to remove infected animals was likely responsible for a series of sublineage replacements in one isolated region. The authors also identified multiple types of genomic instability in the DFT1 genome, including the duplication and loss of genes and the gain or loss of whole chromosomes; they additionally described the frequency of whole-genome duplication leading to tetraploid tumors. Nonetheless, the degree of genomic diversity within the devil tumor population was small compared to that often found even within a single human tumor, the authors noted.

Largely as a result of the spread of DFT1, and now exacerbated by the emergence of a second transmissible cancer, DFT2, the Tasmanian devil population has dropped precipitously, and the species is now endangered. "The results from this study may be useful for epidemiological modelling and prediction of management intervention benefit," Murchison said.