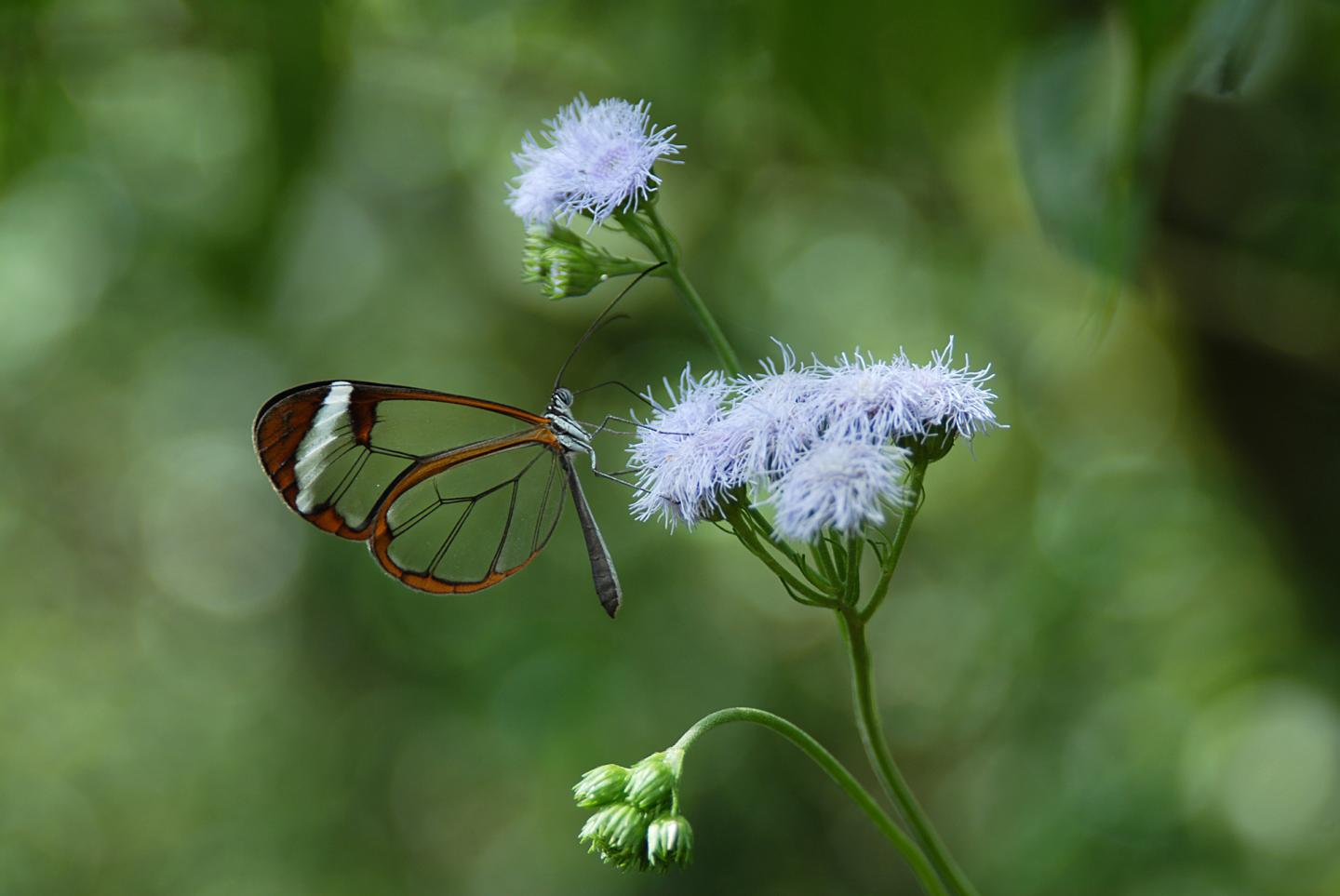 IMAGE: A glasswing butterfly feeding at flowers in Costa Rica. The remarkable transparency of these butterflies allows them to be "invisible ", and the antiglare coating of their wings helps to...

WOODS HOLE, Mass. -- Many animals have evolved camouflage tactics for self-defense, but some butterflies and moths have taken it even further: They've developed transparent wings, making them almost invisible to predators.

A team led by Marine Biological Laboratory (MBL) scientists studied the development of one such species, the glasswing butterfly, Greta oto, to see through the secrets of this natural stealth technology. Their work was published in the Journal of Experimental Biology.

Although transparent structures in animals are well established, they appear far more often in aquatic organisms. "It's an interesting biological question because there just aren't that many transparent organisms on land," notes lead author Aaron Pomerantz, a PhD candidate in Integrative Biology at the University of California, Berkeley. "So we asked the question, what is the actual developmental basis of how they create their transparent wings?"

Butterfly wings are known for their colorful patterns, created by tiny, overlapping, chitinous scales that reflect or absorb various wavelengths of light to produce colors. Pomerantz says that although scale coloration has been intensively studied, investigating the developmental origins of transparency in land-based butterflies hadn't been done before. "Transparency is sort of the opposite of color," he says.

Pomerantz and his co-authors, including his PhD advisor and MBL Director Nipam Patel, were inspired by the work of students in MBL's Embryology course, in which Patel teaches. "I decided to bring some of the transparent butterfly and moth species I had in my collection, which I never really looked at in detail, to the course and present it as a challenge for the students to look at how these wings were transparent," Patel says. "A group of students took that on by imaging the wings with various microscopes. And they realized that pretty much any way you could think to make the wing transparent, some butterfly or moth had figured out how to do it. That's what got us looking in more detail at the development of transparency."

Building on that work, the researchers used confocal and scanning electron microscopy to construct a developmental time scale of how transparency emerges in Greta oto, from the pupal stage to adulthood. They found that the glasswing butterfly's wings develop differently than opaque species, with a lower density of precursor scale cells in the areas that will later develop as transparent. At a very early stage, scale growth and morphologies differed, with thin, bristle-like scales developing in transparent regions and flat, round scale morphologies within opaque regions.

"What Greta oto does is to make fewer scales and to make them in these very different, bristle-like shapes," Patel explains. "But getting the scales out of the way is only part of the problem of creating transparency. Aaron also made a series of observations about nanostructures on the wing that prevent glare in bright sunlight. When light hits these little arrays of nanostructures, it doesn't reflect off -- it goes straight through. So that gives much better transparency," he says.

"As humans, we think we're so brilliant because we figured out how to put anti-glare coating on glass, but butterflies basically figured that out tens of millions of years ago," Patel says.

Unusual wing scales and nanostructures are only part of the story. A second layer of waxy hydrocarbon nanopillars lies atop the wing surface, providing further anti-reflective properties. The researchers examined the reflectivity of the wings before and after removing the waxy layer with hexane.

"We measured the amount of light that reflected off the wing," says Pomerantz. "Those experiments demonstrated that that upper layer was very important for helping to reduce that glare." Biochemical analysis showed that the waxy layer is mostly composed of long chain n-alkanes, similar to those found in other insect species. "They're primarily thought of as something that helps prevent an insect from drying out or desiccating. But in this case, it seems like they're used for these anti-glare properties as well."

Future research directions may include delving more deeply into the how these transparent structures evolved. Pomerantz points out that "if we can learn more about how nature creates new types of nanostructures, that can be very informative for human applications." The work is making the secrets of natural transparency considerably less opaque.