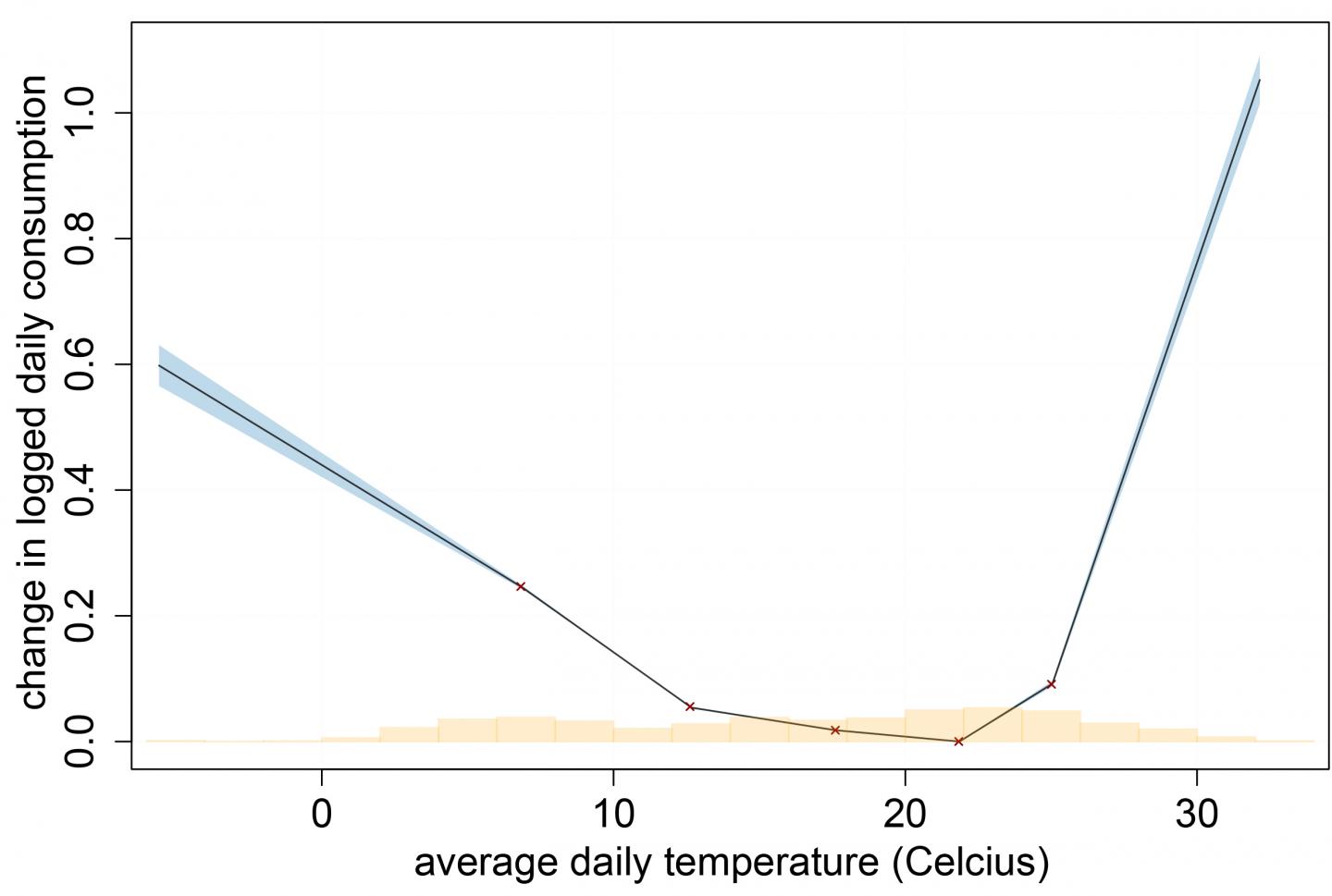 IMAGE: A chart from the paper shows how residential electrical use sharply spikes upward once the temperature reaches about 23 Celcius (73 Fahrenheit).

DURHAM, N.C. -- A new study from Duke University and Fudan University in China is the first to estimate how much Chinese residential electricity consumption would increase due to climate change. It's a lot.

By the end of the 21st century, each degree Celsius increase in global mean surface temperature (GMST) would raise average Chinese residential electricity use by about 9 percent.

Peak electricity use will rise 36 percent for every increased degree Celsius.

By 2099, scientists estimate mean surface temperature will be 2-5 C hotter than today. If consumption patterns remained similar to today, average residential electricity demand in China would rise by 18 percent at the low end and as much as 55 percent at the high end. Peak usage would rise by a minimum of 72 percent.

This finding has important implications for energy grid planning, but even without climate change, average household electricity consumption in China is projected to double by 2040 due to rising incomes.

The study, "Climate Change and Residential Electricity Consumption in the Yangtze River Delta, China," by Yating Li, William A. Pizer, and Libo Wu, appears the week of December 24 in the Proceedings of the National Academy of Sciences.

"Our findings contribute solid evidence supporting China's low-carbon policy by showing how important increasing demand from the residential sector will be," said Libo Wu, a professor and director of the Center for Energy Economics and Strategies Studies at Fudan.

To examine how customers responded to daily temperature changes, the authors analyzed data from more than 800,000 residential customers in the Pudong district of Shanghai between 2014 and 2016. They combined these data on consumer behavior with a variety of detailed climate model simulations to construct the relationship between projected mean global temperature change at the end of the century and localized projected impacts in China.

"This state-of-the-art approach has been applied to communities in the United States, but this is the first application in China," said Billy Pizer, a professor in Duke's Sanford School of Public Policy and Duke Kunshan University in Jiangsu Province, China. Most previous studies of these impacts have been done in Western countries.

Although residential usage accounts for just one-fourth of total electricity consumption in Shanghai, researchers focused on homes because they are very responsive to temperature fluctuations. During extreme heat days (around August 1) and extreme cold days (around February 1), home usage increases more dramatically in response to temperatures than commercial or industrial usage, and drives peak consumption during these times.

In the comfortable range between 13 C and 25 C (55 to 77 F), temperature change did not trigger residents to adjust their thermostats. When temperatures dipped below 13 C, electricity use increased with each 1 C drop, but more moderately.

The study found that high-income Chinese used more electricity during the winter. However, the response to hot summer days was similar for all income groups in Shanghai -- everyone reached for the air conditioning.

"If we consider that more provinces would become 'Shanghai' as incomes rise, our results may ultimately be more broadly applicable," said Yating Li, a Duke PhD candidate in environmental policy.

The authors believe the results can be applied to other urban areas in the Yangtze River Delta, which have similar climate and economic conditions. This metropolitan region includes Jiangsu, Zhejiang and Anhui provinces, roughly one-fifth of China's urban population and one-fourth of economic output of China (GDP).