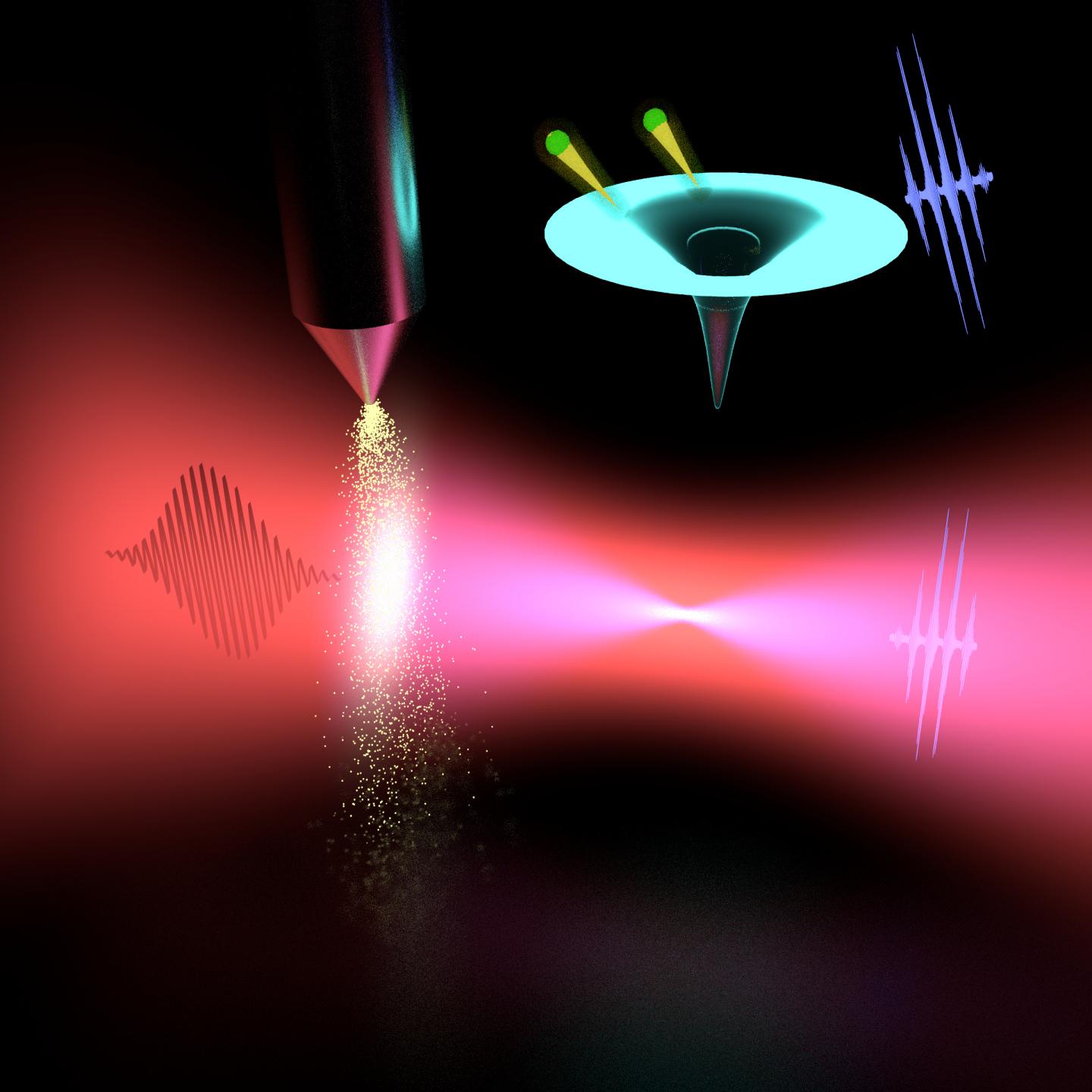 image: An NIR pulse (red) is focused, and high harmonics are generated in a gas jet that is placed before or behind the NIR focus. In this way, the generated XUV light has a size and a divergence that is similar to that of the NIR beam. Due to the shorter wavelength, the focus of the XUV beam is then much smaller than the focus of the NIR beam. This allows the generation of intense XUV pulses which are used for XUV multi-photon ionization of atoms (see upper part).

The invention of the laser has opened the era of nonlinear optics, which today plays an important role in many scientific, industrial and medical applications. These applications all benefit from the availability of compact lasers in the visible range of the electromagnetic spectrum. The situation is different at XUV wavelengths, where very large facilities (so called free-electron lasers) have been built to generate intense XUV pulses. One example of these is FLASH in Hamburg that extends over several hundred meters. Smaller intense XUV sources based on HHG have also been developed. However, these sources still have a footprint of tens of meters, and have so far only been demonstrated at a few universities and research institutes worldwide.

A team of researchers from the Max Born Institute (Berlin, Germany), ELI-ALPS (Szeged, Hungary) and INCDTIM (Cluj-Napoca, Romania) has recently developed a new scheme for the generation of intense XUV pulses. Their concept is based on HHG, which relies on focusing a near-infrared (NIR) laser pulse into a gas target. As a result, very short light bursts with frequencies that are harmonics of the NIR driving laser are emitted, which thereby are typically in the XUV region. To be able to obtain intense XUV pulses, it is important to generate as much XUV light as possible. This is typically achieved by generating a very large focus of the NIR driving laser, which requires a large laboratory.

Scientists from the Max Born Institute have demonstrated that it is possible to shrink an intense XUV laser by using a setup which extends over a length of only two meters. To be able to do so, they used the following trick: Instead of generating XUV light at the focus of the NIR driving laser, they placed a very dense jet of atoms relatively far away from the NIR laser focus, as shown in Fig. 1. This has two important advantages: (1) Since the NIR beam at the position of the jet is large, many XUV photons are generated. (2) The generated XUV beam is large and has a large divergence, and can therefore be focused to a small spot size. The large number of XUV photons in combination with the small XUV spot size makes it possible to generate intense XUV laser pulses. These results were confirmed by computer simulations that were carried out by a team of researchers from ELI-ALPS and INCDTIM.

To demonstrate that the generated XUV pulses are very intense, the scientists studied multi-photon ionization of argon atoms. They were able to multiply ionize these atoms, leading to ion charge states of Ar2+ and Ar3+. This requires the absorption of at least two and four XUV photons, respectively. In spite of the small footprint of this intense XUV source, the obtained XUV intensity of 2 x 1014 W/cm2 exceeds that of many already existing intense XUV sources.

The new concept can be implemented in many laboratories worldwide, and various areas of research may benefit. This includes attosecond-pump attosecond-probe spectroscopy, which has so far been extremely difficult to do. The new compact intense XUV laser could overcome the stability limitations that exist within this technique, and could be used to observe electron dynamics on extremely short timescales. Another area that is expected to benefit is the imaging of nanoscale objects such as bio-molecules. This could improve the possibilities for making movies in the nano-cosmos on femtosecond or even attosecond timescales.