Hints of a volcanically active exomoon 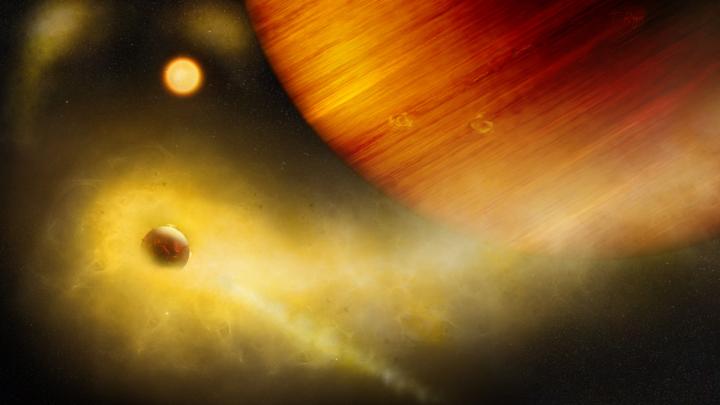 IMAGE: Artist's composition of a volcanic exo-Io undergoing extreme mass loss. The hidden exomoon is enshrouded in an irradiated gas cloud shining in bright orange-yellow, as would be seen with a...

Jupiter's moon Io is the most volcanically active body in our solar system. Today, there are indications that an active moon outside our solar system, an exo-Io, could be hidden at the exoplanet system WASP-49b. "It would be a dangerous volcanic world with a molten surface of lava, a lunar version of close-in Super Earths like 55 Cancri-e" says Apurva Oza, postdoctoral fellow at the Physics Insitute of the University of Bern and associate of the NCCR PlanetS, "a place where Jedis go to die, perilously familiar to Anakin Skywalker." But the object that Oza and his colleagues describe in their work seems to be even more exotic than Star Wars science fiction: the possible exomoon would orbit a hot giant planet, which in turn would race once around its host star in less than three days - a scenario 550 light years away in the inconspicuous constellation of Lepus, underneath the bright Orion constellation.

Astronomers have not yet discovered a rocky moon beyond our solar system and it's on the basis of circumstantial evidence that the researchers in Bern conclude that the exo-Io exists: Sodium gas was detected at the WASP 49-b at an anomalously high-altitude. "The neutral sodium gas is so far away from the planet that it is unlikely to be emitted solely by a planetary wind," says Oza. Observations of Jupiter and Io in our solar system, by the international team, along with mass loss calculations show that an exo-Io could be a very plausible source of sodium at WASP 49-b. "The sodium is right where it should be" says the astrophysicist.

Already in 2006, Bob Johnson of the University of Virginia and the late Patrick Huggins at New York University, USA had shown that large amounts of sodium at an exoplanet could point to a hidden moon or ring of material, and ten years ago, researchers at Virginia calculated that such a compact system of three bodies: star, close-in giant planet and moon, can be stable over billions of years. Apurva Oza was then a student at Virginia, and after his PhD on moons atmospheres in Paris, decided to pick up the theoretical calculations of these researchers. He now publishes the results of his work together with Johnson and colleagues in the Astrophysical Journal.

"The enormous tidal forces in such a system are the key to everything," explains the astrophysicist. The energy released by the tides to the planet and its moon keeps the moon's orbit stable, simultaneously heating it up and making it volcanically active. In their work, the researchers were able to show that a small rocky moon can eject more sodium and potassium into space through this extreme volcanism than a large gas planet, especially at high altitudes. "Sodium and potassium lines are quantum treasures to us astronomers because they are extremely bright," says Oza, "the vintage street lamps that light up our streets with yellow haze, is akin to the gas we are now detecting in the spectra of a dozen exoplanets."

"We need to find more clues"

The researchers compared their calculations with these observations and found five candidate systems where a hidden exomoon can survive against destructive thermal evaporation. For WASP 49-b the observed data can be best explained by the existence of an exo-Io. However, there are other options. For example, the exoplanet could be surrounded by a ring of ionized gas, or non-thermal processes. "We need to find more clues," Oza admits. The researchers are therefore relying on further observations with ground-based and space-based instruments.

"While the current wave of research is going towards habitability and biosignatures, our signature is a signature of destruction", says the astrophysicist. A few of these worlds could be destroyed in a few billion years due to the extreme mass loss. "The exciting part is that we can monitor these destructive processes in real time, like fireworks", says Oza.