Heightened interaction between neolithic migrants and hunter-gatherers in Western Europe 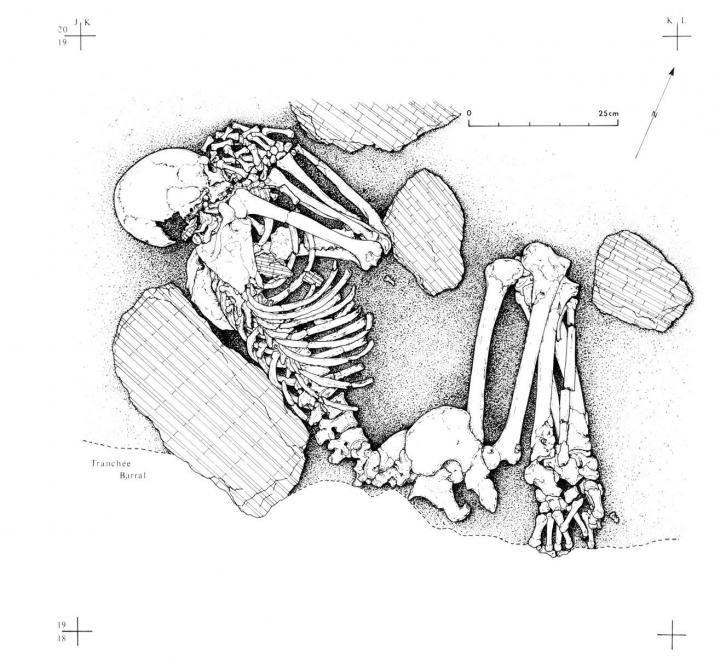 The Neolithic lifestyle, including farming, animal domestication and the development of new technologies, emerged in the Near East around 12,000 years ago and contributed profoundly to the modern way of life. The Neolithic spread rapidly across Europe, mainly along the Danube valley and the Mediterranean coastline, reaching the Atlantic coast around 5000-4500 BCE. The existing archaeogenetic data from prehistoric European farmers indicates that the spread of farming is due to expanding populations of early farmers who mixed little, if at all, with indigenous hunter-gatherer groups. However, until now, no archaeogenetic data were available for France.

"France is where the two streams of the Neolithic expansion overlapped, so understanding how these groups interacted would fill in a big piece of the puzzle," says Wolfgang Haak, senior author of the study. "The data we're collecting suggests a more complex scenario than elsewhere in Europe, with more interaction between early farmers and hunter-gatherers."

These interactions seem to vary greatly from one region to another, attesting to a diverse cultural mosaic in early Neolithic Western Europe. In order to document the biological interactions during this transition period, researchers from the Max Planck Institute for the Science of Human History teamed up with colleagues from the PACEA laboratory (1*) in Bordeaux, the CEPAM laboratory (2*), the RGZM (3*), and other international partners (4*). The study, published in Science Advances, reports new genome-wide data for 101 prehistoric individuals from 12 archaeological sites in today's France and Germany, dating from 7000-3000 BCE

High levels of hunter-gatherer ancestry in early farmers from France

The new results showed evidence for a higher level of admixture, or the combination of genetic information from genetically distant populations, between early migrant farmers and local hunter-gatherers in France. The genetic mixture in this region is unprecedented in the rest of Europe for the early stages of the Neolithic expansion. The genetic contribution of hunter-gatherers is particularly high in the south of France, roughly 31% on average, compared with 3% in Central Europe or 13% in the Iberian Peninsula.

Intriguingly, in an individual from the Pendimoun site in Provence (5480-5360 BCE), the genetic contribution of local hunter-gatherers was as high as 55%. The team could show that the admixture in this individual occurred recently, about four generations before, shortly after the first Neolithic farmers settled on that part of the French coast. "These findings suggest continuous contacts between both groups for at least a century," says Maïté Rivollat, postdoc in the INTERACT project and lead author of the study.

Genetic evidence for the two routes of the Neolithic expansion

Leveraging the genetic substructure observed in European hunter-gatherers, the team was able to retrace the dynamics of admixture in various European regions. Neolithic farmers in central Europe carry a very small hunter-gatherer component, which had already been mixed in and brought in from southeastern Europe. This accounts for the rapid spread of Neolithic groups with a negligible amount of interaction with local hunter-gatherers. On the other hand, Neolithic farmers from west of the Rhine river (in France, Spain, Great Britain) carry a genetic component inherited from local Mesolithic groups, implying a process of late and local admixture.

The new data highlight the complexity and regional variability of biological and cultural interactions between farmer and hunter-gatherer communities during the Neolithic expansion. "This study shows that we can add a lot more detail with focused sampling and unravel the regional dynamics of the farmer-forager interactions," concludes Rivollat. "With the increasing amount of genetic data, we gain the much-needed resolution to investigate biological processes in the past and to understand their relations with observed cultural phenomena."

Credit:
Max Planck Institute for the Science of Human History
May 29, 2020