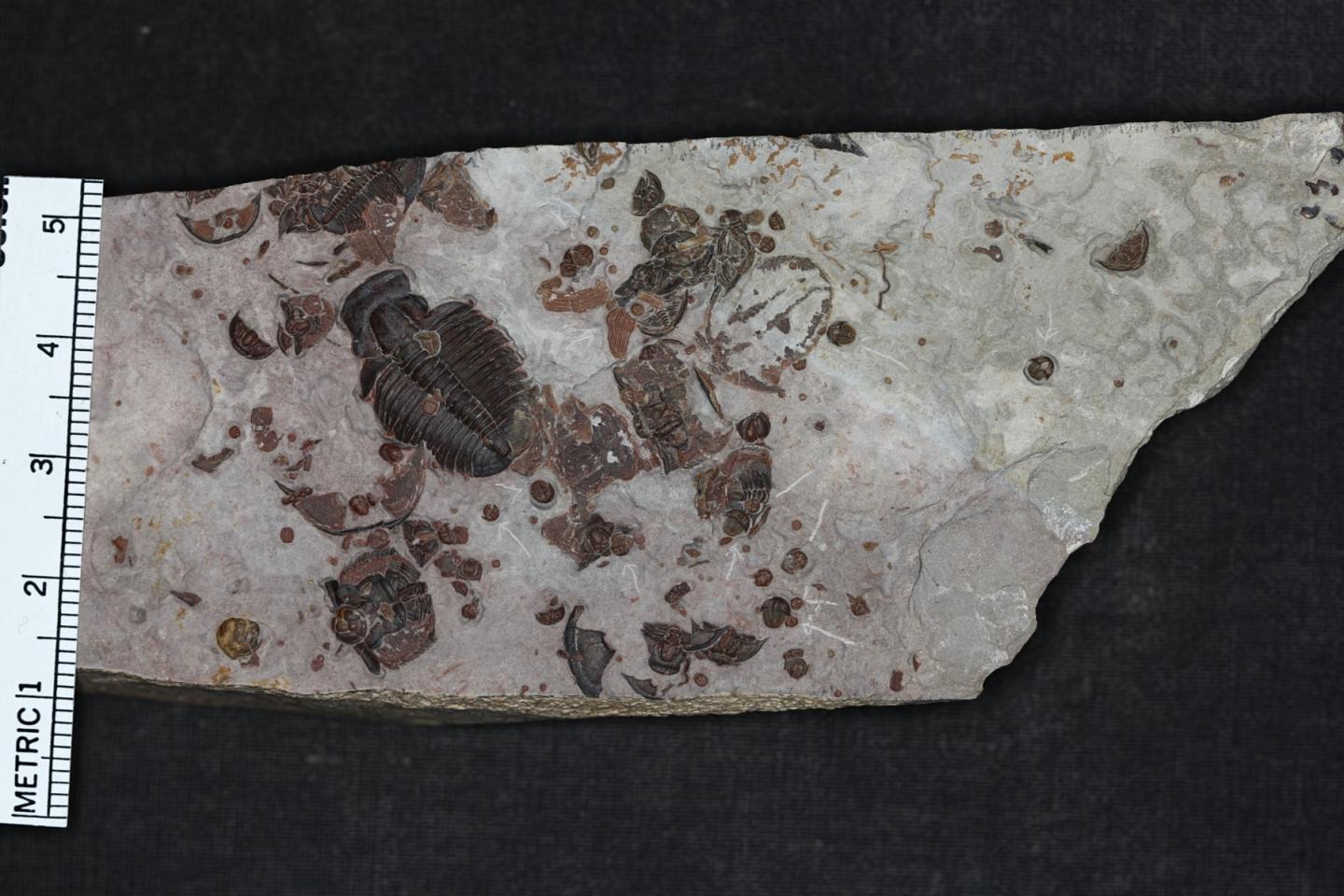 IMAGE: A slab with multiple species of trilobite fossils embedded. Scale is in centimeters.

If you've ever held a trilobite fossil, seen one in a classroom, or walked by one in a store, chances are it was Elrathia kingii, one of the most common and well-recognized trilobites, and collected by the hundreds of thousands in western Utah. But despite the popularity of this species, scientists had not determined how it grew--from hatchling to juvenile to adult--until now. New work from the American Museum of Natural History published today in the journal Papers in Palaeontology describes the development and growth rate of Elrathia kingii--only the second such dataset to be compiled for a trilobite--allowing for the first comparison among trilobite species.

"There's quite a big size range among trilobites. Some never got bigger than about a centimeter, while the largest on record is 72 centimeters (28 inches)," said Melanie Hopkins, an associate curator in the Museum's Division of Paleontology and the study's author. "Growth-rate studies like this one can help us tackle some of the big-picture questions: How did some trilobites get so big? What was the environmental context for that? And how did body size evolve over the evolutionary history of the clade?"

Trilobites are a group of extinct marine arthropods--distantly related to the horseshoe crab--that lived for almost 300 million years. They were incredibly diverse, with more than 20,000 described species. Their fossilized exoskeletons are preserved in sites all over the world, from the United States to China. Like insects, they molted throughout their lifetimes, leaving clues to how they changed during development. But to calculate the species' growth rate, scientists need fossils representing all stages of the animal's life--and lots of them.

"There are tons of specimens of Elrathia kingii out there but most of them are adults, and data from exactly where they were collected is inconsistent," Hopkins said. "I needed material that I could collect from as small a section as possible that included a lot of juveniles."

So in May 2018, Hopkins spent five days in Utah with a crew consisting of Museum staff and volunteers at a new fossil site said to preserve bucketloads of Elrathia kingii. By the end of the trip, they had collected about 500 specimens--many of them juveniles, which can be as small as half a millimeter long--from a section of outcrop just 1.5 meters (about 5 feet) long.

Hopkins estimated the growth rate and compared it to previously published data on a different trilobite, Aulacopleura konincki--the first time two trilobite species have been compared in this way. The two species look very similar and Hopkins found that they also grow in similar ways: for example, the growth of the trunk--the area immediately below the trilobite's head made up of segments that increase with age--was controlled by a growth gradient, with those that were younger and closer to the back of the body undergoing faster growth. But while Elrathia kingii was smaller in early development and went through fewer molts before adulthood, it had faster growth rates, ultimately reaching sizes on par with Aulacopleura konincki, the largest of which are about 4 centimeters long.

In future studies, Hopkins is planning to add growth-rate data on different, more diverse-looking trilobite species to her models.