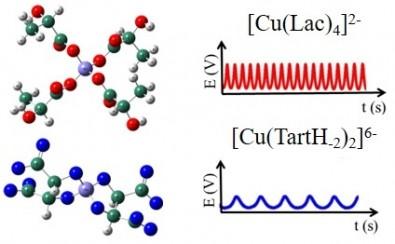 IMAGE: Images of the molecular structure used in the study, with the respective graphs showing the variation in electric potential as a function of time

Entirely novel materials and known materials alike can be produced by means of self-organization in chemical systems. Applications range from sensors and batteries to fuel cells, among other technological possibilities. Achieving a deeper understanding and control of the processes involved is the goal of the Campinas Electrochemistry Group (CampEG), affiliated with the University of Campinas’s Institute of Chemistry (IQ-UNICAMP) in the state of São Paulo, Brazil, and led by Raphael Nagao.

Some results of the research were published in a recent article in The Journal of Physical Chemistry (JPC). A review of the group’s work as a whole is featured on the cover of ChemElectroChem.

FAPESP supports the group via several grants, especially a Young Investigator Grant to Nagao for the project “Design and control of self-organized electrochemical patterns”.

“In a reactor with electrodes, the electrochemical process in itself creates self-organizing nanometric or micrometric metal structures. The material grows because of oscillations in the electric potential,” Nagao told Agência FAPESP. “Energy conversion is one possible application of the resulting product – for example, as a catalyst of carbon dioxide (CO2) conversion into ethylene (C2H4), which is a more significant molecule in terms of its potential applications.”

A copper solution was used in the experiment reported in the JPC article. “The electrochemical process produced a deposition on the electrode, detected by means of the variation in potential,” Nagao said. “Using two organic ligands to prevent precipitation of the copper, we were able to control two parameters: the electric oscillation amplitude, which can be correlated with the chemical composition of the resulting material, and the oscillation period, which correlates with the thickness of the layer. Advance knowledge of the structure of the ligands therefore enables growth of the deposit to be controlled.”

Nagao added that the group now wants to achieve a detailed understanding of how these processes work from a basic science standpoint. Potential technological applications will be the next step. “Self-organization in chemical systems can be used as a sophisticated molecular construction mechanism. Exploration of catalytic advantages in terms of the selectivity and efficiency of these materials holds considerable promise going forward,” he said.