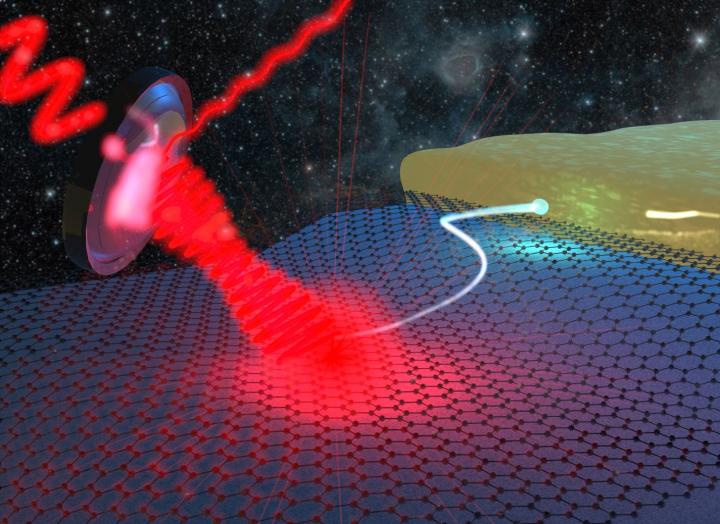 IMAGE: The image depicts a schematic of terahertz (THz) heterodyne detection with graphene. In this, two THz waves (red) are coupled into graphene, where they are combined or mixed. One of...

Researchers from Chalmers University of Technology have demonstrated a detector made from graphene that could revolutionize the sensors used in next-generation space telescopes. The findings were recently published in the scientific journal Nature Astronomy.

Beyond superconductors, there are few materials that can fulfill the requirements needed for making ultra-sensitive and fast terahertz (THz) detectors for astronomy. Chalmers researchers have shown that engineered graphene adds a new material paradigm for THz heterodyne detection.

"Graphene might be the only known material that remains an excellent conductor of electricity/heat even when having, effectively, no electrons. We have reached a near zero-electron scenario in graphene, also called Dirac point, by assembling electron-accepting molecules on its surface. Our results show that graphene is an exceptionally good material for THz heterodyne detection when doped to the Dirac point", says Samuel Lara-Avila, assistant professor at the Quantum Device Physics Laboratory and lead author of the paper.

In detail, the experimental demonstration involves heterodyne detection, in which two signals are combined, or mixed, using graphene. One signal is a high intensity wave at a known THz frequency, generated by a local source (i.e. a local oscillator). The second is a faint THz signal that mimics the waves coming from space. Graphene mixes these signals and then produces an output wave at a much lower gigahertz (GHz) frequency, called the intermediate frequency, that can be analyzed with standard low noise gigahertz electronics. The higher the intermediate frequency can be, the higher bandwidth the detector is said to have, required to accurately identify motions inside the celestial objects.

Sergey Cherednichenko, professor at the Terahertz and Millimetre Wave Laboratory and co-author of the paper, says:

"According to our theoretical model, this graphene THz detector has a potential to reach quantum-limited operation for the important 1-5 THz spectral range. Moreover, the bandwidth can exceed 20 GHz, larger than 5 GHz that the state of the artstate-of-the-art technology has to offer."

Another crucial aspect for the graphene THz detector is the extremely low power needed for the local oscillator to achieve a trustable detection of faint THz signals, few orders of magnitude lower than superconductors require. This could enable quantum-limited THz coherent detector arrays, hence opening the door to 3D imaging of the universe.

Elvire De Beck, astronomer at the Department of Space, Earth and Environment, who did not take part in the research, explains the possible implications for practical astronomy:

"This graphene-based technology has enormous potential for future space missions that aim at e.g. unveiling how water, carbon, oxygen and life itself came to earth. A lightweight, power effective 3D imager that is quantum-limited at terahertz frequencies is crucial for such ambitious tasks. But, at the moment, THz 3D imagers are simply not available".

Sergey Kubatkin, professor at the Quantum Device Physics Laboratory and co-author of the paper, explains:

"The core of the THz detector is the system of graphene and molecular assemblies. This is in itself a novel composite 2D material that deserves deeper investigation from a fundamental point of view, as it displays a whole new regime of charge/heat transport governed by quantum-mechanical effects."