Several times a week, astronomers detect the violent death cry of a massive star -- an extraordinarily energetic release of gamma rays that takes place in just a matter of seconds to minutes, called a gamma-ray burst (GRB). The GRB's ejecta, which is thought to be beamed in narrow jets, slams into interstellar gas at near light speed. This violent collision shocks the material and produces a bright afterglow that can radiate brightly at X-ray and other wavelengths for several days, or even a few weeks. But a GRB observed by NASA's Swift satellite on 29 July 2006 generated an X-ray afterglow that remained detectable to the spacecraft's X-ray Telescope (XRT) for an astonishing 125 days. 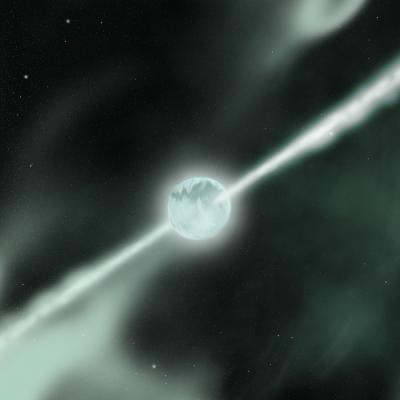 The core of a massive star in a distant galaxy collapses, ending its life -- though there is little effect visible at the surface. Deep inside, twin beams of matter and energy begin to blast their way outward. Within seconds, the beams have eaten their way out of the star, and observers at Earth see it as a gamma-ray burst, GRB 060729A.

Swift's Burst Alert Telescope (BAT) detected the GRB in the constellation Pictor on 29 July 2006. XRT picked up GRB 060729 (named for the date of its first observation) 124 seconds after the BAT detected it. Normally, XRT monitors an afterglow for a week or two until it fades to near invisibility. But GRB 060729's afterglow started off so bright and faded so slowly that XRT could regularly monitor it for months, and the instrument still was able to detect it in late November. The burst's relatively close proximity to Earth, about 5 billion light-years, also was a factor in XRT's ability to monitor the afterglow for such an extended period.

The slow fading of the X-ray afterglow has several important ramifications for our understanding of GRBs. "It requires a larger energy injection than we normally see in bursts, and may require continuous energy input from the central engine," says astronomer Dirk Grupe of Penn State University, in University Park, Pennsylvania, who is lead author of the international team that reports these results in a paper scheduled to appear in the June 20, 2007 issue of the Astrophysical Journal.

One possibility is that the central engine, perhaps an accreting black hole, ejected multiple shells of material at near light speed. "Forward shells may have decelerated when they slammed into interstellar gas, allowing back shells to catch up and slam into them with tremendous force," says paper coauthor Xiang-Yu Wang, a postdoctoral scholar at Penn State. "The resulting shock waves could have powered the afterglow and made it shine brightly in X-rays."

But another possibility is that the GRB's central engine was a magnetar -- a neutron star with an ultra-powerful magnetic field. The magnetar's magnetic field acts like a brake, forcing the star's rotation rate to spin down rapidly. The energy of this spin-down can be converted into magnetic energy that is continuously injected into the initial blast wave that triggered the GRB. Wang's calculations show that this energy could power the observed X-ray afterglow and keep it shining for months.

A burst observed by Swift on 10 January 2007 also suggests that magnetars power some GRBs. GRB 070110's X-ray afterglow remained nearly constant in brightness for 5 hours, then faded rapidly more than tenfold. In a paper submitted to the Astrophysical Journal, an international group led by Eleonora Troja of the INAF--IASF of Palermo, Italy, proposes that a magnetar best explains these observations.

"The refreshed shock model doesn't work well because of the rapid decay," says study co-author and Swift team member Francis Marshall of NASA's Goddard Space Flight Center in Greenbelt, Maryland. In this model, the colliding shells should heat a large area of gas, so the afterglow would fade slowly. But a magnetar could easily power the afterglow for several hours as it rapidly spun down.

"From the properties of the X-ray afterglow, we estimate that the central object should have been rotating with an initial frequency of about 1,000 times per second," says Troja. "That initial frequency is very close to the break-up speed of a spinning neutron star." 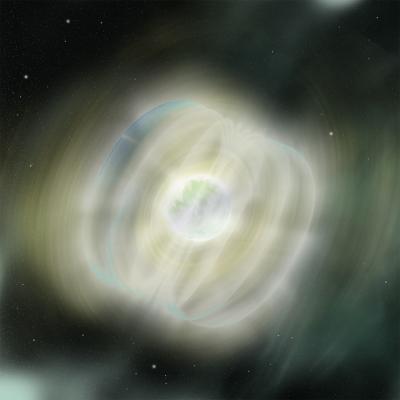 Deep at the heart of this event, the core has shrunk into a fantastically dense magnetar, a neutron star possessing a magnetic field trillions or even quadrillions of times stronger than Earth's. The magnetism is what powers the long glow of X-rays seen by Earthbound scientists.

"People have thought for a long time that GRBs are black holes being born, but scientists are now thinking of other possibilities," says Swift principal investigator Neil Gehrels of NASA Goddard, a co-author on both studies. According to several studies, a relatively weak GRB observed by Swift on 18 February 2006 was also from a stellar death that produced a magnetar. That GRB was linked firmly to an exploding star: Supernova 2006aj.

Another surprising result from GRB 060729 is that the X-ray afterglow displayed no sharp decrease in brightness over the 125-day period that it was detected by XRT. Using widely accepted theory, Grupe and his colleagues conclude that the angle of the GRB's jet must have been at least 28 degrees wide. In contrast, most GRB jets are thought to have very narrow opening angles of only about 5 degrees. "The much wider opening angle seen in GRB 060729 suggests a much larger energy release than we typically see in GRBs," says Grupe.

Astronomers have no direct way to measure jet opening angles, but they can infer the angle by seeing when an afterglow declines in brightness, and making plausible assumptions about the burst and its environment. According to standard theory, afterglows exhibit a rapid decline in brightness as the jet decelerates and interacts with interstellar gas. When the jet slows sufficiently, it begins to expand laterally and the fraction of the jet visible to the observer is no longer increasing, which further accelerates the rate of decay. This interaction is called a jet break.

"We could follow the afterglow for such a long time and did not see any evidence that the jet had changed properties," says Grupe. "No other afterglow allows us to make such a strong statement because they either were not followed for that long, or the coverage of the follow-up observations was only sparse and does not allow us to draw any conclusions."

Gehrels points out that one of the biggest puzzles posed by Swift is the fact that it has rarely seen evidence for jet breaks in X-rays. "GRB 060729 is an extreme example of what we've already been realizing is a problem. It brings into question our whole understanding of jet outflows," he says. "This is a new, hot result. It's pushing this to the limit and forcing people to deal with the problem."

Grupe and his colleagues will use NASA's Chandra X-ray Observatory to observe the 29 July GRB afterglow later this month, and they have applied for time on the European Space Agency's XMM-Newton X-ray observatory to see if they can catch it this summer or autumn. Two GRBs from the pre-Swift era have exhibited longer X-ray afterglows, the bursts of 25 April 1998, and 29 March 2003. But those afterglows were monitored infrequently and were much closer to Earth. If Chandra or XMM-Newton can see the afterglow later this year, GRB 060729 will break the record for longest observed X-ray afterglow.

Written from a news release by Penn State.