Global wildlife surveillance could provide early warning for next pandemic 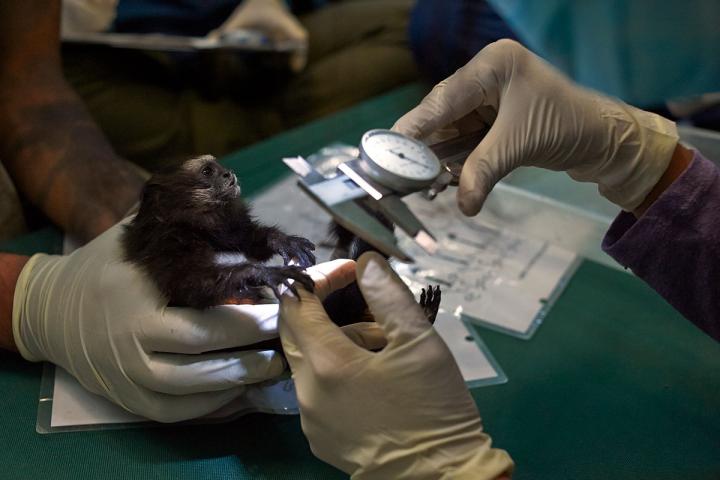 IMAGE: A juvenile saddleback tamarin is measured as part of an annual health check of a population of three primate species in southeastern Peru. In a perspective article published July 9...

The virus that causes COVID-19 probably originated in wild bats that live in caves around Wuhan, China, and may have been passed to a second animal species before infecting people, according to the World Health Organization. Many of the most devastating epidemics of recent decades - including Ebola, avian influenza and HIV/AIDS - were triggered by animal viruses that spilled over into people. Despite the ever-present danger of a new virus emerging and sparking a worldwide pandemic, there is no global system to screen for viruses in wild animals that eventually may jump to humans.

In a perspective article published July 9 in Science, a diverse group of infectious disease experts, ecologists, wildlife biologists and other experts argue that a decentralized global system of wildlife surveillance could - and must ­- be established to identify viruses in wild animals that have the potential to infect and sicken people before another pandemic begins.

"It's impossible to know how often animal viruses spill over into the human population, but coronaviruses alone have caused outbreaks in people three times in the last 20 years," said co-author Jennifer A. Philips, MD, PhD, referring to the SARS, MERS and COVID-19 epidemics. Philips is an associate professor of medicine and co-director of the Division of Infectious Diseases at Washington University School of Medicine in St. Louis. "Even a decade ago it would have been difficult to conduct worldwide surveillance at the human-wildlife interface. But because of technological advances, it is now feasible and affordable, and it has never been more obvious how necessary it is."

Every animal has its own set of viruses, with some overlap across species. Often, an animal species and its viruses have lived together for so long that they've adapted to one another, and the viruses cause either no symptoms or only mild to moderate disease. But when different animal species that don't normally have much contact are brought together, viruses have the opportunity to jump from one species to another. Most viruses don't have the genetic tools to infect another species. But viruses with such tools can be lethal to a newly infected species with no natural immunity.

Human activity is making such spillover events more and more likely. As the population of the world continues to grow, the demand for natural resources skyrockets. People push into wild areas to make space for new homes and businesses, and to access resources to fuel their economies and lifestyles. Wild animals are caught and sold for consumption, or as exotic pets at wildlife markets, where diverse species are jumbled together under crowded and unsanitary conditions. Wild-animal parts are shipped around the world as trinkets or ingredients for traditional or alternative medicines.

And yet there is no international system set up to screen for disease-causing viruses associated with the movement of wildlife or wildlife products.

"In the lead up to this article, I spoke with friends and colleagues around the world who do wildlife research in Madagascar, Indonesia, Peru, Ecuador and asked them, 'Where do you take your samples for screening?'" said co-author Gideon Erkenswick, PhD, a postdoctoral research associate in Philips' lab. Erkenswick is also the director of Field Projects International, a nonprofit organization dedicated to the study and conservation of tropical ecosystems. "In almost every situation, the answer was 'Nowhere.' Locally, there is nobody with dedicated time and resources to do this work. To find new disease-causing viruses, we have to find willing foreign collaborators, then get samples out of the country, which is difficult and expensive."

Philips, Erkenswick, and colleagues in the Wildlife Disease Surveillance Focus Group that authored the Science paper, suggest the establishment of a global surveillance network to screen wild animals and their products at hotspots such as wildlife markets. The idea would be to have local teams of researchers and technicians extract viral genomes from animal samples, rapidly sequence them on site and upload the sequences to a central database in the cloud. The cost and size of the necessary scientific equipment has dropped in recent years, making such screening affordable even in resource-limited settings where most such hotspots are located.

"There's now a genetic sequencer available that is literally the size of a USB stick," Erkenswick said. "You could bring that and a few other supplies into a rainforest and analyze a sample for sequences associated with disease-causing viruses on site in a matter of hours. I mean, if you do chance upon something like the virus that causes COVID-19, do you really want to be collecting it, storing it, transporting it, risking further exposure, sample degradation, and adding months or years of delay, before you figure out what you've got? There are people with the expertise and skills to do this kind of work safely pretty much everywhere in the world, they just haven't been given the tools."

Once viral sequences are uploaded, researchers around the world could help analyze them to identify animal viruses that may be a threat to people and to develop a better understanding of the universe of viruses that thrive in different environments. By comparing genomic sequence data, researchers can identify what family an unknown virus belongs to and how closely it is related to any disease-causing viruses. They can also identify whether a virus carries genes associated with the ability to cause disease in people.

"By knowing the diversity out there, and tracking its evolution, we can ensure that we stay ahead of what's in wildlife populations and at the wildlife-human interface," Philips said. "In the past, before modern transportation, spillover events would have been local and spread slowly, giving people elsewhere time to respond. But now the world is so small that an event in one place puts the whole world at risk. This is not someone else's problem. It's everyone's problem."