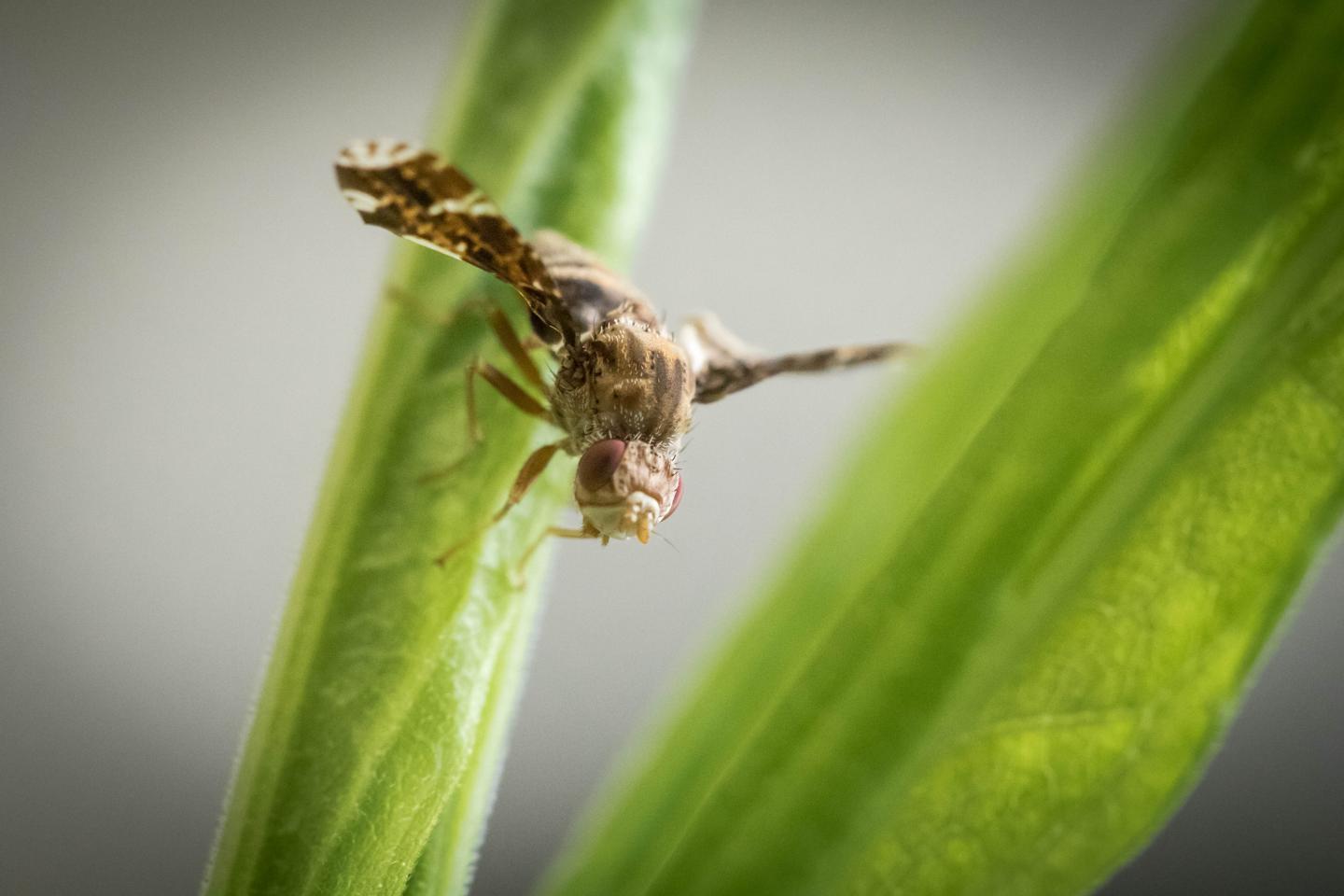 IMAGE: Over time goldenrod plants and the gall flies that feed on them have been one-upping each other in an ongoing competition for survival. Now, a team of researchers has discovered...

UNIVERSITY PARK, Pa.-- Over time goldenrod plants and the gall flies that feed on them have been one-upping each other in an ongoing competition for survival. Now, a team of researchers has discovered that by detecting the plants' chemical defenses, the insects may have taken the lead.

According to John Tooker, professor of entomology, this complex scenario begins when a female gall fly (Eurosta solidaginis) lays its eggs in the leaf bud of a goldenrod plant (Solidago altissima). This action forces the plant to produce a tumor-like growth, called a gall. This gall, he said, provides the fly larvae with a source of nutrition and safety from predators and the environment but decreases the plants' ability to reproduce.

"Our previous research showed that goldenrod plants have evolved to 'eavesdrop' on the sexual communications of their gall fly herbivores -- specifically, the sex pheromones used by males to attract females," he said. "Our new research, suggests that the plants respond to this 'intelligence' by strengthening, also known as 'priming,' chemical defenses to prevent females from laying eggs and inducing gall formation."

Eric Yip, postdoctoral scholar in the Department of Entomology, Penn State, explained that this plant-insect dynamic is similar to the reversals of fortune that occur in the "Spy vs. Spy" comic strip, only the characters are a plant and an insect rather than a pair of cartoon drawings.

To investigate the effects of priming, the researchers in their new study exposed almost 300 goldenrod plants comprising 11 genetic types -- or genotypes -- to male flies that varied in age, from one to four weeks old, as well as a control in which the plants were not exposed to flies. Next, the team allowed already-mated females to access the plants, and they counted the number of times a female inserted her ovipositor -- egg-laying device -- into the flower buds as a measure of her preference for particular plants. The team then tracked gall formation.

The findings appear today (July 9) in the Journal of Ecology.

The scientists found that although priming led to reduced gall formation overall, its effects varied by the age of the male flies used for priming. Priming by younger males resulted in significantly fewer galls, while priming by older males yielded more galls.

"The female flies in our study appeared to 'know' -- likely via some sort of code breaking that we have yet to understand -- that their offspring would be most successful on plants that had been primed to a lesser degree by the older males.

The effects of priming also differed by plant genotype.

"One genotype became completely resistant to galling after priming, but another became more vulnerable when exposed to older male flies," said Yip. "So, the plant evolved to protect itself against the fly, and subsequently the fly, at least on some plant genotypes, has evolved to make galls more likely."

The team plans to next investigate how flies, through their avoidance of primed plants, may be asserting further selective pressure on the evolution of this defense.

"Ultimately," Tooker said, "the findings could have practical applications in agriculture, perhaps enabling us to enhance crop plants' defenses against pests without the use of toxic pesticides."