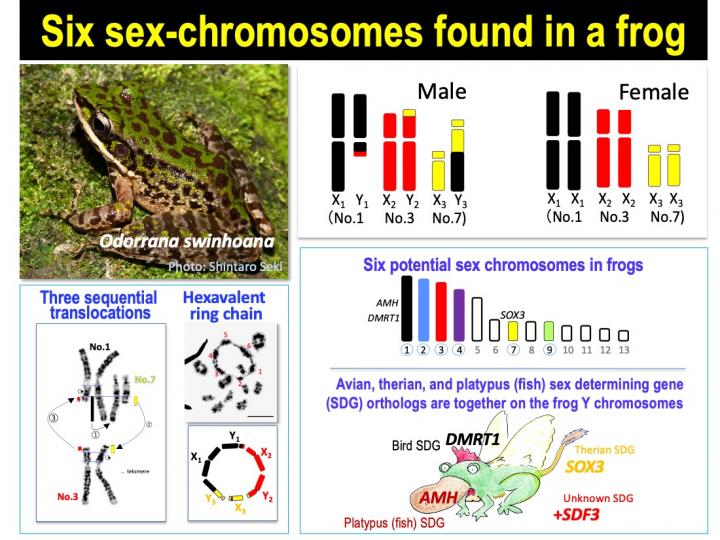 The discovery was a surprise to the international research team led by Associate Professor Ikuo Miura of Hiroshima University's Amphibian Research Center. In 1980, the first reported instance of multiple sex chromosome systems in amphibians was found in the Taiwanese brown frog Raina narina -- a synonym for O. swinhoana -- which had a male-specific translocation between two chromosomes. Its sex chromosomes could be described as ?X1Y1X2Y2-?X1X1X2X2.

The finding suggested that translocation -- a chromosomal abnormality that happens when a chromosome breaks and its fragment fuses to another -- occurred between two potential sex-determining chromosomes. At that time, however, the identification of the chromosomes involved in the translocation was uncertain.

So when the researchers set out to precisely identify the chromosomes involved, they were expecting only one translocation and not three. The three male-specific translocations created a system of six sex chromosomes, ?X1Y1X2Y2X3Y3-?X1X1X2X2X3X3. Their findings were published in the journal Cells last March 16, 2021.

A first among vertebrates

What's more, the research team uncovered that the potential sex-chromosomes involved in the translocations contained orthologs of the sex-determining genes in mammals, birds, and fishes. Orthologs are genes that evolved from an ancestral gene found in the shared ancestor of those species.

This is the first time that sex chromosomes containing orthologs of the sex-determining genes in mammals, birds, and fishes are found together in a vertebrate species.

Miura explained that up to now sex chromosome-autosome fusion has been documented as a chance occurrence.

"In fact, it was like that in this frog, too. The break and fusion of the chromosomes may have occurred by chance," he said.

But the researchers believe that the chromosome members involved in the fusions were selected non-randomly or inevitably chosen as they probably share a common genomic region.

"To be so, the three may share a common DNA sequence on each of them, which makes them closely localized to each other, and this makes it possible to join the simultaneously occurring breakages and translocations."

"This rare case suggests sex-specific, nonrandom translocations and thus provides a new viewpoint for the evolutionary meaning of the multiple sex chromosome system."

Miura said identifying the genomic sequence common to the potential sex chromosomes would improve understanding of the mechanisms of its evolution and turnover.