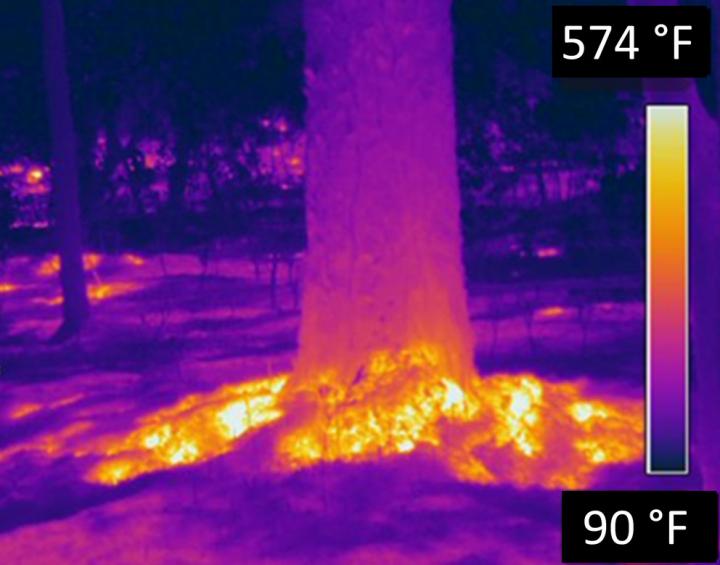 IMAGE: This infrared image shows that long-duration heating was most prominent where accumulated forest floor duff was deepest, particularly at the base of mature pines in long-unburned sites. Temperatures potentially lethal...

Many decades of forest fire prevention and suppression has resulted in a thick buildup of organic matter on the forest floor in many regions of the United States, according to a Penn State researcher, whose new study suggests that the peculiar way that these layers burn should be considered in plans for controlled burns.

In both the eastern and western U.S., one of the consequences of avoiding fires for so long in fire-adapted pine forests is the build-up of forest floor "duff" -- a deep, dense layer of partially decomposed pine needles -- that would otherwise not accumulate under a frequent fire regime, explained Jesse Kreye, assistant research professor of fire and natural resources management in the College of Agricultural Sciences.

That accumulation of organic debris can complicate efforts to use prescribed fire as a forest management tool, he explained, and this buildup of duff, particularly pronounced at the base of pines, is problematic if there is a wildfire.

"When these forests do burn under dry conditions, the long-duration smoldering that occurs in this dense duff -- long after the 'flames' have gone out -- results in significant heat transfer to the tree as well as the soil," Kreye said. "That can result in mortality of large, older pines and potential ecological consequences below ground."

Restoring fire to these ecosystems with controlled burns requires particular burn prescriptions that will minimize duff smoldering, Kreye pointed out. This is primarily done, he said, through burning under a range of duff moistures that can result in some consumption of duff but not enough to cause significant damage.

"Repeated burns under these conditions can slowly restore bare ground by consuming some duff each time. That measured approach is important for pine regeneration as well as herbaceous plants that have been absent as a result of fire exclusion," said Kreye.

This duff-danger is a major issue in the South in longleaf pine ecosystems that are very well adapted to frequent fire, Kreye noted. Longleaf pine forests naturally have one of the most frequent-fire regimes of any forest ecosystems, burning every three to five years on average. But the phenomenon is not limited to the southeastern U.S., Kreye contends.

"This is an issue in many Western pine forests as well, particularly ponderosa pine forests that range across much of the western U.S.," he said. "This is also a likely problem in pine forests of the east that have depended on regular burning, such as red pine, pitch pine and shortleaf pine."

Prescribed fire is commonly used in southeastern U.S. forests and is being applied more widely in fire-prone ecosystems elsewhere. Research on direct effects of burning has focused on above ground impacts to plants with less attention to below ground effects, Kreye said. This study, recently published in Forest Science, is among the first to look at below ground effects of forest fire.

Researchers used probes attached to thermometers to measure soil heat at sampling locations after controlled fires near the bases of mature trees in a longleaf pine flatwoods ecosystem and a longleaf pine sandhill ecosystem, both in northern Florida. They found that soil heating was minimal in frequently burned sites. Where fire had been excluded for several decades, however, they detected substantial soil heating sustained for considerable durations.

Long-duration heating was most prominent where accumulated forest floor duff was deepest, particularly at the base of mature pines in long-unburned sites. Temperatures potentially lethal to plant tissues -- at or above 140 degrees Fahrenheit -- were sustained for several hours as deep as 4 inches near pines in flatwoods sites. Sustained temperatures at or above 500 F -- when impacts to soil nutrients can occur -- were observed for up to 35 minutes at soil surfaces.