For easy tasks, brain preps and decides together

A Georgia Tech researcher has discovered that for tasks involving spatial processing, preparing for the task and performing it are not two separate brain processes, but one – at least when there are a small number of actions to choose from. The research appears online in the journal Brain Research.

In a brain imaging study using functional magnetic resonance imaging (fMRI), Eric Schumacher, assistant professor of psychology at the Georgia Institute of Technology, along with colleagues from the University of Pittsburgh and the University of California, Berkeley, monitored the activity of brain regions in subjects while they responded to visual stimuli. 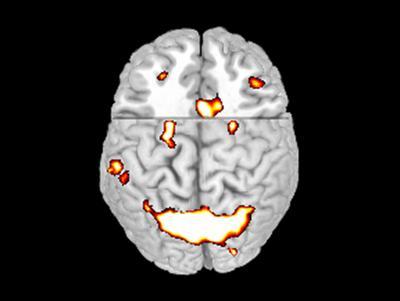 "We found that all of these regions began to activate when the subjects prepared to do the task, even the prefrontal, which is the region that makes the decision on what to do," said Schumacher. "Activating the decision-making region even before the stimulus is presented seems to allow for a quicker response, it allows the brain to get a running start."

When the tasks were cued, all three regions of the brain increased their activity. When there was no cue, there was less activity.

So what does this mean in the real world?

"One analogous situation might be when you're driving and coming up on an intersection where there is a stale green light. You may get ready for the light to change to yellow and then red. My research suggests that this preparation for the upcoming change and appropriate responses involves the same brain regions that are involved in actually pressing the brake (or gas) once the light turns red or yellow," said Schumacher.

Written from a news release by Georgia Institute of Technology.