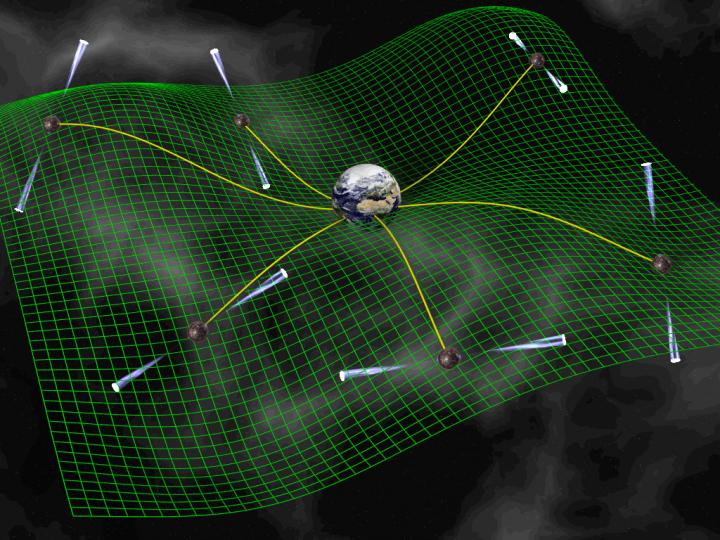 IMAGE: On a quest to find the Universe's largest black holes, Vanderbilt researcher identifies the center of the solar system within 100 meters.

The revolution in our understanding of the night sky and our place in the universe began when we transitioned from using the naked eye to a telescope in 1609. Four centuries later, scientists are experiencing a similar transition in their knowledge of black holes by searching for gravitational waves.

In the search for previously undetected black holes that are billions of times more massive than the sun, Stephen Taylor, assistant professor of physics and astronomy and former astronomer at NASA's Jet Propulsion Laboratory (JPL) together with the North American Nanohertz Observatory for Gravitational Waves (NANOGrav) collaboration has moved the field of research forward by finding the precise location - the center of gravity of our solar system - with which to measure the gravitational waves that signal the existence of these black holes.

The potential presented by this advancement, co-authored by Taylor, was published in the journal the Astrophysical Journal in April 2020.

Black holes are regions of pure gravity formed from extremely warped spacetime. Finding the most titanic black holes in the Universe that lurk at the heart of galaxies will help us understand how such galaxies (including our own) have grown and evolved over the billions of years since their formation. These black holes are also unrivaled laboratories for testing fundamental assumptions about physics.

Taylor and his team are searching for changes to the arrival rate of regular flashes of radio waves from pulsars. These pulsars are rapidly spinning neutron stars, some going as fast as a kitchen blender. They also send out beams of radio waves, appearing like interstellar lighthouses when these beams sweep over Earth. Over 15 years of data have shown that these pulsars are extremely reliable in their pulse arrival rates, acting as outstanding galactic clocks. Any timing deviations that are correlated across lots of these pulsars could signal the influence of gravitational waves warping our galaxy.

"Using the pulsars we observe across the Milky Way galaxy, we are trying to be like a spider sitting in stillness in the middle of her web," explains Taylor. "How well we understand the solar system barycenter is critical as we attempt to sense even the smallest tingle to the web." The solar system barycenter, its center of gravity, is the location where the masses of all planets, moons, and asteroids balance out.

Where is the center of our web, the location of absolute stillness in our solar system? Not in the center of the sun as many might assume, rather it is closer to the surface of the star. This is due to Jupiter's mass and our imperfect knowledge of its orbit. It takes 12 years for Jupiter to orbit the sun, just shy of the 15 years that NANOGrav has been collecting data. JPL's Galileo probe (named for the famed scientist that used a telescope to observe the moons of Jupiter) studied Jupiter between 1995 and 2003, but experienced technical maladies that impacted the quality of the measurements taken during the mission.

Identifying the center of the solar system's gravity has long been calculated with data from Doppler tracking to get an estimate of the location and trajectories of bodies orbiting the sun. "The catch is that errors in the masses and orbits will translate to pulsar-timing artifacts that may well look like gravitational waves," explains JPL astronomer and co-author Joe Simon.

Taylor and his collaborators were finding that working with existing solar system models to analyze NANOGrav data gave inconsistent results. "We weren't detecting anything significant in our gravitational wave searches between solar system models, but we were getting large systematic differences in our calculations," notes JPL astronomer and the paper's lead author Michele Vallisneri. "Typically, more data delivers a more precise result, but there was always an offset in our calculations."

The group decided to search for the center of gravity of the solar system at the same time as sleuthing for gravitational waves. The researchers got more robust answers to finding gravitational waves and were able to more accurately localize the center of the solar system's gravity to within 100 meters. To understand that scale, if the sun were the size of a football field, 100 meters would be the diameter of a strand of hair. "Our precise observation of pulsars scattered across the galaxy has localized ourselves in the cosmos better than we ever could before," said Taylor. "By finding gravitational waves this way, in addition to other experiments, we gain a more holistic overview of all different kinds of black holes in the Universe."

As NANOGrav continues to collect ever more abundant and precise pulsar timing data, astronomers are confident that massive black holes will show up soon and unequivocally in the data.