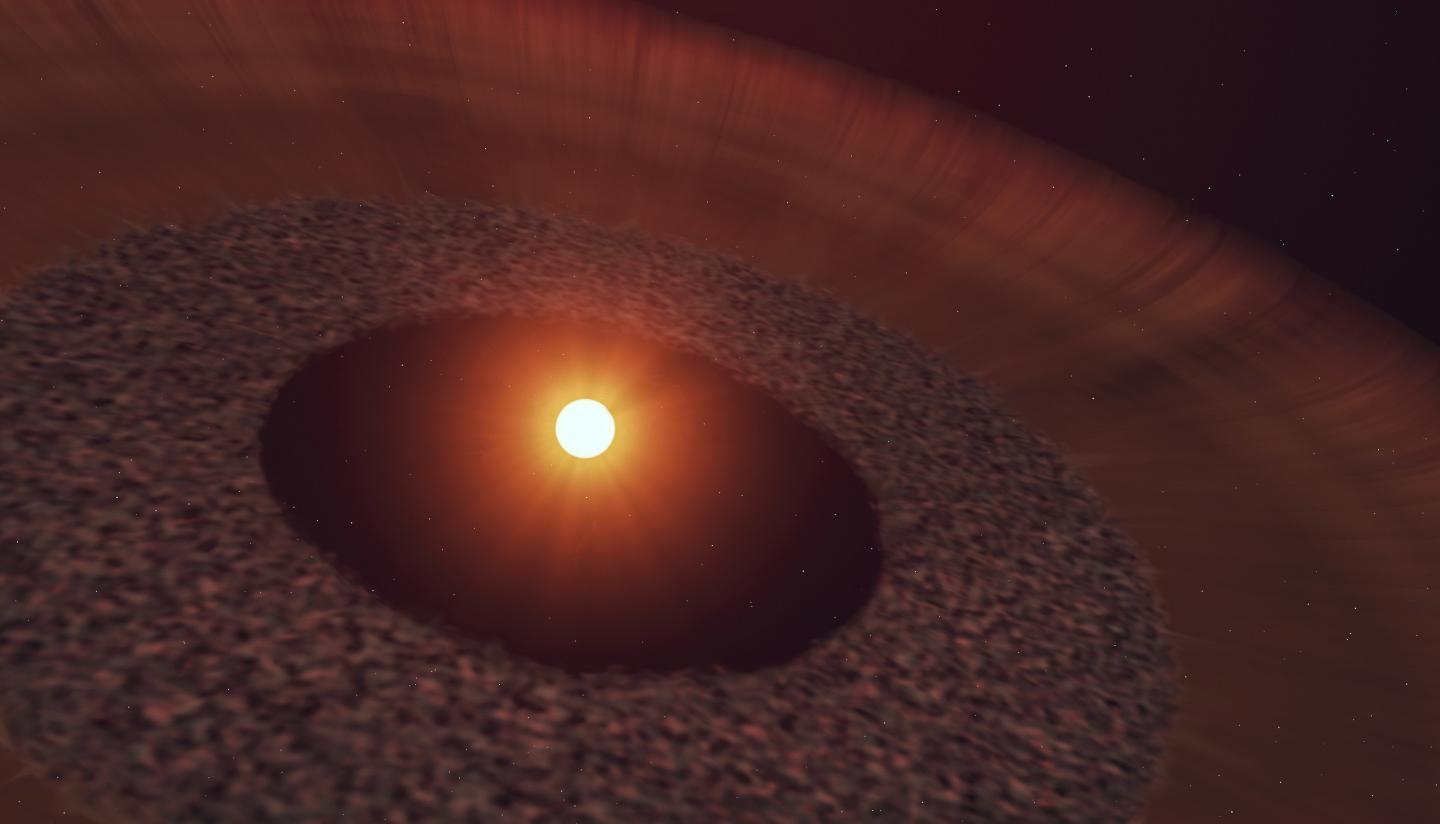 IMAGE: Artist's impression of the system, with the star at the center, and the inner dust belt from which gas is produced and dispersed outwards to the far reaches of the...

A unique stage of planetary system evolution has been imaged by astronomers, showing fast-moving carbon monoxide gas flowing away from a star system over 400 light years away, a discovery that provides an opportunity to study how our own solar system developed.

Astronomers have detected fast-moving carbon monoxide gas flowing away from a young, low-mass star: a unique stage of planetary system evolution which may provide insight into how our own solar system evolved and suggests that the way systems develop may be more complicated than previously thought.

Although it remains unclear how the gas is being ejected so fast, the team of researchers, led by the University of Cambridge, believe it may be produced from icy comets being vaporised in the star's asteroid belt. The results will be presented at the Five Years After HL Tau virtual conference in December.

The detection was made with the Atacama Large Millimetre/submillimetre Array (ALMA) in Chile, as part of a survey of young 'class III' stars, reported in an earlier paper. Some of these class III stars are surrounded by debris discs, which are believed to be formed by the ongoing collisions of comets, asteroids and other solid objects, known as planetesimals, in the outer reaches of recently formed planetary systems. The leftover dust and debris from these collisions absorbs light from their central stars and re-radiate that energy as a faint glow that can be studied with ALMA.

In the inner regions of planetary systems, the processes of planet formation are expected to result in the loss of all the hottest dust, and class IIII stars are those that are left with - at most - dim, cold dust. These faint belts of cold dust are similar to the known debris discs seen around other stars, similar to the Kuiper belt in our own solar system, which is known to host much larger asteroids and comets.

In the survey, the star in question, 'NO Lup', which is about 70% the mass of our sun, was found to have a faint, low-mass dusty disc, but it was the only class III star where carbon monoxide gas was detected, a first for this type of young star with ALMA. While it is known that many young stars still host the gas-rich planet-forming discs they are born with, NO Lup is more evolved, and might have been expected to have lost this primordial gas after its planets had formed.

While the detection of carbon monoxide gas is rare, what made the observation unique was the scale and speed of the gas, which prompted a follow-up study to explore its motion and origins.

"Just detecting carbon monoxide gas was exciting, since no other young stars of this type had been previously imaged by ALMA," said first author Joshua Lovell, a PhD student from the Cambridge's Institute of Astronomy. "But when we looked closer, we found something even more unusual: given how far away the gas was from the star, it was moving much faster than expected. This had us puzzled for quite some time."

Grant Kennedy, Royal Society University Research Fellow at the University of Warwick, who led the modelling work on the study, came up with a solution to the puzzle. "We found a simple way to explain it: by modelling a gas ring, but giving the gas an extra kick outward," he said. "Other models have been used to explain young discs with similar mechanisms, but this disc is more like a debris disc where we haven't witnessed winds before. Our model showed the gas is entirely consistent with a scenario in which it's being launched out of the system at around 22 kilometres per second, which is much higher than any stable orbital speed."

Further analysis also showed that the gas may be produced during collisions between asteroids, or during periods of sublimation - the transition from a solid to a gaseous phase - on the surface of the star's comets, expected to be rich in carbon monoxide ice.

There has been recent evidence of this same process in our own solar system from NASA's New Horizons mission, when it observed the Kuiper Belt object Ultima Thule in 2019 and found sublimation evolution on the surface of the comet, which happened around 4.5 billion years ago. The same event that vaporised comets in our own solar system billions of years ago may have therefore been captured for the first time over 400 light years away, in a process that may be common around planet-forming stars, and have implications for how all comets, asteroids, and planets evolve.

"This fascinating star is shedding light on what kind of physical processes are shaping planetary systems shortly after they are born, just after they have emerged from being enshrouded by their protoplanetary disk," said co-author Professor Mark Wyatt, also from the Institute of Astronomy. "While we have seen gas produced by planetesimals in older systems, the shear rate at which gas is being produced in this system and its outflowing nature are quite remarkable, and point to a phase of planetary system evolution that we are witnessing here for the first time."

While the puzzle isn't fully solved, and further detailed modelling will be required to understand how the gas is being ejected so quickly, what is sure is that this system is set to be the target of more intense follow-up measurements.

"We're hoping that ALMA will be back online next year, and we'll be making the case to observe this system again in greater detail," said Lovell. "Given how much we have learned about this early stage of planetary system evolution with only a short 30-minute observation, there is still so much more that this system can tell us."