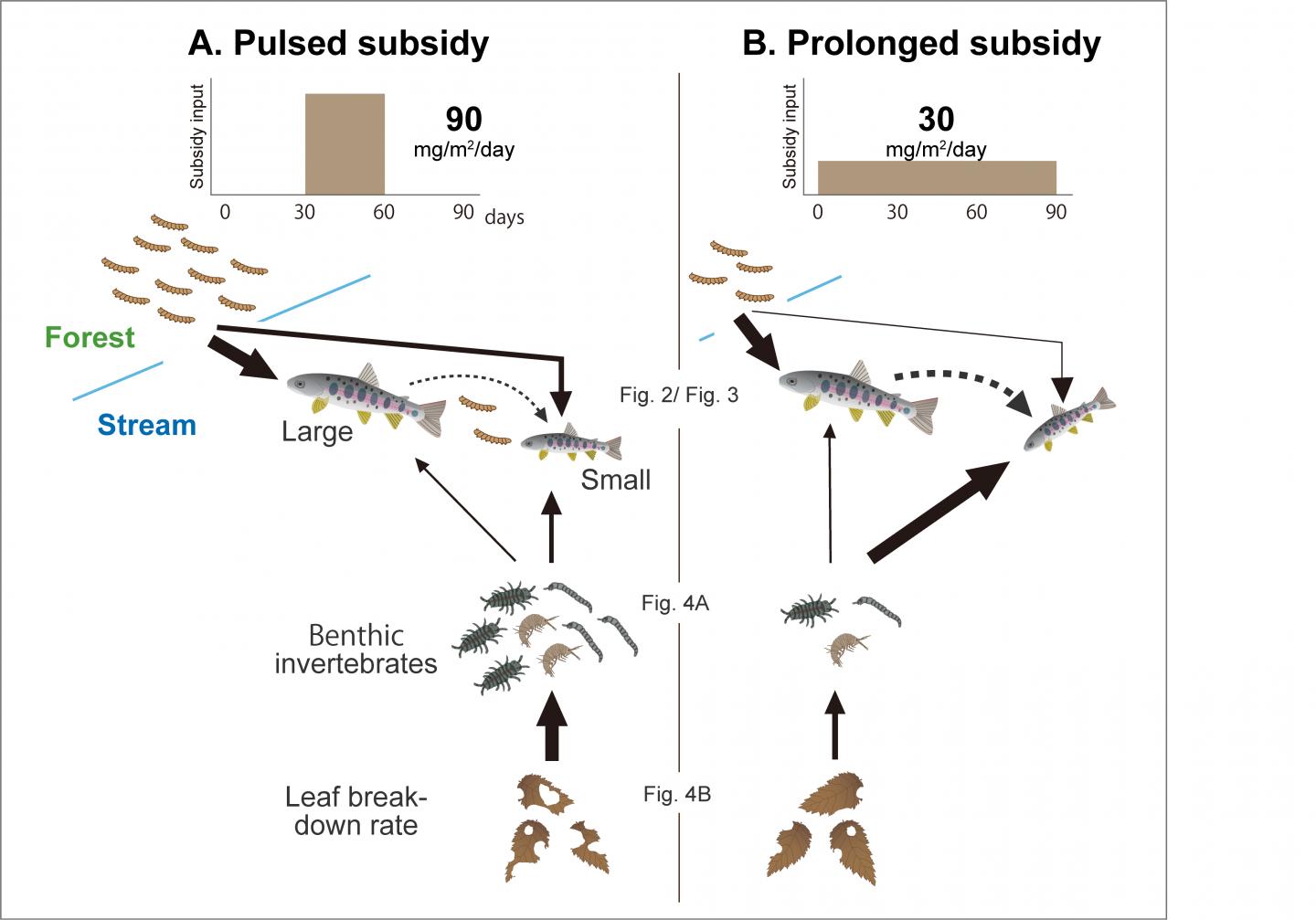 IMAGE: When there is a pulsed (intensive) supply of terrestrial invertebrates, competition between the salmon is reduced, resulting in hardly any size variation between individual fish. In the pulsed groups, the...

Insects that fall from the surrounding forest provide seasonal food for fish in streams. Researchers at Kobe University and The University of Tokyo have shown that the lengthening of this period has a profound effect on food webs and ecosystem functions present in streams.

These research results provide proof that changes in forest seasonality also affect the ecosystems of nearby rivers. This finding highlights the importance of predicting the effects of climate change on ecosystems.

The results were published in the Journal of Animal Ecology on March 4, 2021.

Whether terrestrial insects are available for an intensive or prolonged period of time has a different effect on benthic invertebrate (*1) numbers and the leaf breakdown rate (*2). This result was only observed in the experimental groups where the majority of benthic invertebrates present were easy for the fish to consume.

This study has illuminated that the length of seasonal cycles has a domino effect on ecosystems. Climate change is causing significant alterations in the seasonal cycles of living things. The results of this research indicate the importance of understanding and predicting the response of ecosystems to climate change.

Cold, clear flowing streams are home to many salmonid species including red-spotted masu salmon, cherry salmon and Japanese char (hereafter referred to as 'stream fish'). These stream fish prefer to eat the terrestrial invertebrates that fall into the river from the surrounding forests. When there are many of these land-dwelling insects in the water, the stream fish tend not to eat the benthic invertebrates that reside in the river, such as amphipods and the young of aquatic insects. This results in a sustained large population of benthic invertebrates, which eat the leaves that fall into the water. Consequently, this high population in turn accelerates the speed at which leaves in the river are decomposed (leaf breakdown rate = stream ecosystem functionality). Thus the presence of terrestrial invertebrates changes the diets of fish, which has a big impact (a positive indirect effect (*3)) on river food webs and ecosystem functions (Figure 1).

The amount of terrestrial invertebrates that end up in rivers increases as trees grow new leaves in spring, reaches a peak in early summer, and then decreases as the trees lose their leaves in fall. This seasonal pattern is common to streams located in cool temperate to temperate zones. However, the period between the growth of new leaves and defoliation is short in forests at high latitudes and elevations, but long in forests at low latitudes and elevations. Therefore, even though there may be a similar total number of terrestrial invertebrates in rivers over the course of a year, it is likely that they are present in the water for intensive periods at high latitudes/elevations and prolonged periods at low latitudes/elevations.

What kind of effect does the length of the terrestrial invertebrate supply period have on the food webs of streams and stream fish?

This research study investigated the impacts that different supply periods had on red-spotted masu salmon (Oncorhynchus masou ishikawae), as well as the impact on food webs and ecosystems in streams.

Outdoor experiments were conducted in large pools that mimic river ecosystems at Kyoto University's Wakayama Research Forest Station. The experiments were carried out from August until November 2016, and exactly the same total amount and type of terrestrial invertebrates (mealworms) were supplied in each experiment during the 90-day period. In the pulsed experiment groups, concentrated amounts of mealworms were supplied every day during the 30-day period in the middle of the 90-day experiment (i.e., from the 30th to 60th days), whereas the prolonged experiment groups were given a steady supply of mealworms for a third of the 90-day period (Photos B and C). Control groups that were not given terrestrial invertebrates were also set up. The following aspects were investigated: salmonid fishes' stomach contents and body size, the number of benthic invertebrates, and the leaf breakdown rate.

In the pulsed groups, it was difficult for the bigger fish to monopolize the mealworm supply because a large amount was given at each time, therefore smaller fish were also able to eat mealworms (Figure 2A). After the experiment, it was found that there was little difference in size between fish in the pulsed groups (Figure 3), indicating that these conditions resulted in a community where it was difficult for individual fish to dominate the food supply. Conversely, in the prolonged groups, it was easy for larger fish to monopolize food flowing downstream, meaning that the out-competed smaller fish hardly ate any mealworms (Figure 2A). Post-experiment, a big variation in the size of fish was found in the prolonged group (Figure 3), revealing that these conditions had resulted in a community where large fish could easily monopolize the food supply. Furthermore, individuals that had reached a mature size were found among the dominant fish in the prolonged group, which is also indicative of the impact on population growth.

This research provides initial proof that the length of the period where forest-dwelling insects are present in rivers has an extensive impact on salmon growth rate and size distribution, stream food webs and ecosystem functions. In addition, the effect on stream ecosystems is more pronounced when there is a high population of benthic invertebrate species that are easy for salmon to consume. These results show the vital importance of studying organisms' seasonality, which connects ecosystems such as those of forests and rivers, in order to understand food web structures and ecosystem functions.

Based on these research results, we can see how worldwide climate change is impacting the seasonality of organisms living in specific ecosystems and that these changes in turn are likely to have a significant ripple effect on the surrounding ecosystems. Investigating these aspects, and being able to understand and predict the domino effect that climate change has on ecosystem behavior are important issues in the study of macrobiology.

At present, the researchers have set up observation sites all across Japan, from Hokkaido in the north to Kyushu in the south. They are conducting longitudinal observations on the seasonal rise and decline of forest and river-dwelling insects in collaboration with local researchers. Through a combination of wide-ranging, longitudinal species observations and outdoor experiments like the ones in this study, they hope to deepen our understanding of how climate change impacts ecosystems' seasonal aspects, with a view to being able to predict these effects.