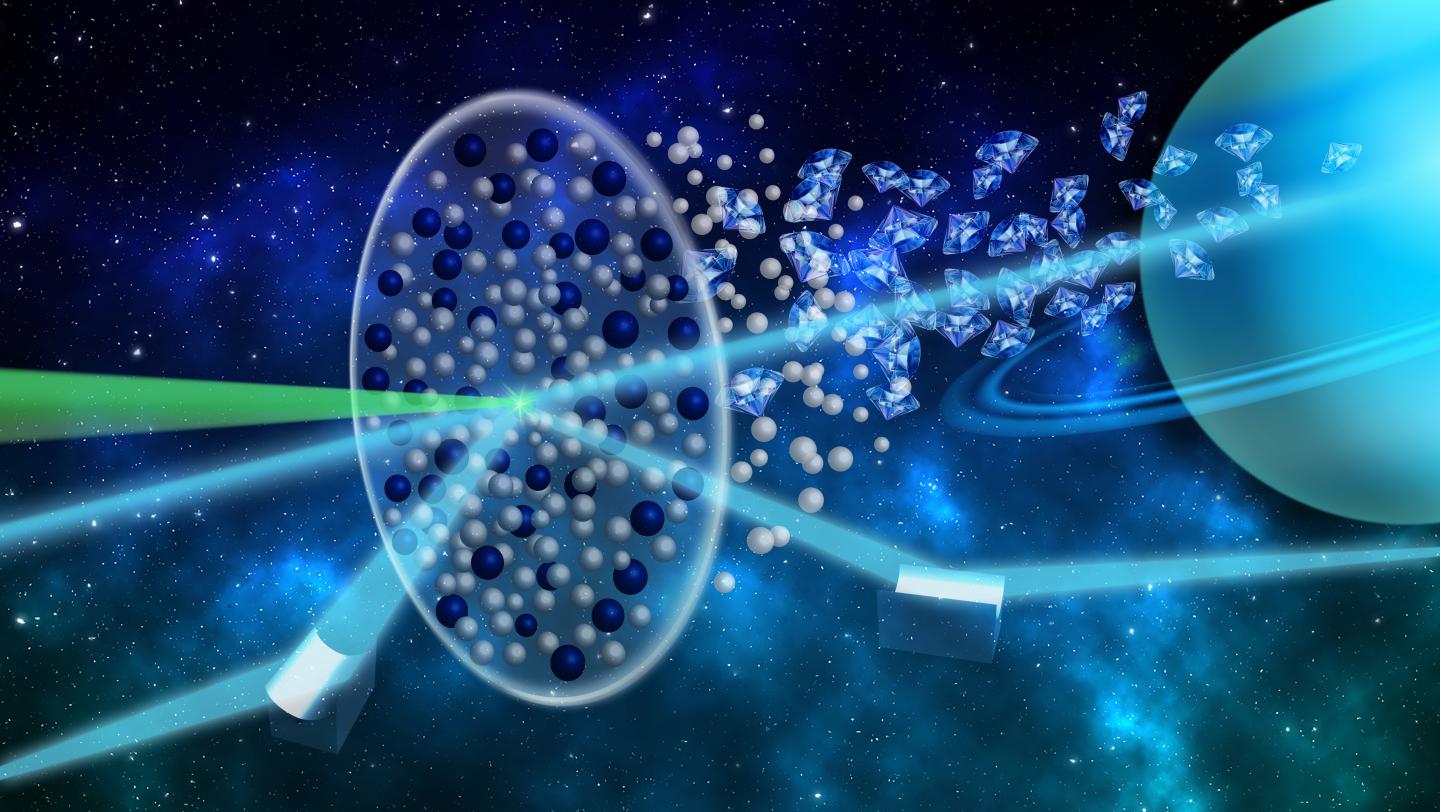 IMAGE: By using a new measuring method -- the so-called X-ray Thomson scattering -- an international team of researchers was able to prove that the high pressure inside planets like Neptune...

Recreating extreme conditions in the lab, like those in the interior of planets and stars, is very complex and can only be achieved for fractions of a second. An international research team led by the Helmholtz-Zentrum Dresden-Rossendorf (HZDR) has now presented a new, very precise method of evaluating the behavior of mixtures of different elements under high pressure with the help of X-ray scattering. The results hone previous measurements and reinforce the premise that the matter in planets like Neptune and Uranus can alter dramatically: the hot hydrocarbon mixture in the interior of the ice giants can produce a kind of diamond rain, as the researchers report in Nature Communications (DOI: 10.1038/s41467-020-16426-y).

Neither solid, nor fluid, neither gaseous, nor a plasma: the matter inside planets and stars can take on a particular intermediate state, at a temperature of thousands of degrees, and compressed a thousand times more than our Earth's atmosphere - experts call it warm dense matter. There is a lot we still don't know about it. Lab experiments are set to change all that but are technically highly complex because this exotic state does not occur naturally on Earth. Which all means that both the crafting and study of artificial warm dense matter is a challenge for investigators and theoreticians alike. "But in the last resort, we have to understand the processes in warm dense matter if we want to model planets," explains Dr. Dominik Kraus, lead author of the study and the mastermind behind the measuring method. "We now have a very promising new approach based on X-ray scattering. Our experiments are delivering important model parameters where, before, we only had massive uncertainty. This will become ever more relevant the more exoplanets we discover."

At SLAC National Accelerator Laboratory at Stanford University, the researchers studied the structure of the matter in mixtures that are typical for planets, in the case of ice giants, hydrocarbon, employing intense laser light. Standard plastic film served as a substitute for planetary hydrocarbon. An optical high-energy laser converts the plastic into warm dense matter: short, strong laser pulses generate shock waves in the film and compress the plastic to the extreme. "We produce about 1.5 million bars, that is equivalent to the pressure exerted by the weight of some 250 African elephants on the surface of a thumbnail," says Kraus, illustrating the dimensions. What happens is that the laser shock waves also heat up the matter to approximately 5,000 degrees. To evaluate the effect, researchers shoot an extremely powerful X-ray laser at the sample. Depending on how the light is scattered as it passes through the sample, they can draw inferences about the structure of the matter.

The researchers observed that in a state of warm dense matter, what was formerly plastic produces diamonds. The high pressure can split the hydrocarbon into carbon and hydrogen. The carbon atoms that are released compact into diamond structures. In the case of planets like Neptune and Uranus this means that the formation of diamonds in their interior can trigger an additional energy source. The diamonds are heavier than the matter surrounding them and slowly sink to the core of the planet in a kind of diamond rain. In the process, they rub against their surroundings and generate heat - an important factor for planet models.

In an earlier experiment, Kraus and his team were the first to prove the possible formation of diamonds in planets using X-ray diffraction in an experimental setting (DOI: 10.1038/s41550-017-0219-9). But the diffraction patterns of X-ray light can only reveal crystalline structures. Using additional detectors, the researchers now also analyzed how the light was scattered by the electrons in the matter. They compared the various scattering components with one another as well as with theoretical simulations. This process enables precise scrutiny of the entire structure of matter. "In the case of the ice giants we now know that the carbon almost exclusively forms diamonds when it separates and does not take on a fluid transitional form," explains Kraus.

The method is not only more sensitive than X-ray diffraction, it can also be used more extensively because it makes fewer technical demands on the light source for the analysis. The international research team is now planning to apply it to hydrogen mixtures similar to those that occur in gaseous planets and to compressed pure hydrogen as found in the interior of small stars. These experiments, which are planned to be conducted, among others, at the Helmholtz International Beamline for Extreme Fields (HIBEF) at the European XFEL, could help researchers to understand the many planets we already know about outside our solar system to ascertain whether life might even be possible on any of them.

Fusion experiments could benefit practically from the new measuring method, as well. Fusion research also tries to recreate on Earth processes that occur under great pressure in stars. During inertial confinement fusion, deuterium and tritium fuels are heated to extremes and compressed - warm dense matter is an intermediate state. With the help of X-ray scattering, this process could be monitored precisely.