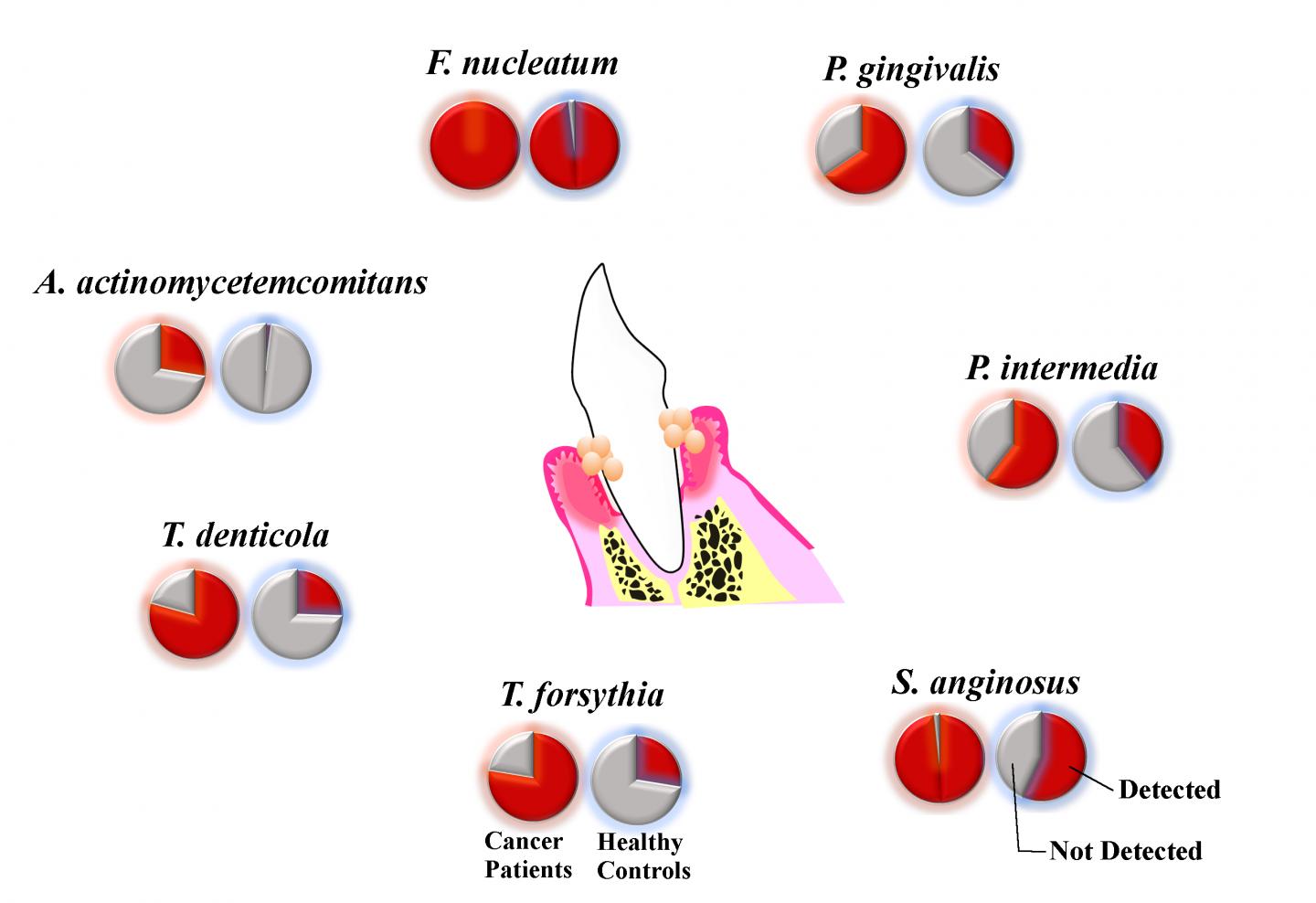 IMAGE: In the dental plaque samples, the prevalence of all bacteria, with the exception of F. nucleatum, was significantly higher in the test group versus the control group. The pie charts...

Researchers led by Tokyo Medical and Dental University (TMDU) find that certain oral pathogens are more prevalent in esophageal cancer patients, and could be used as a novel diagnostic tool

Tokyo, Japan - It is increasingly clear that the trillions of bacteria that make themselves at home in and on the human body are more than just casual observers along for the ride. Gut bacteria in particular have been shown to have an enormous influence on human health, with studies suggesting they play a role in illnesses ranging from autoimmune disorders to anxiety and depression.

The oral cavity is another rich source of microbial diversity, with more than 700 bacterial species making our mouths their home. The vast majority of these species are harmless, but a select few cause conditions such as gingivitis, periodontitis, and abscesses. While the role of these pathogens in periodontal disease is well-characterized, more recent studies have hinted at involvement in gastric and esophageal cancers.

In a recent issue of Cancer, researchers led by Tokyo Medical and Dental University (TMDU) characterized the oral bacterial communities of esophageal cancer patients to look for patterns associated with cancer risk and lay foundations for further exploration of the role of oral pathogens in disease.

"Esophageal cancer is the sixth most deadly cancer worldwide and is often not detected until an advanced stage, meaning that the prognosis is generally poor," says lead author of the study Machiko Kawasaki. "Complicating matters, the two main subtypes of esophageal cancer have different risk factors, presentations, and incidence rates in different populations. A better understanding of the causes of esophageal cancer could therefore help with early detection."

To explore the characteristics of the oral bacterial community in esophageal cancer patients, the researchers collected dental plaque and saliva samples from 61 esophageal cancer patients and 62 healthy controls. Using a technique called real-time polymerase chain reaction, the researchers screened DNA extracted from the plaque and saliva samples to determine the abundance of seven common periodontal pathogens in the bacterial population as a whole.

Overall, the researchers determined that an increased prevalence of Streptococcus anginosus and Tannerella forsythia in dental plaque and Aggregatibacter actinomycetemcomitans in saliva, and also alcohol consumption, were associated with a high risk of esophageal cancer.

The study findings are an exciting indication of the diagnostic potential of oral bacteria in esophageal cancer and could form the basis of future screening methods.