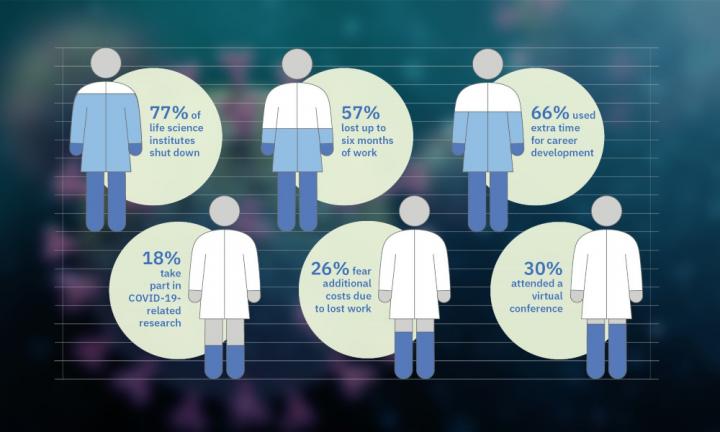 IMAGE: EMBL scientists performed a survey among more than 800 life scientists from different institutes to learn about the drawbacks, fears, but also advantages of the COVID-19 situation for researchers.

Jan Korbel and Oliver Stegle, both group leaders at EMBL Heidelberg, have performed a survey of fellow life scientists in Germany, Spain, the UK, Italy, France, Canada, Turkey, and the USA to learn how the current crisis, with partial or complete institutional shutdowns, is affecting their work.

The two researchers received 881 responses in total. Of the respondents, 77% stated that their institute had been fully shut down, with only essential service staff present on site. A partial shutdown, with less than half of the institute being operational, was reported by 19%. These numbers show the severe impact on the ability of researchers to work in their usual offices or labs.

The closure of the institutes also meant that more than half of the researchers lost part of their work on ongoing experiments, requiring between a single month and half a year to repeat. Personnel working in wet labs were more affected by this problem than computational researchers in dry labs.

Korbel and Stegle also analysed the stress level of participants and identified two potential risk groups. One was young trainees - especially trainees working outside their home country in institutes located on a different continent. "A third of these scientists live alone and are likely to feel more isolated in the time of a shutdown than their more settled or local colleagues," explains Jan Korbel. The second group are female scientists. A higher proportion of female respondents were working in wet labs - which have been more affected by the shutdown than dry labs - and they were also more often bound by childcare duties than male respondents.

On the positive side, the survey showed that many researchers used the additional time on data analysis and writing - including manuscripts, theses, and grant applications - which has already led to an increase in manuscript submissions to scientific journals.

Overall, it seems, life scientists have adapted very well to the new circumstances. "The ability to work efficiently from home, and to collaborate productively with life scientists and clinicians nationally and internationally by videoconferencing, without extensive travel, might ultimately even result in benefits for scientific communities and society as a whole," concludes Oliver Stegle.