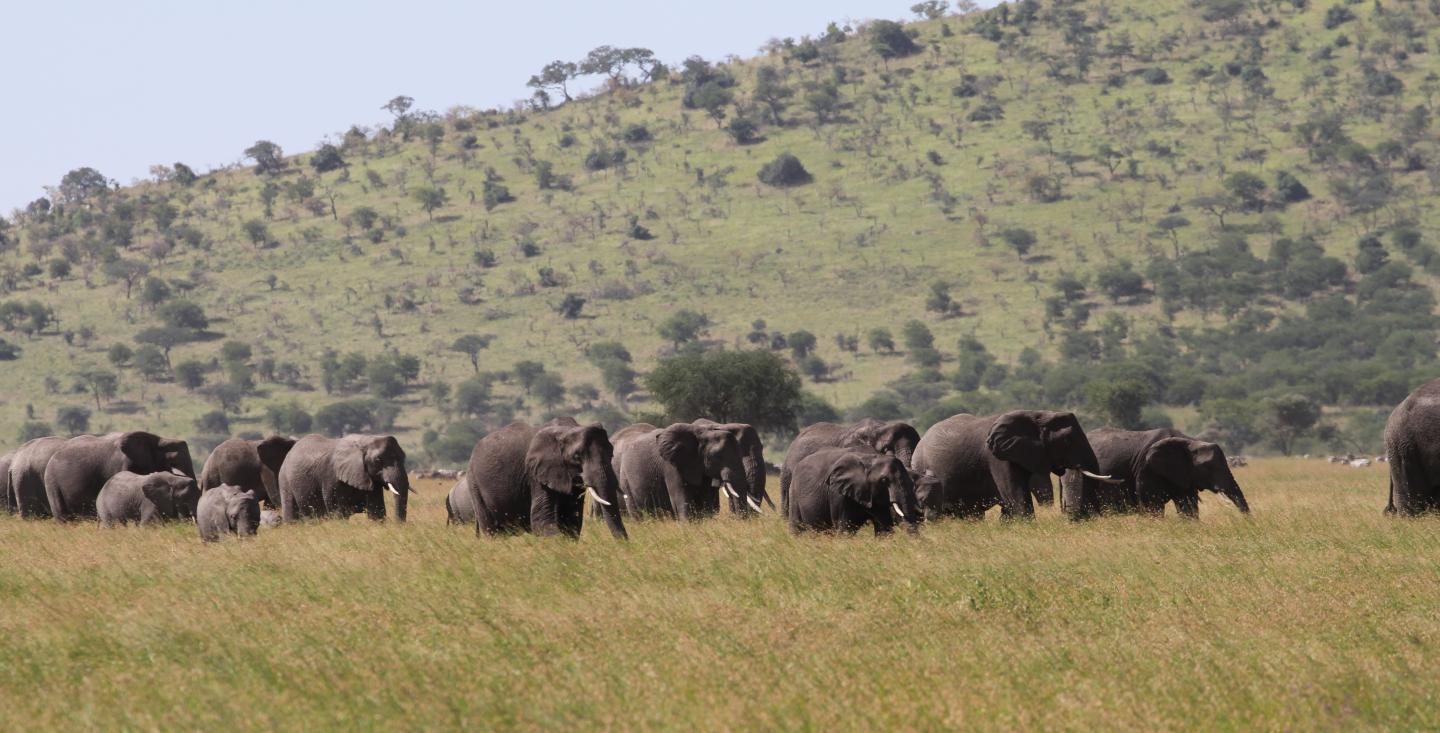 IMAGE: A team of researchers from Penn State explored the genetic relationships among elephant populations in Tanzania, highlighting priority areas for conservation.

UNIVERSITY PARK, Pa. -- A large-scale study of African elephant genetics in Tanzania reveals the history of elephant populations, how they interact, and what areas may be critical to conserve in order to preserve genetic diversity for species conservation. The study, by researchers at Penn State, appears online in the journal Ecology & Evolution and is the first to explore gene flow -- a process vital to maintain necessary genetic diversity for species survival -- between protected areas in Africa.

"Elephants are a hallmark of the savannah, but poaching and habitat loss and fragmentation have led to major population declines across Africa," said George Lohay, postdoctoral scholar in biology at Penn State and first author of the paper. "Human activities accelerate the loss of elephant habitat, as well as the land between protected areas. Maintaining connectivity between protected areas may be especially important for this far-ranging species, particularly with regard to gene flow, which can improve genetic diversity and help buffer small populations against disease and other threats."

The researchers compared both nuclear and mitochondrial DNA of 688 elephants across Tanzania from 4 major areas with large elephant populations. These include the Serengeti and Tarangire-Manyara in north-east Tanzania, Ruaha in south-central Tanzania, and Selous in southeast Tanzania. Each contains several areas with varying levels of protection, including national parks, game reserves, and private land conserved for livestock and wildlife tourism. Many of the wildlife corridors -- the areas between these protected areas -- have closed completely due to human activity.

The researchers suspected that the East African Rift Valley that runs between several protected areas would prevent gene flow between elephant populations. But, interestingly, they found that elephants from Lake Manyara National Park were in some ways more genetically similar to elephants across the rift in the Ngorongoro Conservation Area -- in the Serengeti region -- compared to elephants in the closer Tarangire National Park.

"Even though there are no physical barriers between elephants in Lake Manyara and Tarangire, there is very limited gene flow between the two populations," said Douglas Cavener, professor of biology at Penn State and an author of the paper. "It may be that cultural or behavioral barriers play a role instead. Other studies have tracked elephants moving between the two areas, but they don't appear to be mating with each other."

The similarities among the two groups across the rift suggests that there was gene flow between Ngorongoro and Lake Manyara sometime in the past.

"There is anecdotal evidence from the 1970s of elephants actually climbing across the rift, but most of the corridors connecting Ngorongoro and Lake Manyara have since become occupied by humans," said Cavener. "The Lake Manyara population is now almost completely isolated and contains only about a hundred individuals. The loss of gene flow through these corridors may lead to negative consequences due to inbreeding over the next few generations."

The researchers also found that elephants in Tarangire were genetically similar to those more than 400 km to the south in Ruaha. This suggests extensive gene flow between the two populations before the corridors were closed between them.

"Because elephants are long-lived and because mutation is a slow process, it can take multiple generations to see genetic differences between populations," said Cavener.

"We know there was significant gene flow between elephants in Tarangire and Ruaha in the recent past, but the corridors between the areas are currently blocked. Opening up these corridors could encourage gene flow, which can help maintain more genetically robust populations," added Lohay

The researchers also suspected that the Eastern Arc Mountains in southern Tanzania could prevent gene flow between populations on opposite sides of the mountains in Ruaha and Selous. But while the populations had somewhat similar nuclear DNA, their mitochondrial DNA, which is passed on primarily through the maternal line, was much more varied.

"While female elephants tend to remain in the groups where they were born, males are ejected from the herd when they reach sexual maturity, which can facilitate gene flow between groups," said Lohay. "When you see lots of differences in mitochondrial DNA markers but relatively few differences in nuclear markers, it can be a hint that males are migrating but females are not. It's a crude measurement, but that might be what are seeing here. In the future, we'd like ascertain the parentage and relationships between individuals so we can better understand the role of males in gene flow in these populations."

The study also sheds light onto the history of recolonization of the Serengeti, where elephant populations were almost completely wiped out due to poaching in the late 1800s and, after rebounding somewhat in the 1960s, drastically declined again in the 1980s. The researchers found that mitochondrial DNA of elephants in the northern Serengeti differed from those in the southern Serengeti, suggesting that two distinct groups of elephants arrived from outside the area in the early 1960s when recolonizing the area.

"Understanding these relationships and population histories can help inform future conservation efforts," said Lohay. "This study provides a baseline for future genetic studies on these remarkable animals. We also provide recommendations for wildlife corridors that should be prioritized for conservation in order to maintain potential gene flow between populations. Although we can't be certain elephants will use certain corridors, at the moment they have limited options and are facing serious habitat losses due to human encroachment."