Electron (or 'hole') pairs may survive effort to kill superconductivity 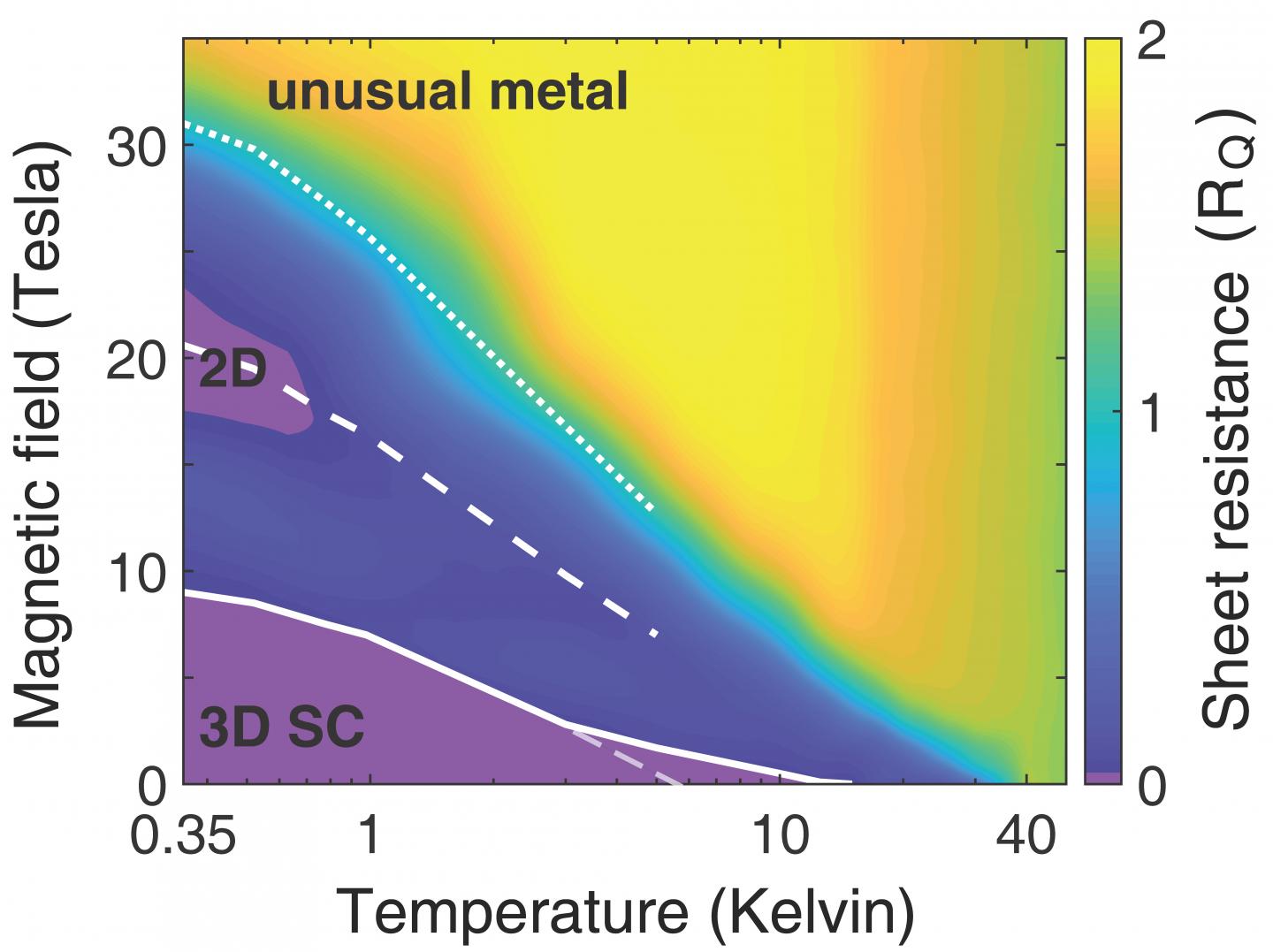 IMAGE: A phase diagram of LBCO at different temperatures and magnetic field strengths. Colors represent how resistant the material is to the flow of electrical current, with purple being a superconductor...

UPTON, NY--Scientists seeking to understand the mechanism underlying superconductivity in "stripe-ordered" cuprates--copper-oxide materials with alternating areas of electric charge and magnetism--discovered an unusual metallic state when attempting to turn superconductivity off. They found that under the conditions of their experiment, even after the material loses its ability to carry electrical current with no energy loss, it retains some conductivity--and possibly the electron (or hole) pairs required for its superconducting superpower.

"This work provides circumstantial evidence that the stripe-ordered arrangement of charges and magnetism is good for forming the charge-carrier pairs required for superconductivity to emerge," said John Tranquada, a physicist at the U.S. Department of Energy's Brookhaven National Laboratory.

Tranquada and his co-authors from Brookhaven Lab and the National High Magnetic Field Laboratory at Florida State University, where some of the work was done, describe their findings in a paper just published in Science Advances. A related paper in the Proceedings of the National Academy of Sciences by co-author Alexei Tsvelik, a theorist at Brookhaven Lab, provides insight into the theoretical underpinnings for the observations.

"In principle, such superconductors could improve the electrical power infrastructure with zero-energy-loss power transmission lines," Tranquada said, "or be used in powerful electromagnets for applications like magnetic resonance imaging (MRI) without the need for costly cooling."

The mystery of high-Tc

LBCO was the first high-temperature (high-Tc) superconductor discovered, some 33 years ago. It consists of layers of copper-oxide separated by layers composed of lanthanum and barium. Barium contributes fewer electrons than lanthanum to the copper-oxide layers, so at a particular ratio, the imbalance leaves vacancies of electrons, known as holes, in the cuprate planes. Those holes can act as charge carriers and pair up, just like electrons, and at temperatures below 30K, current can move through the material with no resistance in three dimensions--both within and between the layers.

An odd characteristic of this material is that, in the copper-oxide layers, at the particular barium concentration, the holes segregate into "stripes" that alternate with areas of magnetic alignment. Since this discovery, in 1995, there has been much debate about the role these stripes play in inducing or inhibiting superconductivity.

"The superconducting layers seem to decouple from one another," Tsvelik, the theorist, said. The current can still flow without loss in any direction within the layers, but there is resistivity in the direction perpendicular to the layers. This observation was interpreted as a sign that charge-carrier pairs were forming "pair density waves" with orientations perpendicular to one another in neighboring layers. "That's why the pairs can't jump from layer to another. It would be like trying to merge into traffic moving in a perpendicular direction. They can't merge," Tsvelik said.

Superconducting stripes are hard to kill

In the new experiment, the scientists dove deeper into exploring the origins of the unusual superconductivity in the special formulation of LBCO by trying to destroy it. "Often times we test things by pushing them to failure," Tranquada said. Their method of destruction was exposing the material to powerful magnetic fields generated at Florida State.

"As the external field gets bigger, the current in the superconductor grows larger and larger to try to cancel out the magnetic field," Tranquada explained. "But there's a limit to the current that can flow without resistance. Finding that limit should tell us something about how strong the superconductor is."

For example, if the stripes of charge order and magnetism in LBCO are bad for superconductivity, a modest magnetic field should destroy it. "We thought maybe the charge would get frozen in the stripes so that the material would become an insulator," Tranquada said.

But the superconductivity turned out to be a lot more robust.

Using perfect crystals of LBCO grown by Brookhaven physicist Genda Gu, Yangmu Li, a postdoctoral fellow who works in Tranquada's lab, took measurements of the material's resistance and conductivity under various conditions at the National High Magnetic Field Laboratory. At a temperature just above absolute zero with no magnetic field present, the material exhibited full, 3-D superconductivity. Keeping the temperature constant, the scientists had to ramp up the external magnetic field significantly to make the 3-D superconductivity disappear. Even more surprising, when they increased the field strength further, the resistance within the copper-oxide planes went down to zero again!

Ramping up the field further destroyed the 2-D superconductivity, but it never completely destroyed the material's ability to carry ordinary current.

"The resistance grew but then leveled off," Tranquada noted.

Additional measurements made under the highest-magnetic-field indicated that the charge-carriers in the material, though no longer superconducting, may still exist as pairs, Tranquada said.

"The material becomes a metal that no longer deflects the flow of current," Tsvelik said. "Whenever you have a current in a magnetic field, you would expect some deflection of the charges--electrons or holes--in the direction perpendicular to the current [what scientists call the Hall effect]. But that's not what happens. There is no deflection."

"My theory relates the presence of the charge-rich stripes with the existence of magnetic moments between them to the formation of the pair density wave state," Tsvelik said. "The observation of no charge deflection at high field shows that the magnetic field can destroy the coherence needed for superconductivity without necessarily destroying the pair density wave."

"Together these observations provide additional evidence that the stripes are good for pairing," Tranquada said. "We see the 2-D superconductivity reappear at high field and then, at an even higher field, when we lose the 2-D superconductivity, the material doesn't just become an insulator. There's still some current flowing. We may have lost coherent motion of pairs between the stripes, but we may still have pairs within the stripes that can move incoherently and give us an unusual metallic behavior."