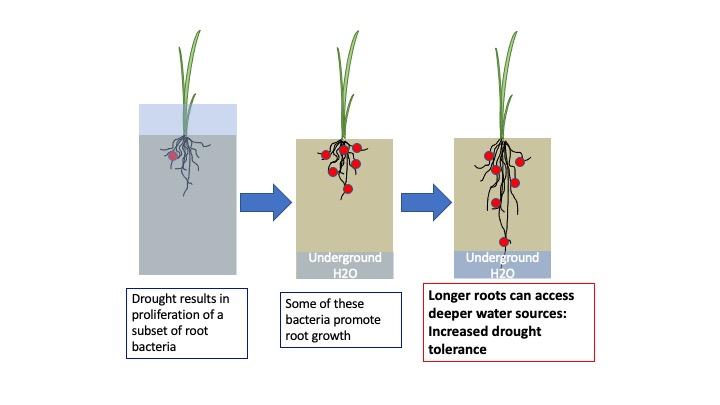 image: Depriving growing rice plants of water causes a shift in the microbiome or community of microbes in their roots that persists after the drought ends. Some of these microbes can promote root elongation, priming the plant to better withstand subsequent dry spells.

Drought can have a lasting impact on the community of microbes that live in and around roots of rice plants, a team led by UC Davis researchers has found. Root-associated microbes help plants take up nutrients from the soil, so the finding could help in understanding how rice responds to dry spells and how it can be made more resilient to drought. The work is published July 22 in Nature Plants.

Venkatesan Sundaresan, distinguished professor of plant biology in the UC Davis College of Biological Sciences and colleagues looked at changes in rice root microbes over time when plants were deprived of water for 11, 21 or 33 days. This kind of intermittent drought condition is more common in rain-fed crops than terminal drought, Sundaresan said.

As expected, the microbe community changes when water is taken away. More surprising is that the changes persisted for weeks after plants were watered again.

"Rice plants carry a 'memory' of the drought episode in their root microbiota, so that plants that have experienced drought can be distinguished solely on the basis of their microbiomes," Sundaresan said.

The team was able to culture and sequence the most abundant of these persistent microbes. It was a species of Streptomyces that promotes growth of plant roots, a classic response to drought. The bacteria's DNA includes genetic code similar to plant genes for the growth hormone auxin.

"The persistence of changes to the microbiome means that root elongation continues even after drought has ended. This allows the roots to be better prepared to tap deep water," Sundaresan said. For some drought tolerant rice cultivars, after a drought episode, the roots will continue to grow long enough to penetrate the hardpan, he said.

The persistent changes also mean that the microbiome response will be more rapid the next time drought hits, because it is altered from the first drought.