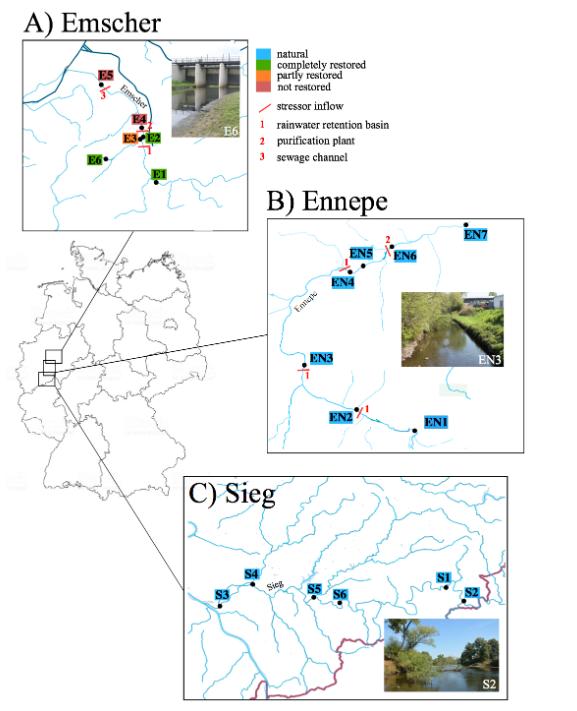 IMAGE: Sample sites at river A) Emscher, B) Ennepe and C) Sieg.

Metabarcoding allows scientists to extract DNA from the environment (known as environmental DNA or eDNA), for example, river water or, as in the case of the study by the team from the University of Duisburg-Essen (Essen, Germany) within the German Barcode of Life project (GBOL II): Vera Zizka, Dr Martina Weiss and Prof Florian Leese, from individuals in bulk samples. Thus, they are able to detect what species inhabit a particular habitat.

However, while the method has already been known to be of great use in getting an approximate picture of local fauna, hence facilitating conservation prioritisation, few studies have looked into its applicability to infer responses below species level. That is, how the populations of a particular species fare in the environment of interest, also referred to as intraspecific diversity. Meanwhile, the latter could actually be a lot more efficient in ecosystem monitoring and, consequently, biodiversity loss mitigation.

The potential of the method is confirmed in a new study, published in the peer-reviewed scholarly journal Metabarcoding & Metagenomics. To do so, the researchers surveyed the populations of macroinvertebrate species (macrozoobenthos) in three German rivers: Emscher, Ennepe and Sieg, where each is subject to a different level of ecological disturbance. They were looking specifically at species reported at all of the survey sites by studying the number of different haplotypes (a set of DNA variations usually inherited together from the maternal parent) in each sample. The researchers point out that macrozoobenthos play a key role in freshwater ecosystem functionality and include a wide range of taxonomic groups with often narrow and specific demands with respect to habitat conditions.

"As the most basal level of biodiversity, genetic diversity within species is typically the first to decrease, and the last to regenerate, after stressor's impact. It consequently provides a proxy for environmental impacts on communities long before, or even if never visible on species diversity level," explain the scientists.

Emscher is an urban stream in the Ruhr Metropolitan Area that has been used as an open sewage channel for the past hundred years, and is considered to be a very disturbed environment. Ennepe - regarded as moderately stressed - runs through both rural and urban sites, including ones with sewage treatment plant inflow. Meanwhile, Sieg is considered as a stable, near-natural river system with a good ecological and chemical status.

As a result, despite their original assumption that Sieg would support the most prominent diversity within populations of species sensitive to organic pollution, such as mayflies, stoneflies and caddisflies, the scientists reported no significant difference to the medium stressed river Ennepe. This was also true for overall biodiversity. On the other hand, the team discovered higher intraspecific diversity for species resilient to ecological disturbance like small worms and specialised crustaceans in the heavily disturbed Emscher. The latter phenomenon may be explained with low competition pressure for these species, their ability to use organic compounds as resources and, consequently, increased population growth.

"[T]his pioneer study shows that the extraction of intraspecific genetic variation, so-called 'haplotypes' from DNA metabarcoding datasets is a promising source of information to assess intraspecific diversity changes in response to environmental impacts for a whole metacommunity simultaneously," conclude the scientists.

However, the researchers also note limitations of their study, including the exclusion of specialist species that only occured at single sites. They prompt future studies to also carefully control for the individual number of specimens per species to quantify genetic diversity change specifically.