Discovery of periodic tables for molecules 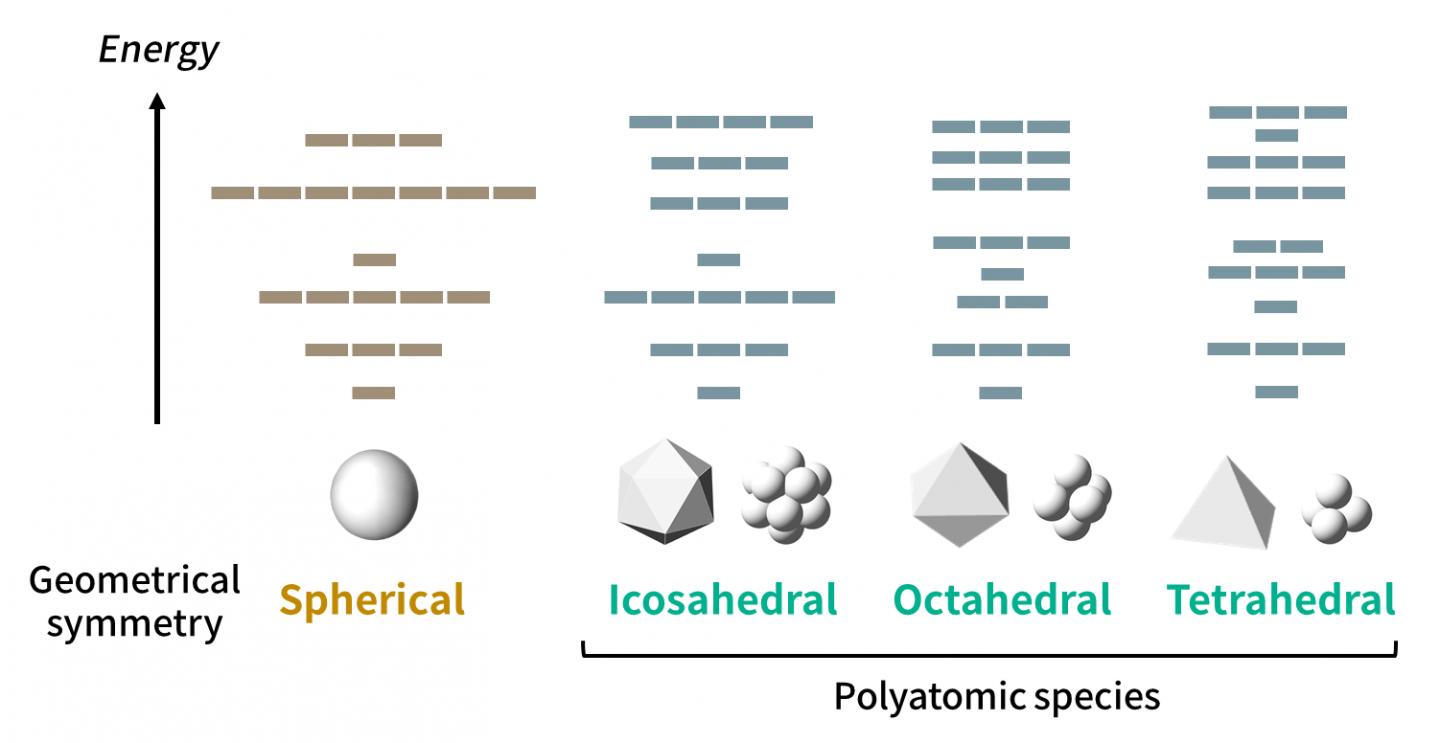 IMAGE: The proposed model accounts for orbital patterns obeying certain rules for many types of symmetries. Although a sphere has the highest geometrical symmetry, there is no real polyatomic species with...

The periodic table of elements was proposed in 1869, and thereafter became one of the cornerstones of the natural sciences. This table was designed to contain all the elements (atoms) found in nature in a special layout that groups them in rows and columns according to one of their most important characteristics, the number of electrons. Scientists have used the periodic table for decades to predict the characteristics of the then-unknown elements, which were added to the table over time.

Could there be such a periodic table for molecules? Although some researchers have thought about this possibility and proposed periodic rules for predicting the existence of certain molecules, these predictions were valid only for clusters of atoms with a quasi-spherical symmetry, because of the limitations of their own theory. However, there are many clusters of atoms with other shapes and other types of symmetries that should be accounted for with a better model. Thus, a research team from Tokyo Tech, including Dr. Takamasa Tsukamoto, Dr. Naoki Haruta, Prof. Kimihisa Yamamoto and colleagues, proposed a new approach to build a periodic table for molecules with multiple types of symmetries.

By considering this fact and analyzing the effects of the structural symmetries for clusters (Fig. 1), the researchers proposed "symmetry-adapted orbital (SAO) models," which are in agreement with multiple known molecules as well as state-of-the-art quantum-mechanical calculations. The new periodic tables, which would be created for each symmetry type, would actually be four-dimensional, as shown in Fig. 2, because the molecules would be arranged according to four parameters: groups and periods (based on their "valence" electrons, similar to the normal periodic table), species (based on the constituting elements), and families (based on the number of atoms).

The SAO approach is very promising in the field of materials design. "Modern synthesis techniques enable us to produce many innovative materials based on the SAO model, such as lightweight magnetic materials," states Prof. Yamamoto. The road ahead for scientists lies in further expanding these tables to molecular clusters with other shapes and symmetries and predicting stable molecules that have yet to be developed. "Among the infinite combinations of constitutive elements, the proposed periodic table will be a significant contribution to the discovery of novel functional materials," concludes Prof. Yamamoto.