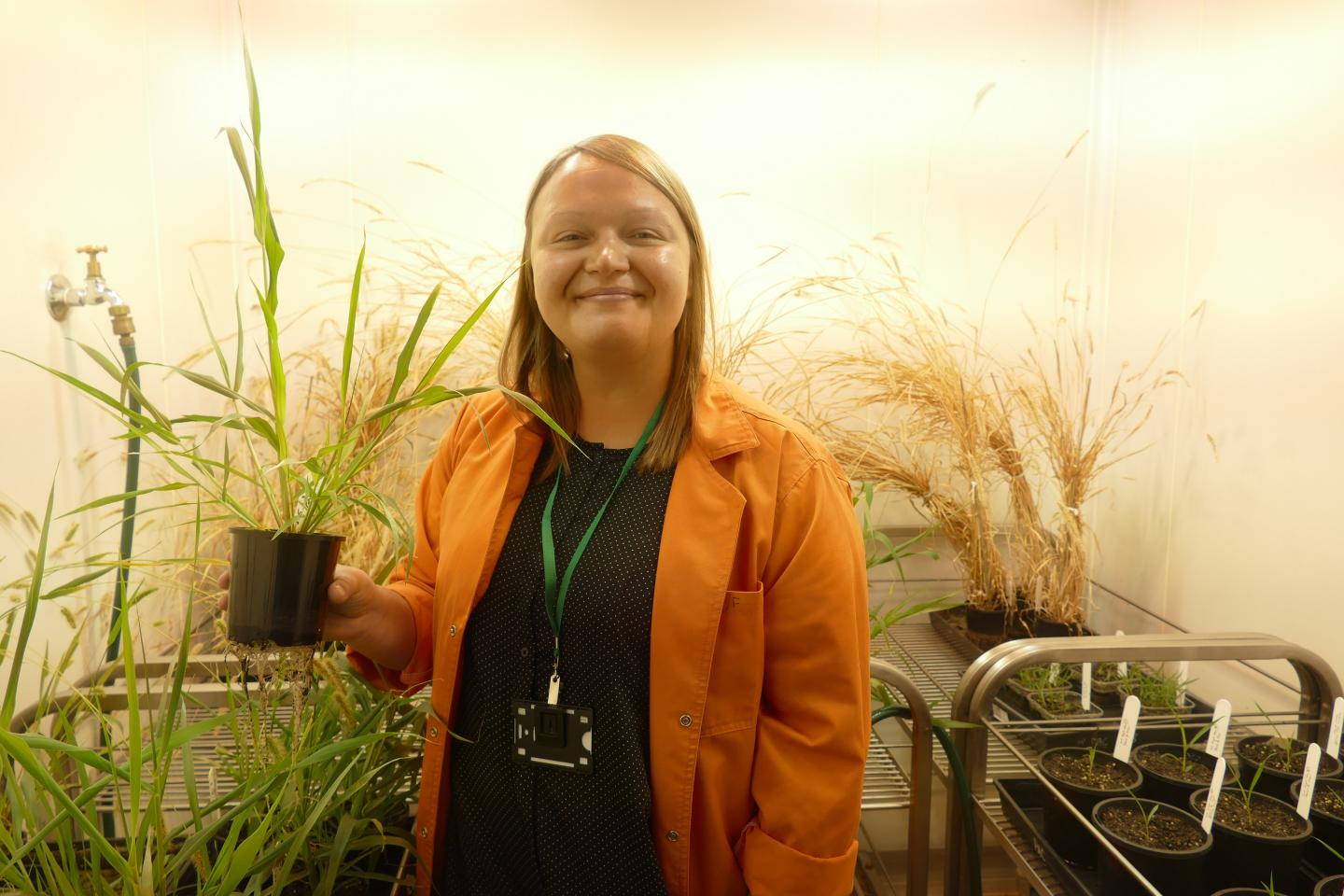 IMAGE: Dr Maria Ermakova with Setaria plants which have been transformed

Scientists have found how to relieve a bottleneck in the process by which plants transform sunlight into food, which may lead to an increase in crop production. They discovered that producing more of a protein that controls the rate in which electrons flow during photosynthesis, accelerates the whole process.

"We tested the effect of increasing the production of the Rieske FeS protein, and found it increases photosynthesis by 10 percent," said lead researcher Dr Maria Ermakova from the ARC Centre of Excellence for Translational Photosynthesis (CoETP).

"The Rieske FeS protein belongs to a complex which is like a hose through which electrons flow, so the energy can be used by the carbon engine of the plant. By overexpressing this protein, we have discovered how to release the pressure of the hose, so more electrons can flow, accelerating the photosynthetic process," said Dr Ermakova, who works at The Australian National University (ANU) Centre Node.

Dr Ermakova, the lead author of the paper published this week in the journal Communications Biology, said that this is the first time that scientists have generated more of the Rieske FeS protein inside plants that use the C4 photosynthesis pathway.

This is despite the fact that C4 crop species-- like maize and sorghum--play a key role in world agriculture, and are already some of the most productive crops in the world.

"These results demonstrate that changing the rate of electron transport enhances photosynthesis in the C4 model species, Setaria viridis, a close relative of maize and sorghum. It is an important proof of concept that helps us enormously to understand more about how C4 photosynthesis works," said CoETP's Deputy Director Professor Susanne von Caemmerer, one of the co-authors of this study.

The Rieske protein is particularly important in environments with high radiance, where C4 plants grow. Previous research has shown that overexpressing the Rieske protein in C3 plants improves photosynthesis, but more research was needed in C4 plants.

"It is really exciting, as we are now ready to transform this into sorghum and test the effect it has on biomass in a food crop," Professor von Caemmerer says.

The research is the result of an international collaboration with researchers from the University of Essex in the UK, who are part of the Realizing Increased Photosynthetic Efficiency (RIPE) project.

"This is a great example that we need international collaborations to solve the complex challenges faced in trying to improve crop production," said University of Essex researcher Patricia Lopez-Calcagno, who was involved in producing some of the essential genetic components for the plant transformation.

"In the last 30 years, we have learnt a lot about how C4 plants work by making them worse--by breaking them as part of the process of discovery. However, this is the first example in which we have actually improved the plants," says Professor Robert Furbank, Director of the ARC Centre of Excellence for Translational Photosynthesis and one of the authors of the study.

"Our next steps are to assemble the whole protein FeS complex, which has many other components. There is a lot more to do and lots of things about this protein complex we still don't understand. We have reached 10 percent enhancement by overexpressing the Rieske FeS component, but we know we can do better than that," says Professor Furbank.