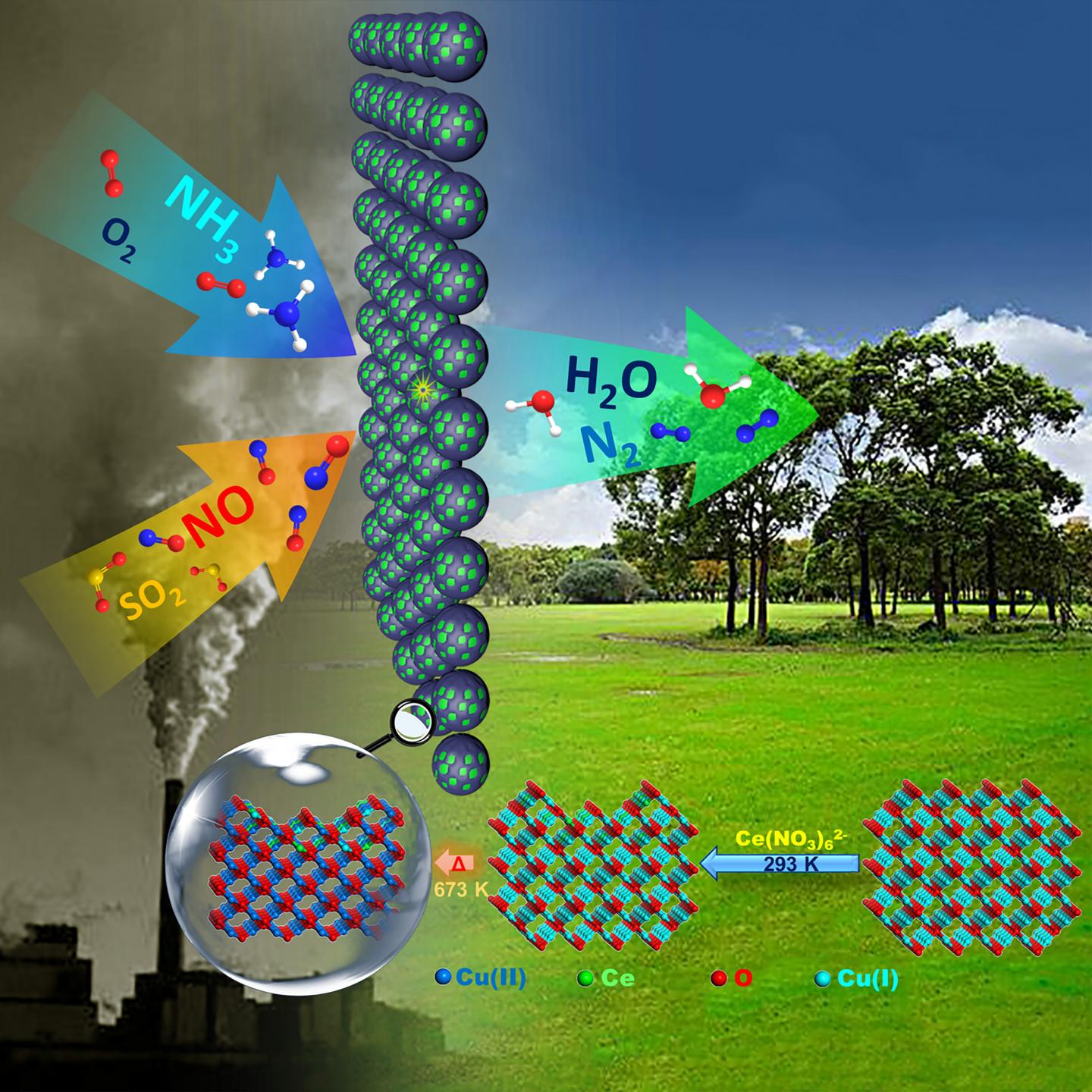 IMAGE: Chemically weaving the surface of Cu-based oxide with Ce initiated from employing Ce(IV) precursor to etch-embed Ce into Cu2O surface was demonstrated to be quite efficient for construction of synergistic...

In a paper to be published in the forthcoming issue in NANO, a team of researchers from Nanchang University have attempted to directly engineer the surface structure of Cu-based substrate to get a series of Ce-O-Cu catalysts for NH3-SCR of NO. The obtained catalysts were structured as CuO matrix with interactive surface composed by Cu(I)-Cu(II) and Ce(III)-Ce(IV) co-present species, exhibiting the distinct synergistic effect and leading to attractive catalytic performance even with SO2 present in reactant mixture.

What is a feasible preparation strategy for engineering oxide composites with interactive structures for advanced heterogeneous catalysis? Here, an attempt to directly construct and manipulate Ce-O-Cu composited surface structures from the design of Ce(IV) to chemically embed Ce into the surface of Cu2O substrate was made, and the thermally-derived samples were investigated as catalysts for NH3 selective catalytic reduction (NH3-SCR) of NO.

The feature of surface structure of solid catalyst such as oxide composites was the decisive factor to govern the performance for heterogeneous catalysis reactions. However, the traditional preparation methods to construct oxide composites such as co-precipitation, sole-gel or solvothermal synthesis were not qualified to manipulate the surface structure of solid materials.

Unlike these body-mingling preparations from traditional methods, in this work, an attempt to directly construct and manipulate composited oxide surface upon a redox replacement preparation was made by employing Ce(IV) precursor to etch Cu2O in order to embed Ce species onto Cu-based oxide surface, and the catalysts derived from thermal stabilization treatments were investigated for NH3-SCR of NO. In principle, the standard potentials for two redox pairs [Ce(IV)/Ce(III)] and [Cu2O/Cu2+] were 1.72 V and 0.20 V, respectively, the lower potential of [Cu2O/Cu2+] pair means Cu2O would act as the reductant when it encountered the Ce(IV) species, i.e., Ce(IV) species could etch Cu2O to produce Cu2+ and Ce(III) species. Since Cu2+ would remove into aqueous solution, the left space on Cu-based solid substrate could facilitate the surface embedding of Ce species. Although Cu(II) contained compounds such as CuO that were always used as precursors or substrates, such Cu(II) compounds would not react with Ce ion species no matter whether Ce(IV) or Ce(III) was employed due to the thermodynamic limitation from the above redox potential disparity. Therefore, the design and preparation of Ce-O-Cu composited samples initiated from employing Ce(IV) contained Ce(NO3)62- ion to etch-embed Ce onto the surface of Cu2O substrate, followed by a thermal-stabilization processing to get catalysts.

With comprehensive characterizations, the design was demonstrated to be quite efficient in creating Cu(I)-Cu(II) and Ce(III)-Ce(IV) co-existed interactive surface on CuO matrix with ultra-low dosage of Ce (0.83-2.3 wt.%) in comparison with literature works. More interestingly, the surface metal species distributions, redox properties, active site distributions and strength, and surface reactivity could be sensitively and conveniently manipulated on such structures, which offered a chance to get superior catalytic performance such as higher NO conversion (≥90% with ≥95% selectivity to N2) below 300°C, fold-increased TOF, good catalytic durability even under the presence of SO2 on well-manipulated sample compared to Ce-Cu reference catalysts prepared from traditional method. All of the above catalytic results were obtained with gas hourly space velocity (GHSV) at 100,000 h-1, and more practical reaction conditions such as (SO2+H2O) co-presence were also imposed on our samples. The superior performance under these conditions together with novel structure and attractive physical chemistry properties of our samples suggest that chemically embedding preparation and derived structures could be a competitive solution to obtain efficient oxide composite materials for practical and advanced applications.