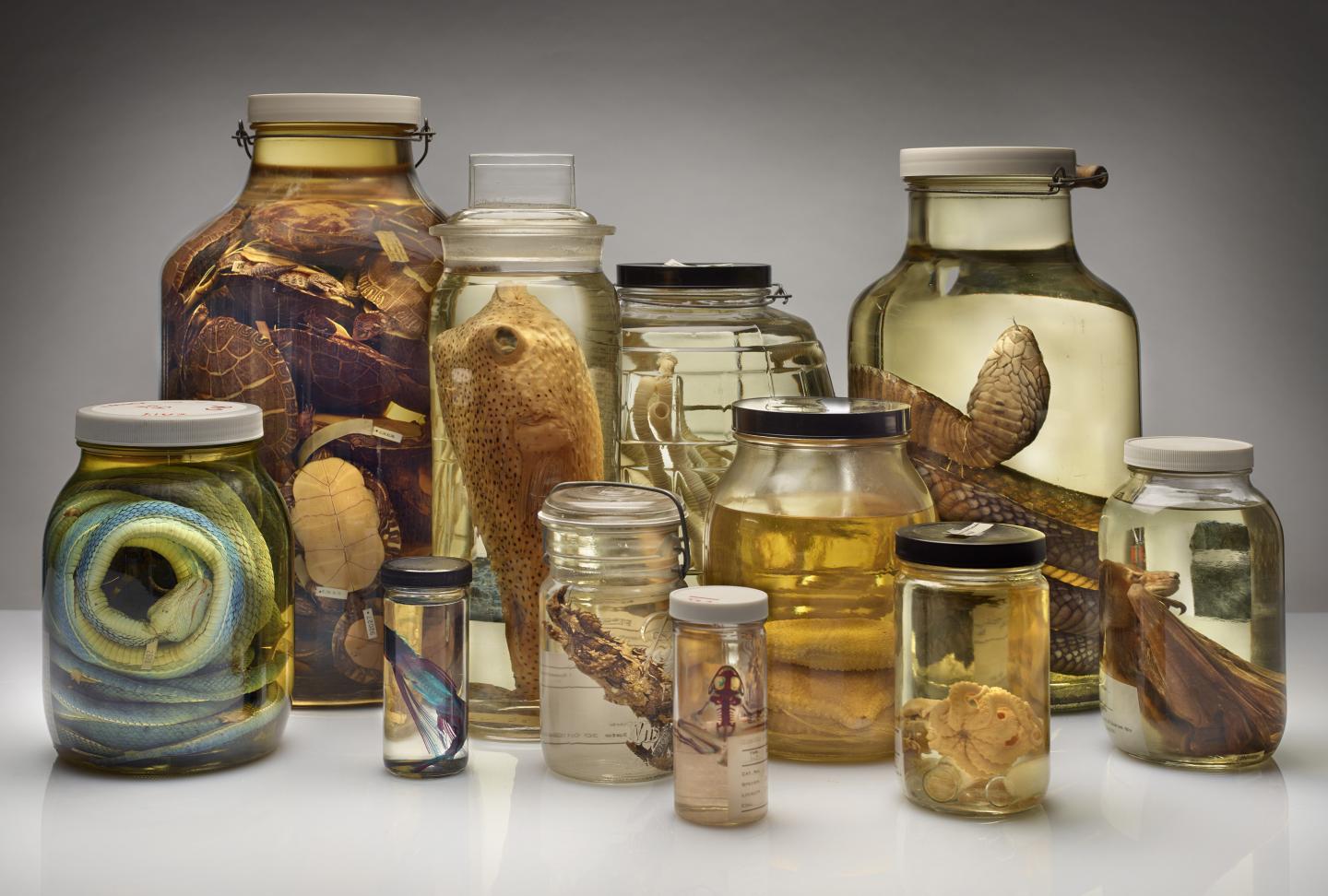 IMAGE: Scientific specimens stored in alcohol in the Field Museum's collections and used in research.

There's a whole world behind the scenes at natural history museums that most people never see. Museum collections house millions upon millions of dinosaur bones, pickled sharks, dried leaves, and every other part of the natural world you can think of--more than could ever be put on display. Instead, these specimens are used in research by scientists trying to understand how different kinds of life evolved and how we can protect them. And a new study in PLOS ONE delves into how scientists are using digital records of all these specimens.

When digitized, information about what each museum specimen is and where it's from becomes part of a repository called a biodiversity database. In these databases, data on individual organisms, entire populations, and whole ecosystems is now free and accessible. Scientists are beginning to explore hundreds of years' worth of information on organisms and ecosystems simply by going online. "It's an interesting time for biodiversity data and scientific data more broadly," says Joan Damerow, a post-doctoral researcher at the Field Museum and the paper's first author. "The field is growing and people are becoming more aware of the importance of making data free to everyone."

With decades of data available for an animal or plant species, scientists can track what has changed over time and tell a story about a species. A group of researchers, led by Field Museum scientists and researchers from the Florida Museum of Natural History and the Universidad de Navarra, decided to determine exactly how these extensive libraries were being used by scientists to tell stories about animals, ecosystems, and other topics. "In the last 10 years, there has been a massive effort by global institutions to digitize decades' worth of data," says Rüdiger Bieler, curator of invertebrates at the Field Museum. "While a single shell or insect in a collection may not tell a story, these libraries of data create new opportunities to study what is happening to populations of animals over time."

Using keywords that indicated the use of a biodiversity database, the researchers examined the full text of hundreds of published papers. "We wanted to look in depth at specifics in the text, including how people are citing databases, how they're taking data errors into account, and what subjects they are studying." says Damerow, lead author. "We found that there's no efficient or automated way to sort through the text of hundreds of papers at this stage?we had to do it manually."

The researchers were able to see which digital records got the most use. Out of all groups of organisms, biodiversity databases are most commonly used to study plants. Plants are a broad and diverse group, so it may simply take much more research, and many more papers, to classify them and study their populations.

On the other hand, the researchers found that not as many scientists published papers using data from insects. A much smaller proportion of insect specimens have been digitized, compared to plants and vertebrates. That might be because of bugs' small sizes and the vast number of them in museum collections--they're often pinned or preserved by the thousands in jars of alcohol, making it daunting to convert each individual specimen's physical label into a digital record that can be searched on a database. Insect population health can be an indicator of ecosystem health, so digitizing and analyzing insect data is important for ecological and conservation research. "It was interesting to me to confirm that vertebrates have more existing online records than invertebrates," says Petra Sierwald, an associate curator of insects, arachnids, and myriapods at the Field Museum and one of the paper's authors. "Because this showed we still have far to go with invertebrate digitization, it renewed my enthusiasm for digitizing insect specimens."

Damerow and her colleagues found that scientists most often use biodiversity databases to find out where different species are found, how many species are present in a region, and how organisms are related to each other. This kind of information helps scientists track species populations, migration patterns, and the spread of disease--crucial information for conservation and public health research. For instance, scientists can see if animals that normally live in cold regions are retreating farther north to deal with climate change.

As the mechanisms to accurately record and explore information improve and become standardized, the ability to make hypotheses and predictions about what has happened or will happen to animal and plant populations will become even more powerful.

"With the biodiversity loss in many ecosystems right now, it's critical to document where and with what abundance different species exist in an environment," says Damerow. "The biodiversity crisis is making it more urgent that we have a place where information on these ecosystems is easily accessible. As species' populations decline, we need efficient methods that help focus conservation efforts and resources."