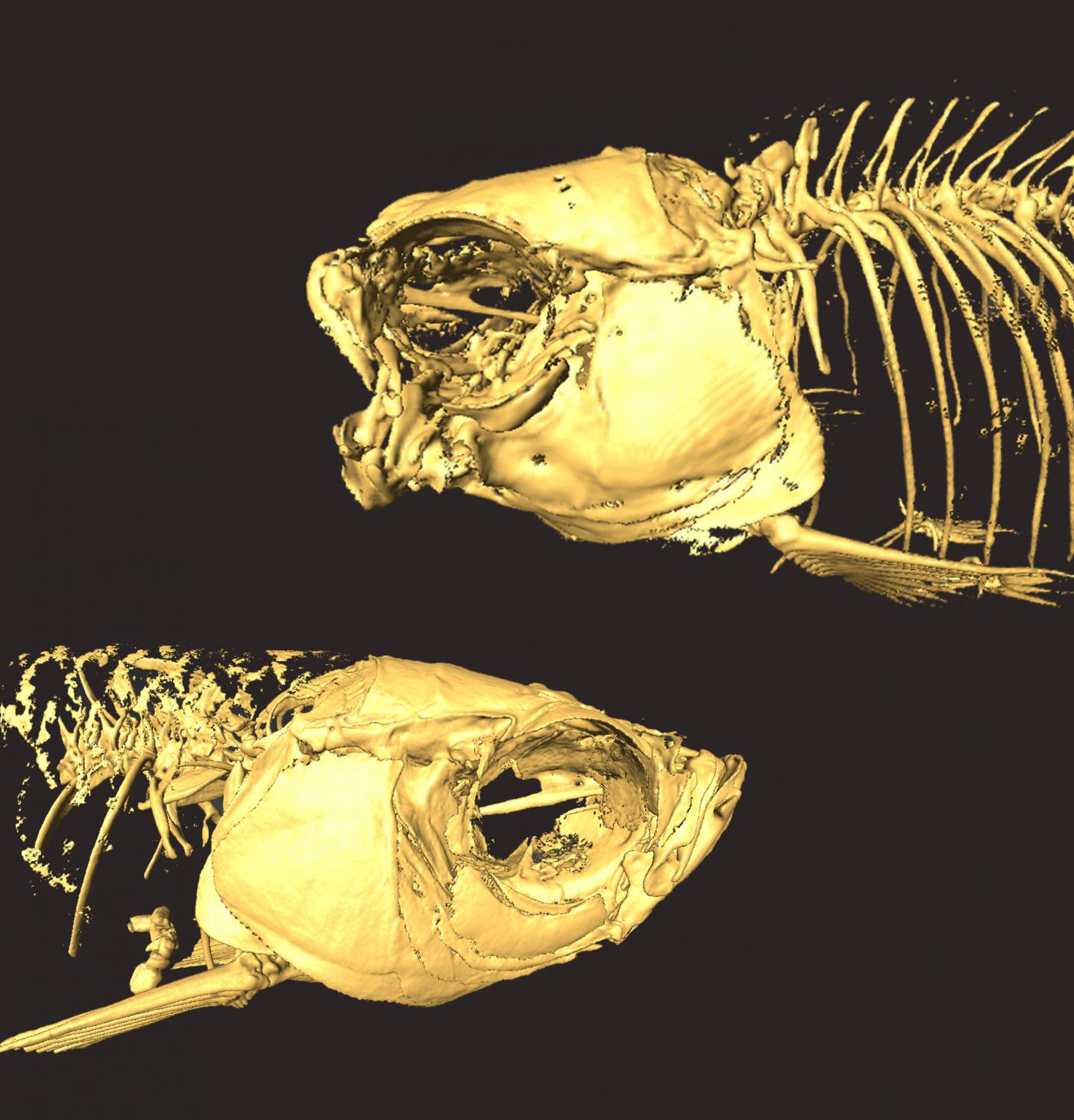 IMAGE: Skeleton of a mutant (top) and normal zebrafish, showing the structural differences with the jaw.

Ottawa, August 5, 2020 - Zebrafish are a common aquarium species, of value to hobbyists and scientists alike. Researchers have now engineered an unusual change in them that has echoes of Jurassic Park--but looks alone are deceiving.

A research team studying jaw evolution in the earliest known vertebrates--fishes from around 400 million years ago--have found that a single-gene mutation in the toe-sized zebrafish produced a surprising lookalike of species long extinct.

The phenomenon revealed in their experiments, called developmental plasticity, explains why a real Jurassic Park will continue to remain a distant concept, best suited for cinematic storytelling rather than scientific reality.

"The plasticity we found in the mutants is a key to the great mystery," says Dr. Tetsuto Miyashita, now a palaeontologist at the Canadian Museum of Nature and formerly postdoctoral scholar at the University of Chicago. He led the research team that also included scientists at the Universities of Alberta and Southern California. The results are published today in the Journal of Experimental Biology.

Miyashita is interested in the evolution of key characteristics in vertebrates, of which jaws were one of the first critical developments. "We generally think evolution adds new things. For example, the first jaws evolved in fish 450 million years ago, giving them the ultimate competitive edge over other living creatures. Today, we would starve and suffocate without jaws. But sometimes evolution goes the opposite way. Take away something that's been there for millions of years, and it suddenly opens up new evolutionary directions. My idea is to see it in action."

To do this, Miyashita bred zebrafish that had a mutation in a gene that instructs cells to form a hinge joint of the jaw. The mutant zebrafish are born without a jaw joint so the upper and lower jaws fuse into one - creating a gaping mouth that cannot close. With their wide eyes and gaping mouth, Miyashita reckons they resemble the figure in Edward Munch's artwork "The Scream".

Surprisingly, Miyashita observed that these mutants swimming in the aquarium were able to survive and thrive - despite the lack of a hinged jaw with which to bite. "Instead of gulping for food, the fish chase it until the food ends up in their great gape," says Miyashita. "They seem unable to move the lips or close the mouth - these fish literally have their jaws dropped, fixed in that position."

The researchers observed that the skulls of the jawless mutants were remodelled with a shortened face, expanded cheeks, and massive neck muscles - similar features that first appeared in some of the earliest known jawless fishes during the Silurian and Devonian Periods nearly half a billion years ago.

Known as anaspids and thelodonts, these long-extinct fish that swam in ancient oceans are far removed from the zebrafish's line of ancestry. But like the mutant zebrafish, the fossils of these creatures show that they also lacked biting jaws and presumably had a similar feeding strategy.

It seems like a Jurassic Park moment, as if Miyashita created Devonian jawless fish out of modern ones. But, he explains, there is a more nuanced answer. "The resemblance is more a coincidence than by design. Anaspids and thelodonts are distant cousins half a billion generations removed, " he says. "Zebrafish didn't come from them, so cannot 'go back' to them."

In essence, the mutant zebrafish experiments suggest that genetic engineering does not enable restoring an ancestor. It only allows superficial convergence of characteristics that mutants develop by necessity. "The finding sets an unrealistically high bar for a Jurassic Park-like scenario. Engineered similarities are skin-deep, but origins and contents are completely different."

Miyashita notes the scientific phenomenon of developmental plasticity is why features of extinct organisms sometimes appear in lab-made mutants, as in the highly publicized case of 'dino-chickens.' Although these types of mutants are sometimes referenced as a rewinding of the evolutionary clock, plasticity means they are no more than coincidences.

That said, these initial experiments do offer insights for future scientific research--especially for how extinct jawless fishes (the predecessors of today's fishes) might have fed, breathed, and swam. The mutant zebrafish can be studied by biologists to explore further why evolution makes an occasional "leap". Understanding how jaw fusion occurs in the mutants may also break a path for a new treatment of certain joint diseases.

Miyashita started his new position at the Canadian Museum of Nature April 1, 2020 during the COVID pandemic. This followed post-doctoral work at the University of Chicago where he completed the zebrafish experiments. Scientists at the University of Alberta contributed CT scans and analysis of the skull morphology. Miyashita plans to carry on his work with the mutant zebrafish by establishing another working "Devonian" aquarium at the museum.