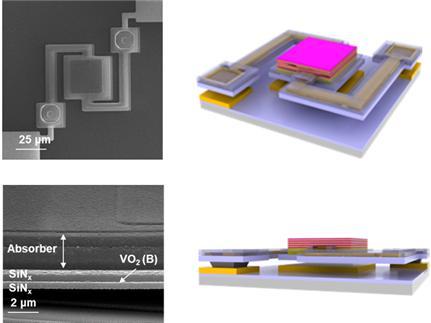 Thermal-imaging sensors that detect and capture images of the heat signatures of human bodies and other objects have recently sprung into use in thermostats to check facial temperatures in a contactless attempt to screen for COVID-19 at several building entrances. Under these circumstances, the smartphone industry is actively considering the incorporation of such sensors as portable features to create the add-on function of measuring temperature in real time. Additionally, the application of such technology to autonomous vehicles may facilitate safer autonomous driving.

A research team lead by Dr. Won Jun Choi at the Center for Opto-Electronic Materials and Devices in the Korea Institute of Science and Technology (KIST) has announced the development of a thermal-imaging sensor that overcomes the existing problems of price and operating-temperature limitations through convergence research with the team of Prof. Jeong Min Baik from Sungkyunkwan University (SKKU). The sensor developed in this work can operate at temperatures upto 100 °C without a cooling device and is expected to be more affordable than standard sensors on the market, which would in turn pave the way for its application to smartphones and autonomous vehicles.

To be integrated with the hardware of smartphones and autonomous vehicles, sensors must operate stably without any difficulties at high temperatures of 85 °C and 125 °C, respectively. For conventional thermal-imaging sensors to meet this criterion, an independent cooling device would be required. However, high-end cooling devices that promise quality come at a price of over two million Korean won; even such devices do not make the sensor suitable for operations at temperatures as high as 85 °C. Therefore, the conventional thermal-imaging sensors have not been applied in these fields.

A joint research team from KIST and SKKU has developed a device using a vanadium dioxide (VO2)-B film that is stable at 100 °C. This device detects and converts the infrared light generated by heat into electrical signals; this eliminates the need for cooling devices, which account for over 10% of the cost of thermal-imaging sensors and consume large amounts of electricity. The device was able to obtain the same level of infrared signals at 100 °C as at room temperature. Furthermore, as a result of fabricating and using an infrared absorber that can absorb as much external infrared light as possible, heat signatures were detected with three times more sensitivity and converted into electrical signals. The device shows around 3 milliseconds of response time even at 100 °C, which is about 3~4 times faster than conventional ones. Such high response speeds enable the device to capture thermal images at 100 frames per second, far exceeding the conventional level of 30-40 frames per second. This makes the device an interesting candidate for use in autonomous vehicles, as well.

Dr. Choi of the KIST said, "By means of our work with convergence research in this study, we have developed a technology that could dramatically reduce the production cost of thermal-imaging sensors. Our device, when compared to more conventional ones, has superior responsivity and operating speed. We expect this to accelerate the use of thermal-imaging sensors in the military supply, smartphone, and autonomous vehicle industries."