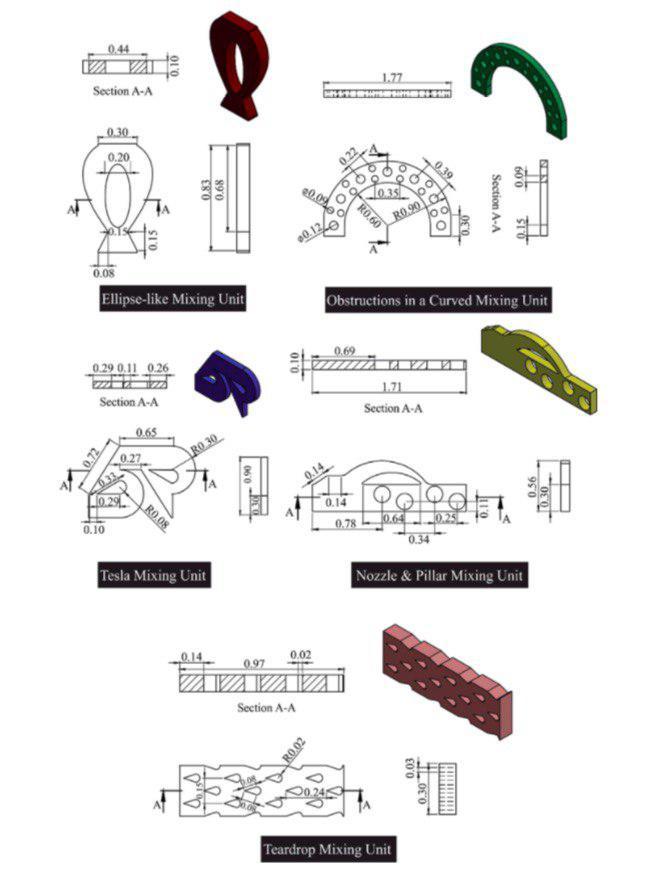 IMAGE: These are components of the mixing system (scaled). All measurements are in mm.

An international team of scientists including an employee of I.M. Sechenov First Moscow State Medical University (MSMU) developed a device for mixing chemical and biological reaction feeds. The team managed to increase the mixing efficiency up to 90%. The new device will be used in biological and chemical experiments. The article of the scientists was published in the RSC Advances journal.

Small mixing devices are used in biological and chemical research in the course of experiments. For example, in biology such mixers are used for analysis, purification, and synthesis of DNA, as well as for the delivery of medicinal drugs. In chemistry they are necessary for carrying out reactions.

There are two types of mixing devices - active and passive ones. In the first group the principle of operation is based on the use of external forces, such as magnetic fields, heat, acoustic fluctuations, and so on, that accelerate the mixing process. However, due to complicated construction they have reduced reliability and service life. Therefore, the second type of mixing devices that uses only the energy of flow movement is considered more prospective. Passive mixers create a turbulent flow - the flow of liquid that causes it to exchange substance between its layers. The efficiency of this method directly depends on a mixer's geometry. As a rule, it consists of one or several metal plates placed one after another in a small tube. Each plate has a considerable number of holes of different shapes and sizes. They direct the flows of liquid and secure their efficient mixing.

A team of sciences from Iran, Australia, and Russia used existing mathematical models of liquid mixing and developed five different variants of passive mixers. Each has its own unique geometry and mixing characteristics. After that the scientists added them one by one into one system named a hybrid micro mixer.

The new mixing device consists of six consequent metal plates with holes of different shapes. By changing the combinations of elements, the researchers created a micro mixer that secures almost 100% mixing of two liquids with low viscosity and 90% - with high viscosity.

"Micro mixers can be used in medical, chemical, and biological research. We've created a hybrid micro mixer and compared it with other mixing devices by mixing efficiency. Our device turned out to be applicable to a wide range of biological studies. The suggested micro mixer has different construction elements that helped us combine the mixing methods. It secures high process efficiency and is designed to replace the existing models of passive micro mixers," said Majid Warkiani, a co-author of the work and a research associate of the laboratory of nanotheranostics at MSMU and of the Institute of Biomedical Materials and Devices, University of Technology Sydney.