After completing a two-year pilot phase, scientists at the Woods Hole Research Center are expanding the scope of the "National Biomass and Carbon Dataset" for the year 2000 (NBCD2000), the first ever inventory of its kind, by moving into the production phase. 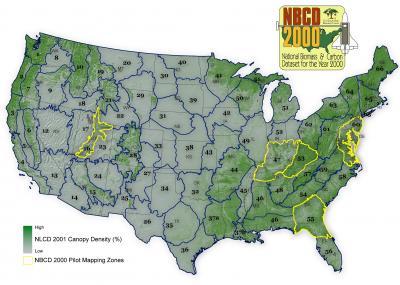 To date, 5 of the 66 mapping zones have been completed in the NBCD2000 project. The remaining 61 will be completed at an approximate rate of one every seven working days. Credit: Wayne Walker/Greg Fiske. Woods Hole Research Center.

Through a combination of NASA satellite datasets, topographic survey data, land use/land cover data, and extensive forest inventory data collected by the U.S. Forest Service – Forest Inventory and Analysis Program (FIA), NBCD2000 will be an invaluable baseline data set for the assessment of the carbon stock in U.S. forest vegetation and will improve current methods of determining carbon flux between vegetation and the atmosphere. Work on the remaining 61 mapping zones will be completed at a rate of roughly one zone every seven working days.

According to Josef Kellndorfer, an associate scientist at the Center who is leading the project, "Understanding this flux is critical for the quantification and prediction of atmospheric CO2 concentrations, a major determinant of the greenhouse warming effect in the climate system. Thus, this initiative will directly support the North American Carbon Program, which is a major component of the U.S. Climate Change Research Program."

In the NBCD2000 initiative, begun in 2005, data is being analyzed in 66 ecologically diverse regions, termed "mapping zones", which span the conterminous United States. Within each mapping zone data from the 2000 Shuttle Radar Topography Mission are combined with topographic survey data from the National Elevation Dataset (NED) to produce a radar-based height map of vegetation. Subsequently, this map is converted to estimates of actual vegetation height, biomass, and carbon stock using survey data from the U.S. Forest Service – FIA program and ancillary data sets from the National Land Cover Database 2001 (NLCD2001) project. The NLCD2001 data layers are crucial inputs to the NBCD2000 project as they provide land cover and canopy density information used in the stratification/calibration process.

An initial two-year pilot phase (May 2005-2007) served as an iterative period of research devoted to algorithm development, testing, and subsequent refinement. Though this work, an in-depth understanding of the functional relationships between vegetation canopy height and estimates of aboveground biomass and carbon stocks was obtained. During the pilot phase, mapping was completed for five of the 66 mapping zones within the conterminous U.S. (See graphic.) These zones include, in order of completion, 16 (central Utah), 60 (Chesapeake Bay area), 55 (southern Georgia/northern Florida), 47 (western Kentucky), and 53 (central Appalachians). Mapping zone selection was based on (1) geographic distribution, (2) data availability, (3) data quality, (4) community interest, and (5) research potential.

Wayne Walker, a post-doctoral fellow at the Center who is also working on the project adds, "It has been very exciting for us to make use of synergies afforded by the fusion of optical and interferometric radar data. To address the considerable demands for data throughput, novel software was developed to utilize the newly acquired Woods Hole Research Center High Performance Computing Cluster. The new parallel computing algorithms have significantly increased our processing speed such that we are now able to complete one mapping zone every seven days."

May 1 marks the official beginning of the two-year (May 2007-2009) production phase and coincides with the formal receipt of additional funding from NASA's Terrestrial Ecology Program. All NBCD2000 data products will be made available for download on a zone-by-zone basis and free of charge from the Seamless Data Distribution System operated by the U.S. Geological Survey as well as from an NBCD2000 project website currently under development (check www.whrc.org for availability). The entire project is scheduled to finish in early 2009.