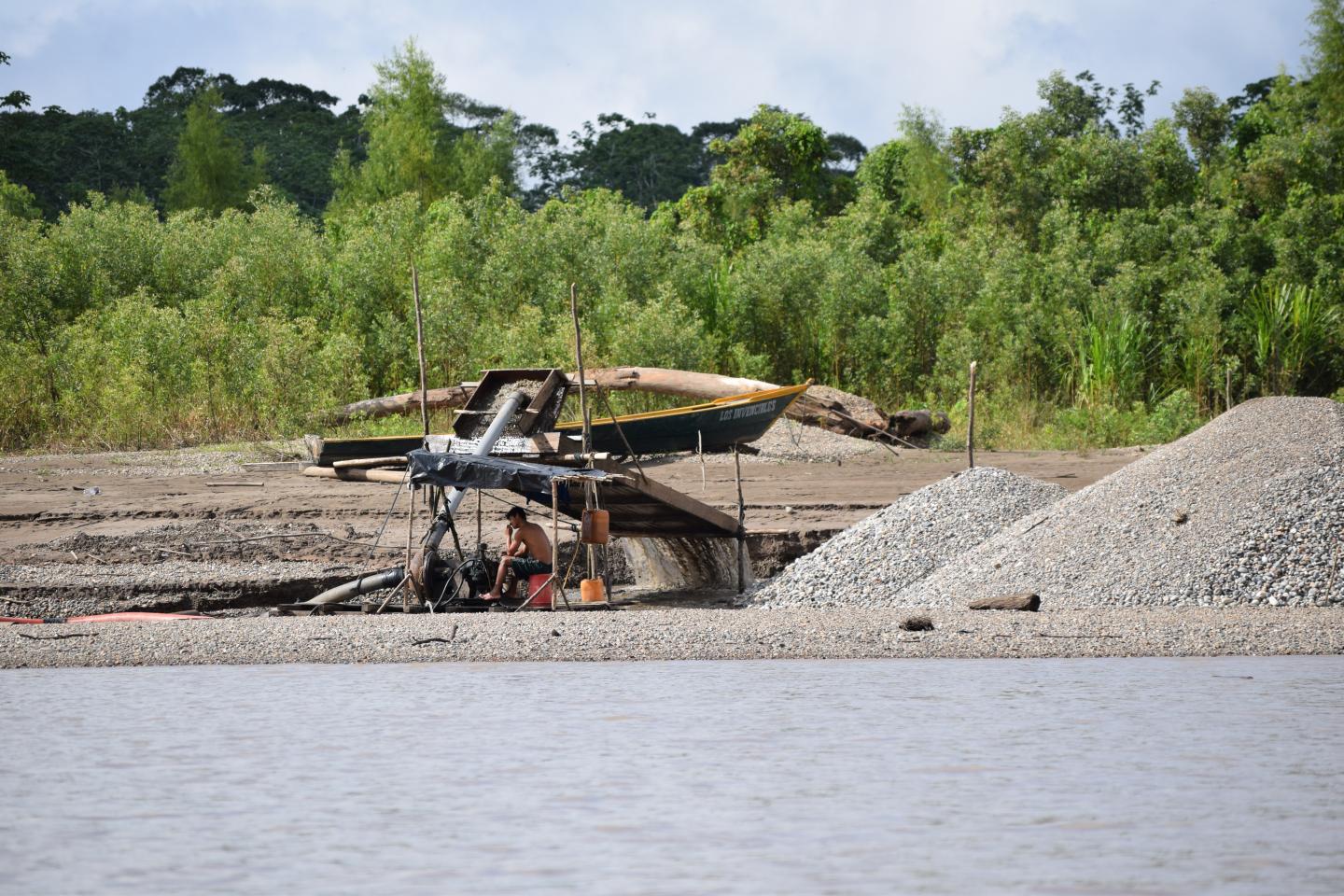 IMAGE: Small-scale, artisanal mining operations such as the one shown here causes deforestation, which in turn leads to erosion that exasperates the release of mercury into the local watershed.

DURHAM, N.C. -- Scientists from Duke University have developed a model that can predict the amount of mercury being released into a local ecosystem by deforestation and small-scale gold mining.

The research, which appears online on December 11 in the journal Environmental Science and Technology, could point toward ways to mitigate the worst effects of mercury poisoning in regions such as those that are already experiencing elevated mercury levels caused by gold mining.

"We've taken a lot of ground measurements in the Peruvian Amazon of mercury levels in the water, soil and fish," said Heileen Hsu-Kim, professor of civil and environmental engineering at Duke University. "But many areas in the Amazon aren't easily accessible, and the government often does not have the resources needed to test local sites."

"When you clear the land for mining, it leaves behind a landscape that basically went from lush greenery to barren desert," said Hsu-Kim. "You can easily see the effects in satellite images. If (governments) could use publicly available satellite imagery to identify areas that are likely to be contaminated, it could help them make informed policy decisions to protect public health."

The past two decades have seen a sharp increase in illegal and informal gold mining in Peru's southern Amazon region of Madre de Dios. These small-scale operations typically involve cutting down all of the trees in a particular area, digging a large pit and then using mercury to extract gold from the excavated soil.

After larger, coarse particles are separated, the remaining fine soil is combined with water and mercury inside a large drum much like an oil barrel, and shaken. The mercury binds to any gold in the soil, creating a large chunk that can be easily removed. This chunk is then burned, evaporating and releasing the mercury into the air while leaving behind pure gold.

Besides releasing mercury into the atmosphere, miners typically add three to four times more mercury to each barrel than is actually needed, says Hsu-Kim. While this ensures all of the gold is extracted, it also means there is a large amount of leftover mercury in the slurry that is inevitably dumped back into the excavated pit.

And because the whole process started with the clearing of trees, there's nothing to stop the mercury-laden soil from eroding into nearby rivers.

"While the local mercury levels might only double due to the mining itself, the effect of the erosion creates a four-fold increase in the amount of mercury being released into local rivers," said Hsu-Kim.

"This means mining practices can hit people three times with mercury -- once from direct contact, once from atmospheric transport and deposition, and once from soil mercury mobilization due to land clearing," said William Pan, the Elizabeth Brooks Reid and Whitelaw Reid Associate Professor of Population Studies at Duke. "The scenarios we run demonstrate that even if mining were to end today, since vegetation is unlikely to return for several decades, the cleared land will continue to release mercury."

Hsu-Kim and Pan worked with graduate students Sarah Diringer and Axel Berky to build a model to predict the amount of mercury and other contaminants being released into rivers. It combines data from a watershed erosion model, local variables such as annual rainfall, landscape and soil types, and data gathered about deforestation from satellite imagery.

When they analyzed mercury content in samples of soil and water from nine locations in the Colorado River watershed in Madre de Dios, they found that their model accurately predicted which areas were likely to have higher water concentrations of mercury.

The model suggests that over the last two decades, deforestation has doubled the amount of mercury entering local water sources in the Colorado River watershed, and increased it four-fold in the Puquiri subwatershed. Their model also suggests that if the current trends of deforestation continue, the amount of mercury being released into the local river systems may increase by 20 to 25 percent by 2030.

While the findings may sound bleak, the fact that the model works does offer some light at the end of the tunnel.

"We have shared our model with the Peruvian Ministry of Environment and Ministry of Health," Pan said. "We are working with them to evaluate whether our approach can be used as a tool for developing new policies regarding mining, environmental monitoring of mercury and human exposure."