Tiny crustaceans called copepods rule the world, at least when it comes to oceans and estuaries.

The most numerous multi-cellular organisms in the seas, copepods are an important link between phytoplankton and fish in marine food webs.

To understand and predict how copepods respond to environmental change, scientists need to know not only how many new copepods are born, but how many are dying, say biological oceanographers David Elliott of the University of Maryland Center for Environmental Science and the Virginia Institute of Marine Science (VIMS), and Kam Tang of VIMS.

Elliott and Tang realized there was only one way to discover the answer: find the copepods' carcasses.

Mortality of copepods and other zooplankton is often assumed to be the result of predators.

Several studies have observed, however, that many dead copepods are found in samples of seawater. "This is more indicative of non-predatory mortality," says Elliott.

But traditional sampling often ignores the live/dead "status" of the copepods, Elliott says, and little is known about how many copepod carcasses are in fact floating around in the water. 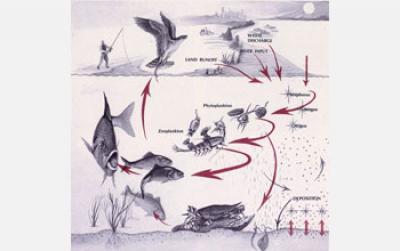 Copepods play an important role in the food webs of estuaries like the Chesapeake Bay.

An average of 12 to 30 percent of the developmental stages of the abundant coastal copepod species Acartia tonsa were dead.

They found that these were likely the result of mortality for other reasons than predators.

"Using a relatively simple staining procedure to distinguish live from dead copepods, Elliott and Tang have been able to arrive at a more accurate picture of predation versus other sources of mortality for estuarine copepod populations," says David Garrison, program director in the National Science Foundation's (NSF) Division of Ocean Sciences, which funded the research.

The results were published today in the journal Marine Ecology Progress Series.

"We found that mixing in the water was enough to keep many carcasses in suspension in places like the shallows of Chesapeake Bay," says Elliott. 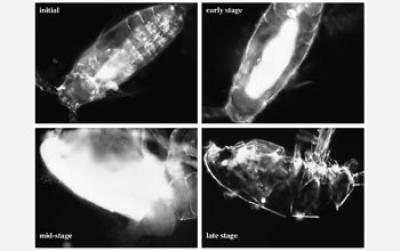 "Applying the results to the deeper open ocean, copepod carcasses become less dense as they decompose, such that they can reach neutral buoyancy and float around for some time before reaching the sea floor."

Much of the organic matter from copepods that die of non-predatory causes is recycled in sea water, he believes, rather than being directly transferred to the ocean-bottom as the remains of copepods sink.

The information on the fate of copepod carcasses was then used to estimate the rate at which copepods in Chesapeake Bay die from non-predatory causes.

Non-predatory copepod deaths accounted for more than ten percent of all mortality. The finding provides a more accurate view of how copepod abundance changes throughout the year.

"The presence of copepod carcasses in the marine environment indicates the importance of non-predatory mortality factors," says Elliott. "It represents a diversion of energy from the traditional food chain that supports fish, to one that fuels microbes.

"A better understanding of the factors causing non-predatory mortality will improve predictability of the amount of copepod prey available to fish."

That knowledge, in turn, may lead to new ways of looking at the abundance of fish in Chesapeake Bay--and beyond. 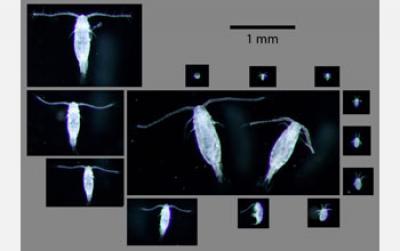 The copepod Acartia tonsa has 13 developmental stages, from egg through adult (clockwise).