For the first time, a text has been found in Old Persian language that shows the written language in use for practical recording and not only for royal display.

The text is inscribed on a damaged clay tablet from the Persepolis Fortification Archive, now at the Oriental Institute at the University of Chicago. The tablet is an administrative record of the payout of at least 600 quarts of an as-yet unidentified commodity at five villages near Persepolis in about 500 B.C.

The discovery of small perforated sea shells, in the Cave of Pigeons in Taforalt, eastern Morocco, has shown that the use of bead adornments in North Africa is older than thought. Dating from 82 000 years ago, the beads are thought to be the oldest in the world.

As adornments, together with art, burial and the use of pigments, are considered to be among the most conclusive signs of the acquisition of symbolic thought and of modern cognitive abilities, this study is leading researchers to question their ideas about the origins of modern humans.

The long-running controversy about the origins of the Etruscan people appears to be very close to being settled once and for all.

Professor Alberto Piazza, from the University of Turin, Italy, will say that there is overwhelming evidence that the Etruscans, whose brilliant civilisation flourished 3000 years ago in what is now Tuscany, were settlers from old Anatolia (now in southern Turkey).

Samuel Isaac Weissman, a professor and chemist who helped develop the first atomic bomb as part of the Manhattan Project, has died, his wife said Friday. He was 94.

Weissman died Tuesday in St. Louis. His wife, Jane Loevinger, said a cause of death was not known.

Weissman's work with lasers and resonant energy transfer methods at the University of California at Berkeley was cut short when he became one of the first scientists to arrive in Los Alamos, N.M., to work on the Manhattan Project during World War II.

The Swedes Get A Jurassic Tree

A specimen of the Wollemi pine, an Australian conifer and one of the world's oldest tree species, has been donated to Bergianska Garden at Stockholm University in Sweden.

The Wollemi was discovered on September 10, 1994, in an isolated valley in Wollemi National Park in New South Wales, about 150 km northwest of Sydney. It is estimated to be about 200 million years old, from earth's Jurassic Period, so it was around even before the Australian continent was formed.Wollemi Pine sample

Great news for imbibers. A new study suggests that alcohol may protect against rheumatoid arthritis and more of it is better than less. The study says three glasses of wine, for example, has positive effects but 10 glasses a week is even better.

Solving the mysteries of immunity

The innate immune response is the body's first line of defense against pathogen infection. Dr. Xin Li (University of British Columbia) and colleagues report that three proteins work together in the MOS4-associated complex (MAC) to execute innate immunity in the mustard weed, Arabidopsis.

Yes, you can use bacteria to clean water

It may sound counterintuitive to use a microbial protein to improve water quality but some bacteria are doing just that to protect themselves from potentially toxic nanoparticles in their own environments, and clean up crews of the future could potentially do the same thing on a larger scale.

A method for increasing plants’ tolerance to salt stress and thus preventing stunted growth and even plant death has been developed. The method has significant consequences for dealing with soil salinization, which is an acute problem for a wide range of crops in many regions of the world. 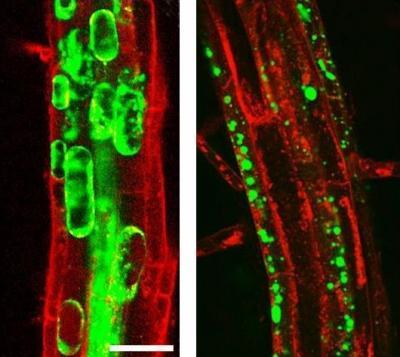 Magnified photo at left shows the invasion of heavy oxidation (green bubbles) in the membrane of a wild, stressed, salt-sensitive plant.

Physicists of the DZero experiment at the Department of Energy's Fermi National Accelerator Laboratory have discovered a new heavy particle, the Îb(pronounced "zigh sub b") baryon, with a mass of 5.774±0.019 GeV/c2, approximately six times the proton mass.

If you've ever thought about running a public company, Sarbanes-Oxley is something you probably dread. Commonly dubbed "The Enron Law", it requires enormous oversight paperwork with the consequence that Chairmen, CEOs and Directors can go to jail if they violate it. A new University of Georgia study finds that the 2002 law has altered the makeup of corporate boards, making them larger and more independent and also had the unintended effect of increasing director pay - by more than 50 percent.

The tragedy of Galapagos seabird divorce

Even Nazca booby families don't stay together after the kids leave the nest these days. The Nazca booby is a long-lived seabird found in the Galapagos Islands off the coast of Ecuador.

Many Nazca booby females switch mates after successfully raising a chick, according to a Wake Forest University study.You'll be alone again soon, booby

Measuring The Speed Of Cosmic Death

Using a robotic telescope at the ESO La Silla Observatory, astronomers have for the first time measured the velocity of the explosions known as gamma-ray bursts. The material is travelling at the extraordinary speed of more than 99.999% of the velocity of light, the maximum speed limit in the Universe.