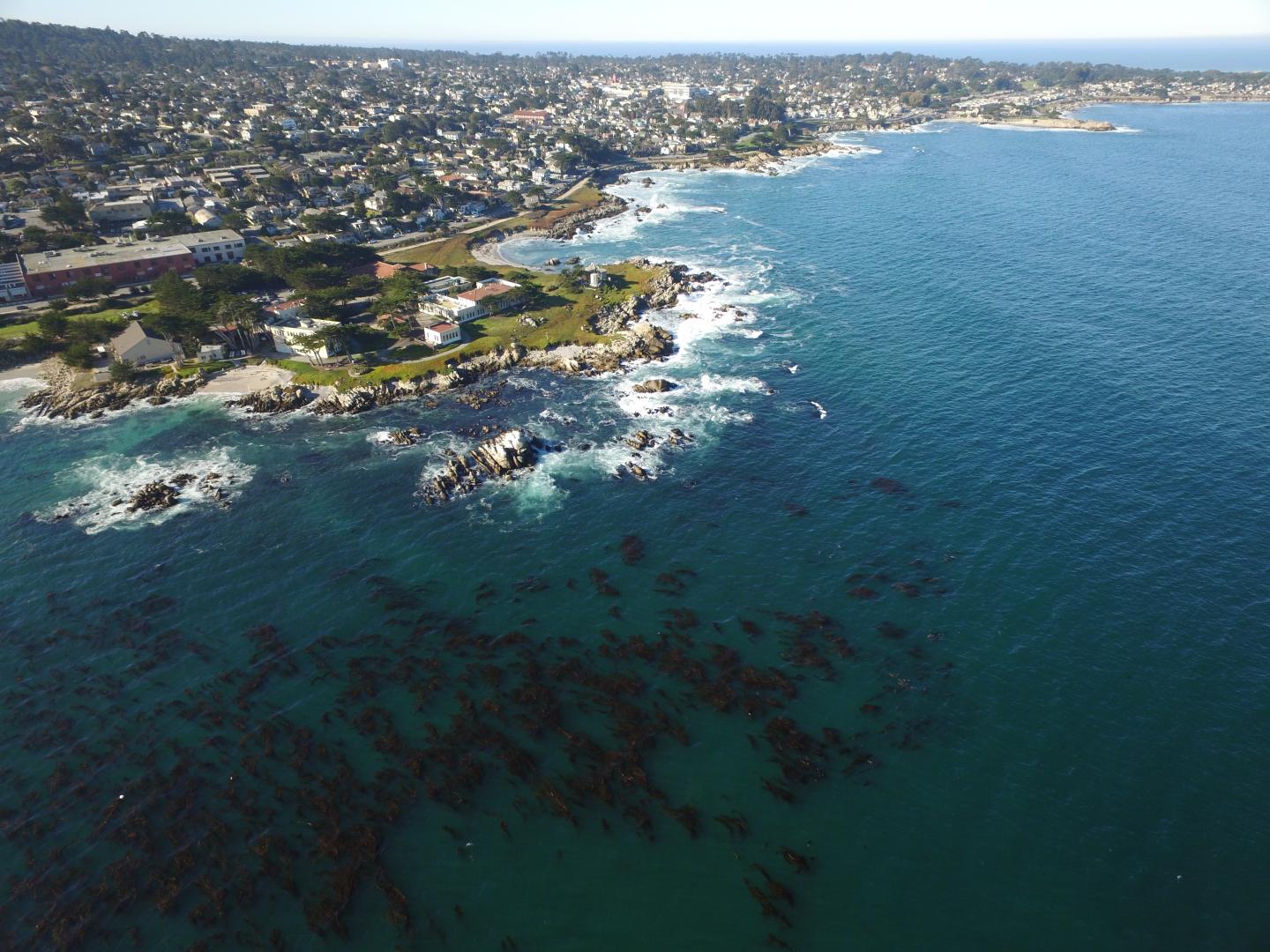 IMAGE: Aerial drone photo of the kelp forest canopy on the protected side of Cabrillo Point. Hopkins Marine Station is on the point in the upper left corner. (Image credit: Heidi...

Ethereal, swaying pillars of brown kelp along California's coasts grow up through the water column, culminating in a dense surface canopy of thick fronds that provide homes and refuge for numerous marine creatures. There's speculation that these giant algae may protect coastal ecosystems by helping alleviate acidification caused by too much atmospheric carbon being absorbed by the seas.

A new on-site, interdisciplinary analysis of giant kelp in Monterey Bay off the coast of California sought to further investigate kelp's acidification mitigation potential. "We talk about kelp forests protecting the coastal environment from ocean acidification, but under what circumstances is that true and to what extent?" said study team member Heidi Hirsh, a PhD student at Stanford's School of Earth, Energy & Environmental Sciences (Stanford Earth). "These kinds of questions are important to investigate before trying to implement this as an ocean acidification mitigation strategy."

The team's findings, published on Oct. 22 in the journal JGR Oceans, show that near the ocean's surface, the water's pH was slightly higher, or less acidic, suggesting the kelp canopy does reduce acidity. However, those effects did not extend to the ocean floor, where sensitive cold-water corals, urchins and shellfish dwell and the most acidification has occurred.

"One of the main takeaways for me is the limitation of the potential benefits from kelp productivity," said Hirsh, the lead author on the study.

Kelp is an ecologically and economically important foundation species in California, where forests line nutrient-rich, rocky bottom coasts. One of the detrimental impacts of increased carbon in the atmosphere is its subsequent absorption by the planet's oceans, which causes acidification - a chemical imbalance that can negatively impact the overall health of marine ecosystems, including animals people depend on for food.

Kelp has been targeted as a potentially ameliorating species in part because of its speedy growth - up to 5 inches per day - during which it undergoes a large amount of photosynthesis that produces oxygen and removes carbon dioxide from the water. In Monterey Bay, the effects of giant kelp are also influenced by seasonal upwelling, when deep, nutrient-rich, highly acidic water from the Pacific is pulled toward the surface of the bay.

"It's this very complicated story of disentangling where the benefit is coming from - if there is a benefit - and assessing it on a site-by-site basis, because the conditions that we observe in southern Monterey Bay may not apply to other kelp forests," Hirsh said.

The researchers set up operations at Stanford's Hopkins Marine Station, a marine laboratory in Pacific Grove, California, and collected data offshore from the facility in a 300-foot-wide kelp forest. Co-author Yuichiro Takeshita of the Monterey Bay Aquarium Research Institute (MBARI) provided pH sensors that were distributed throughout the area to understand chemical and physical changes in conjunction with water sampling.

"We are moving beyond just collecting more chemistry data and actually getting at what's behind the patterns in that data," said co-principal investigator Kerry Nickols, an assistant professor at California State University, Northridge. "If we didn't look at the water properties in terms of how they're changing and the differences between the top and the bottom of the kelp forests, we really wouldn't understand what's going on."

With the new high-resolution, vertical measurements of pH, dissolved oxygen, salinity and temperature, the researchers were able to distinguish patterns in the seawater chemistry around the kelp forest. At night, when they expected to see more acidic water, the water was actually less acidic relative to daytime measurements - a result they hypothesize was caused by the upwelling of acidic, low oxygen water during the day.

"It was wild to see the pH climb during the night when we were expecting increased acidity as a function of kelp respiration," Hirsh said. "That was an early indicator of how important the physical environment was for driving the local biogeochemical signal."

While this project looked at kelp's potential to change the local environment on a short-term basis, it also opens the doors to understanding long-term impacts, like the ability to cultivate "blue carbon," the underwater sequestration of carbon dioxide.

"One of the reasons for doing this is to enable the design of kelp forests that might be considered as a blue carbon option," said co-author Stephen Monismith, the Obayashi Professor in the School of Engineering. "Understanding exactly how kelp works mechanistically and quantitatively is really important."

Although the kelp forests' mitigation potential in the canopy didn't reach the sensitive organisms on the sea floor, the researchers did find an overall less acidic environment within the kelp forest compared to outside of it. The organisms that live in the canopy or could move into it are most likely to benefit from kelp's local acidification relief, they write.

A model for future study

The research also serves as a model for future investigation about the ocean as a three-dimensional, fluid habitat, according to the co-authors.

"The current knowledge set is pretty large, but it tends to be disciplinary - it's pretty rare bringing all these elements together to study a complex coastal system," said co-PI Rob Dunbar, the W.M. Keck Professor at Stanford Earth. "In a way, our project was kind of a model for how a synthetic study pulling together many different fields could be done."