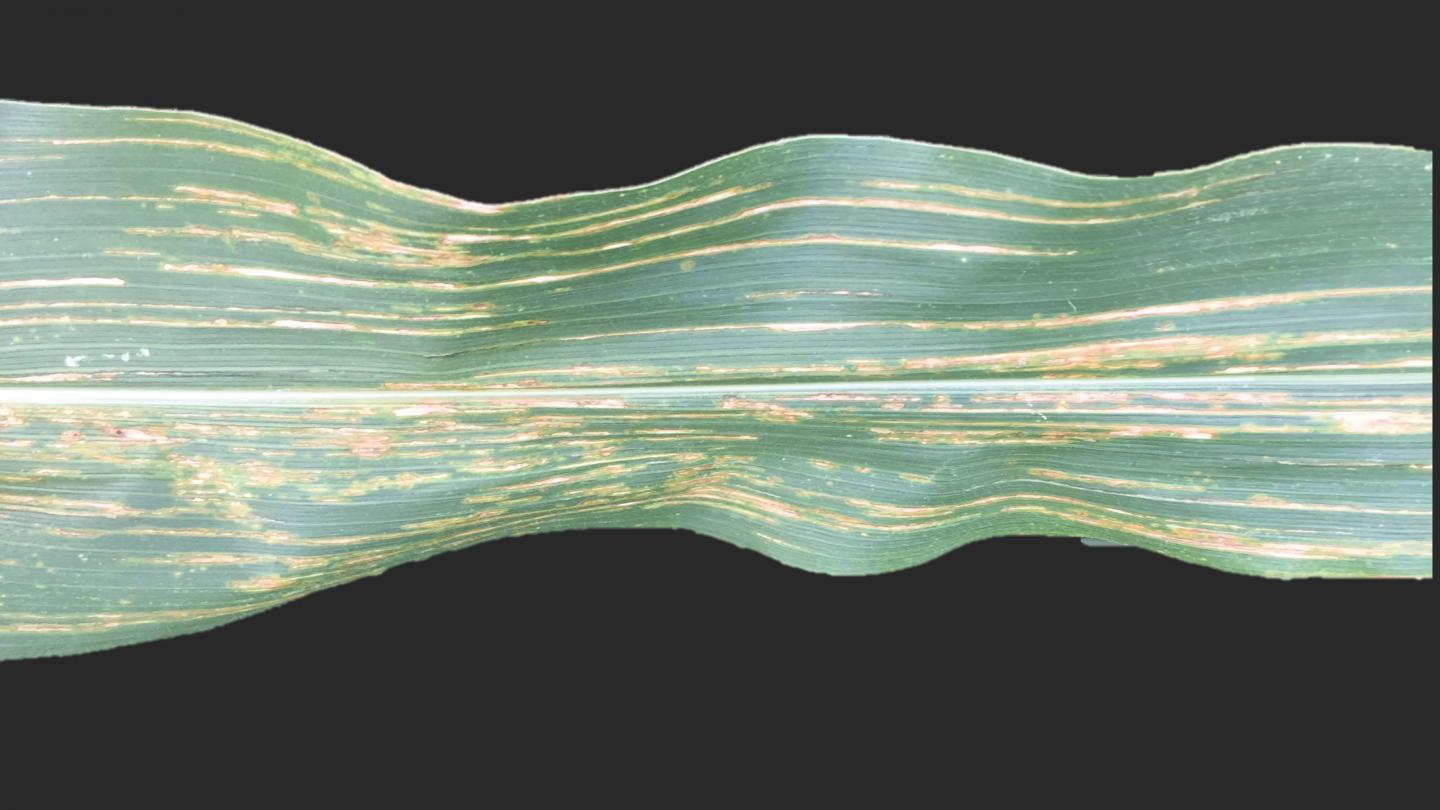 IMAGE: Developing host resistance to bacterial leaf streak in corn will be critical to battling the disease. A new University of Illinois study moves closer to host resistance by identifying key...

URBANA, Ill. - Bacterial leaf streak, a foliar disease in corn, has only been in the United States for a handful of years, but Tiffany Jamann says it's a major problem in the Western Corn Belt.

"We don't have hard numbers yet, but this pathogen in other systems can cause up to 20% yield losses," says Jamann, an assistant professor in the Department of Crop Sciences at the University of Illinois and co-author of a new study in the journal Crop Science. "There's no effective chemical control. Fungicides don't work, as it's a bacterial disease. That's why host resistance is going to be critical, just as it is for controlling other bacterial diseases of corn, such as Goss's wilt and blight."

The disease-causing bacteria squirm in through open pores - stomata - on the leaf surface, then set up shop between veins to form long greyish streaks. Although no one has determined precisely what's happening inside the plant, Jamann says the necrotic lesions are disrupting the photosynthetic capacity of the leaf. And that hurts yield.

To make matters worse, bacterial leaf streak looks similar to a fungal disease of corn, gray leaf spot. Farmers may confuse the two diseases and spray fungicide, which is not only ineffective, it's an unnecessary cost.

Currently, there is no chemical control agent for bacterial leaf streak, and no completely resistant corn hybrids exist. But, in the Crop Science study, Jamann and her collaborators make a promising discovery that could lead to resistant lines in the future.

By inoculating 26 diverse corn lines with the disease and selecting promising lines for further analysis, they found corn varieties with moderate resistance and genetic regions associated with increased levels of resistance.

"Although we didn't identify any large-effect resistance genes, the study is the first report of host resistance to bacterial leaf streak that has ever been published," Jamann notes.

"We find that the genetic architecture of resistance is complex, with lots of regions of the genome contributing to resistance," Jamann says.

Although the researchers didn't identify a "smoking gun," the information provided in the study should still be useful to breeders in the process of developing new hybrids with resistance to bacterial leaf streak. And that's key.

"Management practices can only go so far in reducing losses due to this disease. You can't always control the conditions to avoid disease spread," Jamann says. "Ultimately host resistance is going to be critical."