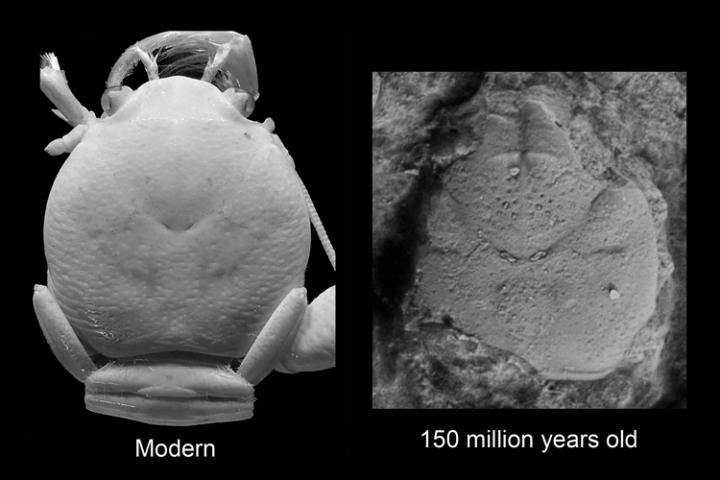 Coral reefs and the abundant life they support are increasingly threatened today, but a snapshot of a coral reef that flourished 150 million years ago shows that many animals were then at their peak of diversity, just offshore of the land ruled by dinosaurs.

In a paper published this month in the Zoological Journal of the Linnean Society, University of California, Berkeley, paleontologists describe a rich reef life during the Jurassic Period in the shallow sea covering what today is central Europe. The reef teemed with animals that snorkelers would recognize today -- fish, crabs, sea urchins, snails, clams and oysters -- but also now-extinct ammonites, which are essentially squid with external shells.

Joining them were 53 distinct species of squat lobsters, the rather unappealing name for creatures that South Americans relish as langostinos.

At a time of peak biodiversity for reef life in what was then the Tethys Sea, parasites also flourished. Some 10 percent of all the squat lobster fossils had bumps on their gill region that betrayed the existence of a blood-sucking parasite that was probably kin to the isopods that parasitize squat lobsters today.

"The reef would have looked similar to coral reefs today, just in terms of diversity and the fact that the corals back then belonged to the same group as the ones we see today," said lead author Cristina Robins, a senior museum scientist at the University of California Museum of Paleontology at UC Berkeley. She personally has described more than 50 new fossil species of squat lobsters, or galatheoids, over the past decade: about 30 percent of known fossil species.

"Squat lobsters became very diverse for the first time in Earth's history at the end of the Jurassic, alongside true crabs, which means that the Late Jurassic coral-associated habitats were key ecosystems in the evolution of galatheoids and their parasites," she said.

"We know that reefs aren't doing well today because of coral bleaching and other factors," said co-author Adiel Klompmaker, a project scientist in the Department of Integrative Biology. "If these ecosystems continue to deteriorate, it is very likely that associated organisms, including the squat lobsters, are going to take a big hit, as well, in terms of their abundance and diversity."

Squat lobsters: not lobsters, not crabs

As one of just a few experts worldwide on squat lobsters fossils, Robins admits that these animals -- living and extinct -- are underappreciated and understudied, even though they are one of most diverse groups of macrocrustaceans living today, with about 1,250 known species.

On reefs, where most people might encounter them, squat lobsters tend to be about the size of the fingernail on your little finger and easily missed. But some species living in Chile, Peru and Norway grow up to half-foot long and are harvested and sold as langostinos, a marketing term for the meaty tails of these and other lobster-like marine creatures.

They are found worldwide in many ocean environments, including the continental shelf and the deep sea. Large ones often congregate by the hundreds at hydrothermal vents in the abyss miles under the water's surface.

If you did see a squat lobster, you could easily mistake it for either a crab or a true lobster, though it is neither. The often-colorful porcelain crabs, or Porcellanidae -- popular for salt-water aquariums -- are squat lobsters but look nearly identical to true crabs, distinguished primarily by an easily overlooked tail tucked underneath. On the other hand, many squat lobsters look like small-clawed versions of the Maine lobster and have a similarly meaty and tasty, though smaller, tail.

"Most of the squat lobsters look like a crayfish: a lobster, but somewhat squished," Robins said. "But the squat lobsters have secondarily evolved a crab-like body in the porcelain crabs. That body shape helps in rocky intertidal areas."

In her quest to understand the diversity of these animals since they first appeared about 180 million years ago, Robins has studied fossils in collections around the world, but was blown away by a collection of 150 million-year-old fossils she stumbled across at the Vienna Museum of Natural History in Austria.

"I opened up several of their storage cabinets, and they contained nearly 7,000 decapods, a diverse group within crustaceans," Robins said. "The squat lobsters were a pretty high percentage of the number of decapods there: about 2,350 fossils, or a third. This collection is really special, just because they had a very dedicated collector who collected everything, so we have a really great snapshot of what the squat lobster fauna looked like, as well as some of the associated reef fauna."

Klompmaker, who is interested in the interactions between parasites and their hosts, was amazed by the isopod parasites visible as swellings on the carapaces of 10 percent of the squat lobster fossils. Today, parasites on squat lobsters are usually much less prevalent.

"Parasites such as isopods capitalized on the high abundance of their host and infected squat lobsters at rates not seen previously," he said. "This swelling in the gill region of the lobster's shell is caused a blood-sucking parasitic isopod crustacean, distant relatives and look-alikes of modern pill bugs. These are some of the oldest records of parasitism in galatheoids."

Robins and Klompmaker plan to continue their exploration of fossil squat lobsters in museum collections around the world, knowing that there are many undescribed species that can tell about reef life in the past and the ever-present warfare between parasites and their hosts.