Controlling the messenger with blue light 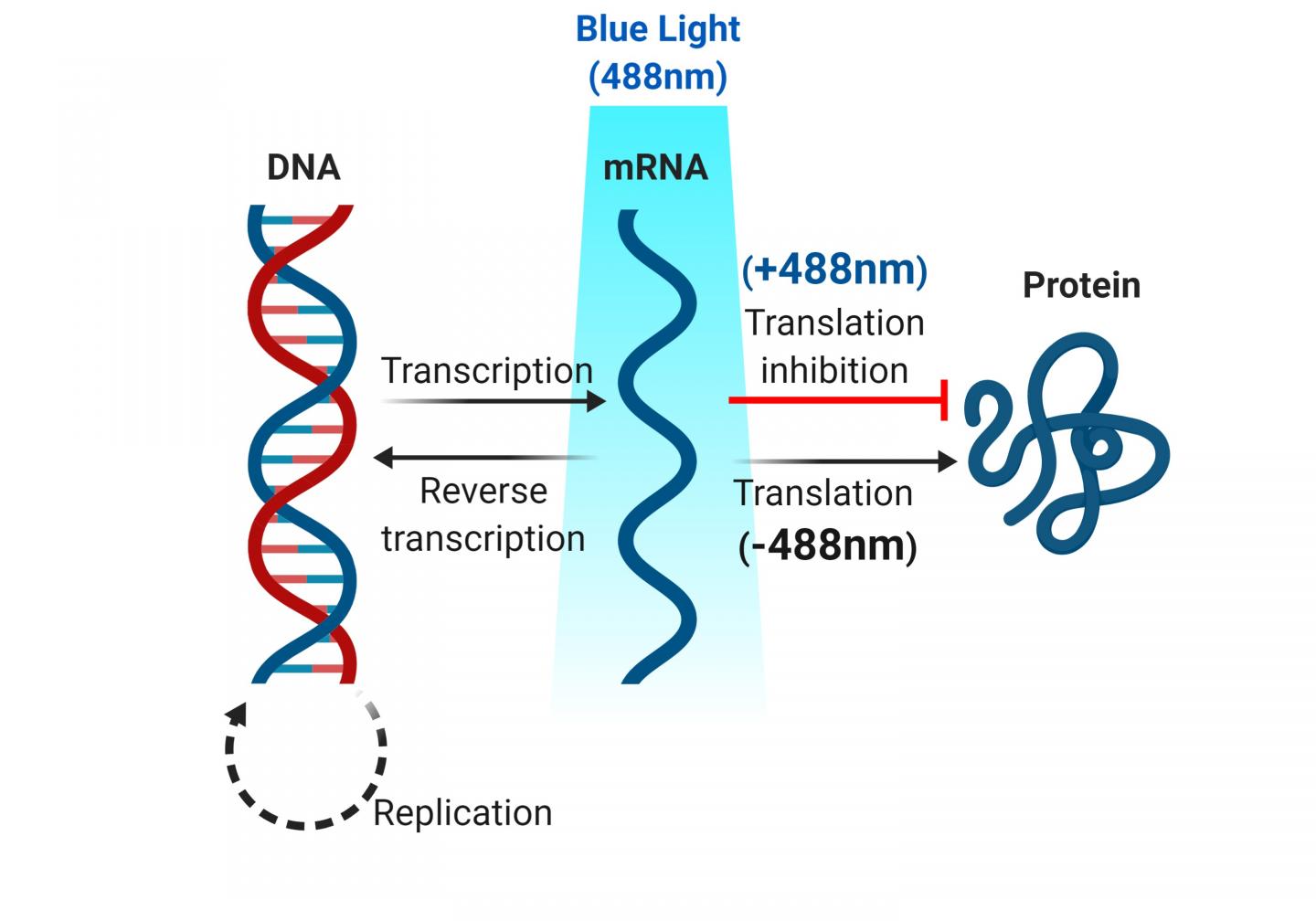 IMAGE: Optogenetic inhibition of mRNA translocation and translation in living cells. Blue light inactivation of protein translation from mRNA and the level of protein production is reduced with spatiotemporal precision.

Researchers at the Center for Cognition and Sociality, within the Institute for Basic Science (IBS, South Korea), have developed a new optogenetic tool to visualize and control the position of specific messenger RNA (mRNA) molecules inside living cells. Using this approach, published in Nature Cell Biology and the research highlights section of Nature Reviews Genetics, the authors revealed something new about cell migration that could not have been discovered with previously available methods.

Cells are so well organized that everything seems to happen at the right time, and at the right place. Protein synthesis, for example, is the result of proper mRNA localization and translation: mRNA carries the information to produce specific proteins and is transferred where the cell needs these proteins the most. Then, ribosomes help with the translation of the genetic message into proteins. Numerous studies have demonstrated that mRNA translation is tightly related to mRNA localization. However, conventional chemical-based methods are insufficient to fully address which mRNA molecules are responsible for which cellular behavior.

To directly investigate the causal relationship between the translation of specific mRNAs and specific biological processes, the IBS team developed an optogenetic method, called mRNA-LARIAT, that controls mRNA position and translation in living cells.

The mRNA-LARIAT uses blue light to trap specific mRNAs into large clusters. As a result, the mRNAs clusters are not able to interact with the ribosomes and the translation of the corresponding proteins reduces. While mRNA-blocking chemicals cannot be controlled at specific space and time, using light as a clear advantage you can turn it on and off where and when you want.

This optogenetic technique was developed by combining the LARIAT system (Light-Activated Reversible Inhibition by Assembled Trap), which was previously developed by the same group (Lee et al., 2014) to trap proteins within cells, with components that bind to the mRNA.

Thanks to this new method, IBS researchers studied the role of mRNA carrying the genetic information to produce the protein β-actin, a key element for cell movement and contraction. Despite the presence of a large amount of pre-existing, long-lived β-actin protein in the cells, the mRNA-LARIAT targeted to β-actin slowed the production of new β-actin proteins and attenuated cell motility effectively and reversibly within 20 minutes. These results suggest that β-actin translation is constantly required for cell migration and even a minute fraction of newly synthesized β-actin can have a profound effect on this process. The team also demonstrated a way to distinguish between newly synthesized β-actin protein and pre-existing β-actin.

"The mRNA-LARIAT is generally adaptable and able to rapidly and reversibly manipulate translation of target transcript that can further be used to provide insights of how function of different mRNAs are coordinated in space and time" says Won Do Heo, KAIST professor and leading author of this research.