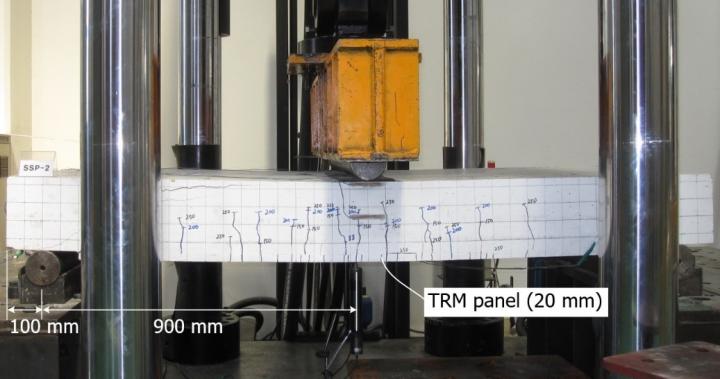 The Korea Institute of Civil Engineering and Building Technology (KICT) has announced the development of an effective structural strengthening method using a noncombustible carbon textile grid and cement mortar, which can double the load-bearing capacities of structurally deficient concrete structures and increase their usable lifespan by threefold.

More than 90% of infrastructures in South Korea, such as bridges and tunnels, as well as residential buildings were initially constructed out of concrete. For deteriorated or structurally deficient concrete structures in need of structural strengthening, carbon fiber sheets are typically applied to the surface of the concrete structure using organic adhesives. However, organic adhesives are susceptible to fire and cannot be applied to structures with wet surfaces. These carbon fiber sheets may detach and fall from the structure if they are exposed to moisture.

A research team in KICT, led by Dr. Hyeong-Yeol Kim, has developed an effective as well as efficient strengthening method for deteriorated concrete structures. With the developed method, thin precast textile reinforced mortar (TRM) panels, which are made of a carbon textile grid and a thin layer of cement mortar, are used. Furthermore, the TRM strengthening method can be applied in the form of cast-in-place construction. Employing KICT's method, 20 mm-thick TRM panels are attached to the surface of the existing structure, and then the space between the existing structure and the panels is filled with cement grout, with the cement grout serving as the adhesive.

Both the carbon textile and cement mortar are noncombustible materials that have a high resistance to fire, meaning that they can be effectively used to strengthen concrete buildings that may be exposed to fire hazards. The construction method can also be applied to wet surfaces as well as in the winter, and the panels do not fall off even in the event of water ingress. Additionally, unlike steel reinforcing bars, the carbon textile does not corrode, and thus it can be effectively used to strengthen highway facilities and parking buildings, where deicing agents are often used, as well as to strengthen offshore concrete structures that are exposed to a chloride-rich environment.

A failure test conducted in KICT indicates that the failure load of concrete structures strengthened with the TRC panel increased by at least 1.5 times compared to that of an unstrengthened structure. Furthermore, the chloride resistance of the TRM panel has been evaluated in order to assess its service life in a chloride-rich environment. The durability test and analysis of the TRM panel indicates that the lifespan of the panel is more than 100 years. This increase can be attributed to the cement mortar, developed by KICT, which contains 50% ground granulated blast furnace slag, an industrial byproduct generated at ironworks. The cement mortar, which has a higher fire resistance than conventional cement mortar, is also advantageous because its cost is half that of conventional mortar. In terms of economical efficiency, the newly developed method can reduce construction costs by about 40% compared to existing carbon sheet attachment methods.

The newly developed strengthening method uses thin TRM panels that are very versatile and can be used as building facades, repair and strengthening materials, and in other applications. In the future, if the panels can be fabricated with thermal insulators, it is expected that they will replace building insulation materials that are susceptible to fires.

Dr. Kim said, "For easier production and shipping, the TRM panels are manufactured in a relatively small size of 1 m by 2 m and must be connected at the construction site. A method for effectively connecting the panels is currently being developed, and performance tests of the method will be conducted by the end of 2020."