Computer arranges pictures based on their artistic aspects

It's a time-consuming process for a program to arrange pictures in a consistent order. It is even more complex to order them on the basis of visual characteristics. Computer scientists from Saarbrücken have developed a system to arrange pictures into a consistent order. It requires no more than a small number of pre-sorted example pictures. Operators of online portals or museums could use this technique, for example, to arrange complex datasets.

So far, if a nature photographer wanted to arrange pictures of various butterflies systematically based on color or size to create an illustrated book, he needed a lot of time: He would have to arrange the individual pictures of the animals on the computer by hand to bring them into the requested order. Suitable software that would have been able to arrange pictures automatically based on certain characteristics did not exist. 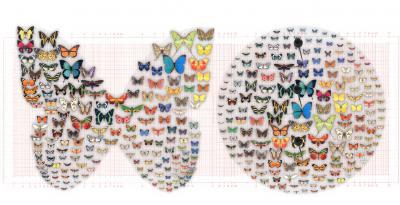 Saarbrücken computer scientists have developed a system to arrange pictures into a consistent order. It requires no more than a small number of pre-sorted example pictures. The illustration shows different butterflies organized horizontally by color variations and vertically by size.

Researchers at the Max Planck Institute for Informatics in Saarbrücken in the research group of Tobias Ritschel developed a method that makes it possible to arrange numerous pictures very fast. An algorithm orders them according to certain visual characteristics such as size and intensity. In so doing, the algorithm distributes the pictures consistent over the free space on the screen in such a way that they create a harmonious overall picture. "The main feature of our program is that it is able to capture the requests of the user", explains Ritschel, who is the head of the research group "Rendering and GPUs". "All he has to do is to click on three or more pictures with the mouse and drag them to certain points; for example, he places two up in the left corner and the other one down in the right corner. Following on this, the program calculates the requested order and arranges the picture correspondingly.

This method provides novel possibilities not only for photographers and photo editors, but also for online shops. "On the one hand, the operators of such shops could represent their products in a more compact and visually pleasing way than before", says Bernhard Reinert, who played a leading role within the development process. "On the other hand, our program works very flexibly, so that web designers can easily create their websites for different end-user devices like computers or smart phones". Moreover, museums could use this program for their exhibitions so that, for example, children could learn playfully by arranging pictures of coins, rocks or animals.

Reinert and his colleagues are already in conversation with prospective customers. In the next months, they want to improve their method in such a way that software is able to arrange pictures in three-dimensional space.